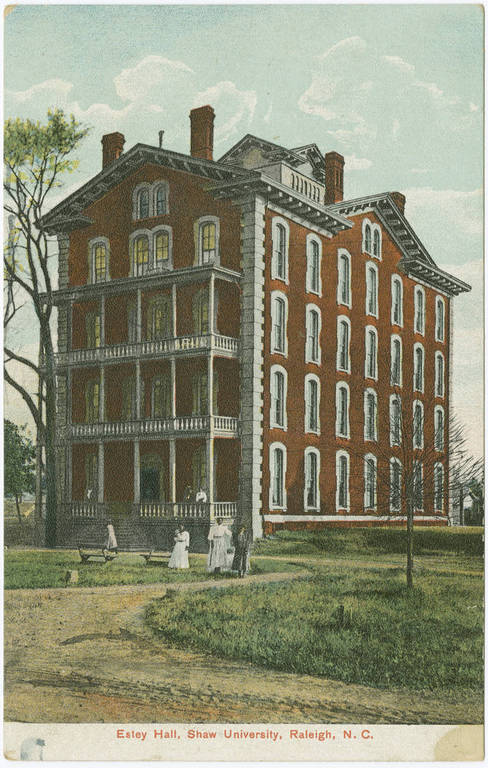 George S. H. Appleget (1831-January 12, 1880), architect and contractor in the immediate post-Civil War era, was a native of New Jersey who worked in Philadelphia and New York before coming to North Carolina in 1869. In 1860, he was listed as a master carpenter, aged 28, in Hightstown, New Jersey, with a family including his wife Catharine and four children. Part of a family long established in New Jersey, he was one of many New Jersey men named George Applegate or Appleget and may have been one of the men of that name who served in the Union army.

How he made the North Carolina connection is unknown. Soon after the war Appleget found opportunities in North Carolina through leaders seeking to rebuild the state’s and their own fortunes. A group of North Carolina entrepreneurs who formed the Ridgeway Company in 1867 persuaded him to invest in and design buildings for Ridgeway, a city they envisioned beside the North Carolina Railroad in Warren County. He bought land in and around “Ridgeway City” early in 1869 while still a resident of Mercer County, New Jersey, then moved to Ridgeway later that same year. Led by Dr. William J. Hawkins, Jonathan M. Heck, and others, the company laid out a town and erected a few buildings, but the city of Ridgeway never materialized. How many buildings were actually constructed there is not certain.

Doubtlessly encouraged by his Ridgeway friends, Appleget soon opened an office in Raleigh. By 1870, he was residing in the capital with his wife and children. He owned $35,000 in real estate, evidently the Ridgeway property. Building on the Ridgeway connection, for Jonathan and Mattie Heck, Appleget designed one of the first big houses in Raleigh after the war—the towered, Second Empire style Heck-Andrews House (1869-1870) on fashionable North Blount Street. His specifications and the contract with builders Wilson and Waddell (John M. Wilson and John A. Waddell), in the Jonathan M. Heck Papers (NCA&H) are among the most detailed such documents known in the state for a house of this era. A ca. 1870 drawing of a towered Second Empire style house in the W. J. Hawkins Papers (SHC) is attributed to Appleget. That house was evidently built in Raleigh for Hawkins, but has been lost.

Appleget advertised in the Raleigh Sentinel of January 18, 1870, that he had twenty years of experience as a builder in New York and Philadelphia and had “concluded to devote his whole time to architecture.” He offered designs and specifications at short notice for “buildings of any description.” He proposed that he could remodel “old buildings” with “French Roofs”—the mansard form distinguishing the Second Empire mode. He also worked in the bracketed, Italianate style, as exemplified by his elevation drawing of a symmetrical, center-gabled residence signed by him and noted as a residence for T. Avera, but which is essentially identical to the Andrews-Duncan House across the street from the Heck-Andrews House in Raleigh.

In the early 1870s, Appleget also designed some of Raleigh’s first postwar institutional edifices, including the Italianate style Estey Hall at Raleigh’s newly established Shaw University for black students. It is possible that he had a role in planning or building the college’s Main Building of 1872, which no longer stands. In 1872, indicative of his stature in the community, he was appointed architect for the State Penitentiary, to inspect the progress of construction of that facility, which had been designed by Ohio architect Levi T. Scofield and was superintended by William J. Hicks. Appleget was also commissioned to design a Masonic temple in Raleigh, but it remained unbuilt for lack of funds.

In the mid-1870s, he opened an office in Charlotte, where he had worked previously. From there he advertised in the Daily Charlotte Observer on May 26, 1875, as an architect and agent for iron fronts for buildings and other metal work. He promised to supply “working drawings in full, which will be found much plainer than those of any other man in the State” because of his fifteen years of experience as a builder and fourteen as an architect. He had at hand some five hundred drawings which potential clients were invited to view. Appleget stated that he had designed “all the best buildings, with only a few exceptions in Raleigh, Goldsboro, and Greensboro and almost all over the State.” He cited in Charlotte such work as an iron-fronted building, a store, and a number of private residences.

Not far from Charlotte stands his best known public edifice, the towered Second Empire style Cabarrus County Courthouse in Concord. He also built a jail for Cabarrus County. Because of a suit brought against him by John Wilkes of the Mecklenburg County Iron Works for a payment, the specifications for the Cabarrus County Jail survive in Wake County Miscellaneous Records.

Although Appleget cited his extensive work in Raleigh, Goldsboro, Greensboro, and Charlotte, few other buildings in those cities have been identified as his. However, timing and stylistic similarities suggest such possibilities as Greensboro’s Benbow Hotel (1871) and the Second Empire style main building of Bennett College (1878)—both long lost—and the towered, Second Empire style Banker’s House (1874-1875), a landmark of Shelby. Also attributed to him are Goldsboro’s Henry Weil House and Solomon Weil House (1875); for the Italianate style residences built for brothers Henry and Solomon Weil, family letters allude to a Raleigh architect but supply no name.

Appleget evidently returned to Ridgeway, where he bought a lot in 1879. He died at age 48 on January 12, 1880, and was identified in the Charlotte Democrat (January 23) as being “well known in this State as an architect and builder.”

Operating in a challenging period of change, Appleget sought to define himself as an architect rather than a builder. He stated in 1870 that he would design and “also superintend the erection of buildings, when desired, but does not take contracts, nor employ hands.” He wrote in 1871 from Charlotte to the American Institute of Architects in Washington, “If convenient I would like to have a price list of the fees adopted for the architect . . . as I wish to make my charges accord to those regular prices.” He also stressed his years of practical experience: “Some in this state claim to be Architects when they have no knowledge of the business and can only be called draftsmen, and need someone to instruct them at all times when they undertake a job.”