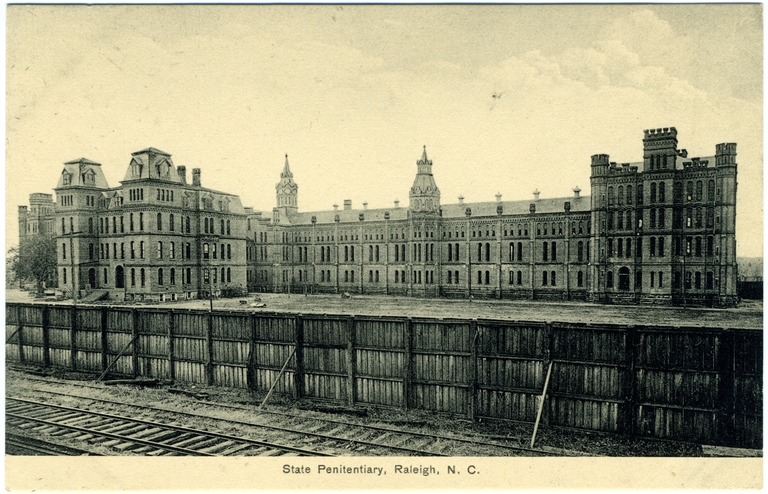 William J. Hicks (February 18, 1827-January 14, 1911), millwright, builder, contractor, architect, and prison warden, began his career in the 1850s and became a prominent figure in North Carolina construction after the Civil War. He epitomized the practical, ambitious, and adaptable men who made their way in the unsettled times after the war.

Hicks was born in Spottsylvania County, Virginia, the son of Martin (1797-1849) and Nancy Pendleton Hicks. William’s mother died when he was three years old, and during his father’s long illness he helped manage the family farm. Always attracted to mechanical work, Hicks went to work after his father’s death as a quarryman and stonecutter in Louisa County, Virginia for two years, then turned to the carpenter’s and millwright’s trades. Although he had only a few years of formal education, he pursued a rigorous course of self-education in the mechanical arts and engineering. In 1852 Hicks was hired by Smith, Colby, and Company of New York to install machinery in the McCulloch Gold Mill near Greensboro, North Carolina. After two years in the Greensboro area he moved to Raleigh where, according to his contemporary, Samuel Ashe, Hicks was involved in constructing and equipping the Neuse Manufacturing Company’s paper mill, the large stone factory still standing at Falls of the Neuse. Hicks liked Raleigh and evidently made connections with substantial local citizens. He married Julia Louise Harrison, daughter of merchant John R. Harrison, settled down, and opened a contracting business.

During the Civil War, Hicks built and managed powder mills for the Confederacy near Raleigh. After the war, he entered the rosin business, then returned to contracting in association with Thomas H. Briggs, Sr. and James Dodd, leading Raleigh builders who had been active before the war. The firm constructed many buildings in the postwar boom.

In 1869, Hicks took on a newly established position as superintendent of construction and assistant architect of the Central Prison (State Penitentiary) in Raleigh, which had been authorized by the state legislature in 1868. The facility, completed in 1884, was a huge, brick edifice designed in castellated style by Ohio architect Levi T. Scofield. For a time the prisoners lived in log huts on the grounds of the prison, making bricks and laying the walls for their new quarters, which were nearing readiness for occupancy in 1882. Hicks managed the complex project effectively, and as the work proceeded he earned the approbation of various political leaders. In 1872, even after a change of political leadership, he was retained as “warden and architect” of the penitentiary and became de facto state architect. He was also accorded the title “Colonel.”

Under Hicks’s administration, the convict brick-making operation at the prison proved such an economic boon that several major state buildings of the 1880s were constructed with “penitentiary brick.” Among these were the Executive Mansion, the Supreme Court Building, and Holladay Hall (main building of present North Carolina State University, see Charles L. Carson), all in Raleigh, and Memorial Hall (1883-1885, see Samuel Sloan) in Chapel Hill. All were designed by noted architects of the day including Samuel Sloan, A. G. Bauer, and Charles L. Carson.

In addition, Hicks supplied penitentiary brick to some private customers including the Duke family’s tobacco warehouses in Durham. In October 1897, Hicks wrote a detailed letter to tobacconist Benjamin N. Duke estimating the quantity of brick needed for the Walker Tobacco Warehouse, the first of a series of large, brick warehouses in Durham and something of a prototype. Hicks may have taken a role in the design as well.

In 1883, Philadelphia architect Samuel Sloan had provided designs for the elaborate Queen Anne style Executive Mansion in Raleigh, but Sloan died in 1884, leaving the project in the hands of his young assistant A. G. Bauer. In order to save money, the state, as suggested by Governor Thomas Jarvis, contracted with Hicks as “Architect and Warden” of the prison. Hicks undertook to complete the building using prison labor and prison-made materials. Work on the prison and the mansion proceeded simultaneously. Hicks not only supplied convict bricks and labor but also, according to an 1887 account from Governor Thomas Jarvis, shaped the design. As early as 1883, Hicks and others had substantially amended Sloan’s original design for reasons of economy, which “much provoked” architect Sloan. Other alterations followed. Hicks substituted “penitentiary machine made pressed brick” trimmed in sandstone for Sloan’s extensive use of sandstone, and he altered the design toward symmetry and simplicity. Despite these economies, cost overruns and budge problems slowed the project. It was finally completed in 1891.

In the meantime, Hicks also supplied drawings to complete another Sloan project, the quickly built, impermanent complex for the 1884 State Exposition at the state fairgrounds. The following year, Hicks and Bauer shared the planning of the Supreme Court Building in a practical and subdued rendition of the Second Empire style. During the 1890s Hicks engaged in several projects, including work on the new campus of Trinity College (later Duke University), which moved to Durham from Randolph County. There, the large Main Building designed by architect Samuel Linton Leary was under construction by contractor C. H. Norton when the central tower collapsed. Hicks was called in to evaluate the collapse and was given the contract to rebuild and complete the project. A sketch of his life, published in 1898 by Trinity College, stated that “Colonel Hicks. . . superintended the construction of every brick building of Trinity College and Trinity Park School. . . . For this reason his venerated portrait now graces the wall of the college library.”

In 1894 Hicks invested in Separk, Hicks, and Company, a manufacturing concern, and in 1896 he was president of the North Carolina Building and Supply Company, which grew rapidly with a plant in Raleigh and a branch lumber mill at Troy by 1899. Among his associates in the firm who gained prominence were W. J. Ellington and C. P. Snuggs.

In 1898 Hicks retired from building and became superintendent of the Oxford Orphan Asylum, a Masonic charity. He was a Baptist, a Democrat, and an active Mason. Among his eight children, son W. B. Hicks became a manufacturer and John M. W. Hicks became treasurer of the American Tobacco Company. At Colonel Hicks’s death in 1911, he was widely eulogized for his excellent character as well as his accomplishments, and his funeral drew “an immense throng” to Raleigh’s Oakwood Cemetery.