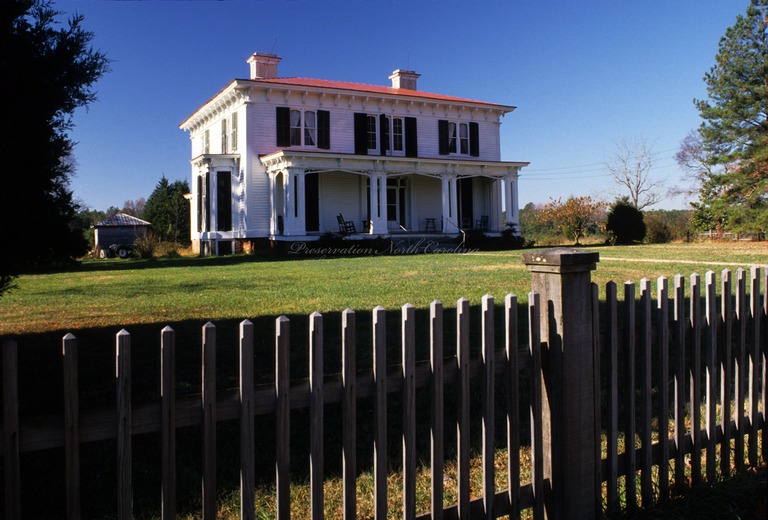 John A. Waddell (June 21, 1825-January 21, 1883), carpenter and contractor, spanned the transition in building from antebellum traditions to post-Civil War mass production. He began his career as a house carpenter associated with builder Jacob W. Holt in Warrenton, North Carolina, and after the Civil War he established the large contracting and manufacturing firm of Wilson and Waddell in Johnston County, catering to the postwar building boom in towns along the North Carolina Rail Road.

Little is known of Waddell’s early life. Born in Prince Edward County, Virginia, he evidently moved to Warrenton, North Carolina, in the 1840s with a group of artisans that included carpenter and builder Jacob W. Holt, who had one of the largest building workshops in antebellum North Carolina. He is probably the “John G. Waddle,” 24, of Virginia, listed among the seventeen free carpenters in Holt’s household in the 1850 census. Waddell worked on and even supervised construction of Greek Revival and Italianate style buildings in Holt’s distinctive idiom in Warrenton and Warren County and elsewhere. In the mid-1850s, Like most of Holt’s work, they show influences from various patternbooks, including Asher Benjamin’s Practical House Carpenter and especially William Ranlett’s The Architect. In the mid-1850s, Waddell went to Orange County, probably to supervise Holt’s contract for the Italianate style Mary Ann Southerland House in Chapel Hill. He met and married Susan Caroline Davis of Chapel Hill in 1854; they had a daughter in 1856 and returned to Warren County by 1857. Soon after his return, Waddell constructed two large plantation houses in southern Warren County in the eclectic Greek Revival-Italianate mode of the Holt shop: Buxton Place and Cherry Hill.

Family tradition and records describe Waddell’s role in building both Buxton Place and Cherry Hill and provide unusual personal insights into the clients’ side of the construction story. On May 7, 1857, Tempe Williams of Buxton Place wrote to her daughter, “Mr. Waddell has not yet commenced on the house,” but by May 21 she reported, “they have commenced the new house.” Buxton Place was completed for John Buxton Williams and Tempe Williams in 1858.

The example of Buxton Place inspired construction of Cherry Hill for the widow Marina Williams Alston on the neighboring plantation. In 1858 Marina, whose husband George W. Alston had died leaving her with three sons, decided to replace her small, old plantation house at Cherry Hill. She wrote to her niece on May 15, 1858, reporting that the Williamses had “moved into their new place. . . . They have a splendid building.” She continued, “But what will surprise you most will be to hear that your Aunt Marina has one on hand. The Carpenter says he will have it done by Christmas. . . . I wish you were here to help me arrange my yard & garden. I have no trouble about it. The Carpenter finds everything.” The “carpenter” was John A. Waddell. Disbursements from the George W. Alston estate (administered by John Buxton Williams until the sons attained adulthood) include payments to Waddell for $4,774.69 on January 1, 1859, and $3,029.19 on January 1, 1860. In stories handed down in the family, the Alston children remembered Waddell as a kind and fatherly man who paid attention to the fatherless boys, allowed them to play on the girders of the unfinished house, and gave George, Jr., his first pocket knife. An unsigned, undated “bill” (estimate) for a house for P. G. Alston, with many elements to be similar to J. B. Williams’s house, probably reflects a conversation between Philip G. Alston (Marina and George’s eldest son), and Waddell. It remains unclear as to whether for these projects Waddell was still working in association with Holt—as seems most likely—or entirely on his own. At this time Waddell also had a tinning operation in Warrenton and by 1860 had $2,000 in real estate and $5,000 in personal property.

During and after the Civil War, Waddell changed with the times. Accustomed to building for the planter elite, he adapted quickly to working for new industrialists and townspeople and to manufacturing building materials through steam-powered mass production. By 1863, he formed a partnership with Warren County builder and steam sawmill operator John M. Wilson. After the war, the two men settled in Johnston County, where they established a steam-powered sawmill around which the town of Wilson’s Mills developed. They bought hundreds of acres of timber land near the North Carolina Rail Road and formed the Wilson Lumber Company, a sash and blind manufactory, and the contracting firm of Wilson and Waddell. Because they were located on the railroad, they could readily supply building projects along its route, including Raleigh and points west.

In 1869 Wilson and Waddell contracted to build the Heck-Andrews House, one of the first major houses in Raleigh after the Civil War. It was designed by architect George S. H. Appleget in the “French” or Second Empire style, 2 1/2 stories high with a tall front tower and ornate millwork; the contract and specifications, probably prepared by Appleget, survive in the Jonathan Heck Papers. The contractors produced the building materials at their Johnston County location, then shipped them to Raleigh to build the imposing house. Certain details of the millwork at this house recur in other Raleigh buildings, suggesting the firm’s role as suppliers and possibly builders.

Wilson and Waddell also constructed and supplied materials for many other buildings in the postwar construction boom, sending materials by rail to such places as Durham, Haw River, and Morehead City. They were poised and ready to build quickly for the industrialists then striving to remake the economy and build up the towns. The October 6, 1875, Raleigh Daily Sentinel reported, “The well-known building firm of Wilson & Waddell, who put up Col. Heck’s elegant residence in this city, are extensively engaged in adding to the improvements of this part of the state. They are now building a cotton factory on Haw river, in Alamance county, which is to be three stories high, 200 feet long, and 50 feet wide; an addition to Bingham’s school edifice, at Mebanesville, 80 feet by 36; and a large hotel and handsome residence for W. T. Blackwell, at Durham.” (The mill on the Haw was probably a Holt family project; the reference raises the possibility that the firm might have built other factories and possibly residences for the Holts and others in Alamance County.) Durham’s Tobacco Plant of March 8, 1876, reported that local planing mills could not “supply anything like all the dress lumber that is used. A great deal of lumber used here is dressed at Wilson’s Mills.” Wilson and Waddell sometimes built from architects’ designs but also developed their own designs, which featured millwork akin to the Heck-Andrews House and bracketed, cross-gabled roofs. The partnership was dissolved in April, 1882, and Waddell died the following January. His children included Gertrude (who married John A. Mitchener, a leading citizen in Selma), Charles, Rosa, Annie, John, and Maggie. His widow, Susan, ran the sawmill for a few years, and his son Charles continued in the business.