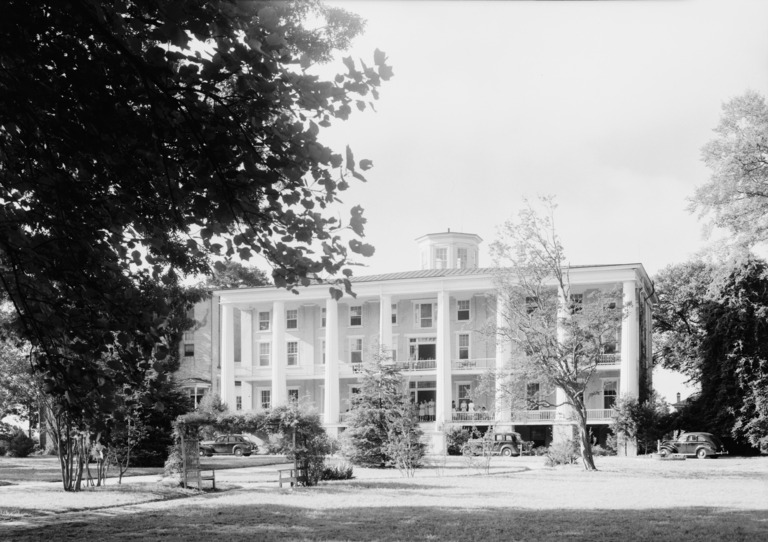 Albert Gamaliel Jones (1812-ca. 1880), a house carpenter from Warren County, built distinctive Greek Revival houses and college buildings during the flush years of the 1840s and 1850s in several Piedmont and eastern North Carolina counties. Although his parents and early life have not been ascertained, he was probably born in Judkins township in Warren County. In 1832 he married Elizabeth Harriet Harris and in 1841 he bought land near the village of Embro (Jones’s Crossroads). Here he built a large frame house that survived until the 1950s, and his 1-room frame office remains on the Wagner farm. Albert Gamaliel and Elizabeth Jones had seven children, of whom William Z. Y. Jones (born about 1835) and John Thomas Jones (1849-1923) followed their father’s trade as builders.

By the 1840s, Albert G. Jones (who typically signed his name as “A. G. Jones”) was among leading builders in Warren County, where the combination of the Raleigh and Gaston Railroad and tobacco plantation wealth generated a demand for building. Jones’s documented works share some features with other Warren County builders, but no records shed light on these men’s relationships. Such carpentry details as a spool-like turned molding on pilasters and entrances suggest possible early training or work with Thomas Bragg, Sr. or James Burgess. In the 1840s and 1850s Jones used Greek Revival mantels and other features in common with builder Jacob W. Holt, who arrived in Warrenton in the mid-1840s, but their connection is likewise unknown. In his documented houses such as the Cushing Biggs Hassell House (1847-1848) in Williamston and Lake o’ the Woods (1852-1853) in Warren County, Jones displayed hallmarks of the Greek Revival mode that suggest other work as his: these symmetrical, 2-story frame houses are distinguished by oversize bull’s-eye cornerblocks at doors and windows, frequent use of triple windows and geometric tracery in transoms and sidelights, heavy mantels with stout fluted columns from Asher Benjamin’s designs, and his favored spool-turned molding.

Although he built many houses in Warren County, from the 1840s Jones also took contracts elsewhere, beginning with the house he built for merchant Cushing Biggs Hassell in Williamston. Hassell noted in his diary every step of construction. Jones arrived on January 31, 1847, and attended preaching with Hassell, then “commenced laying off the framing” on February 1, raised the frame on March 31 and April 1, with between fifteen and twenty hands, and later installed sash and blinds from New York. The house was completed in 1848, with masonry by G. A. Ellington and John Rodgers the painter.

Also in Williamston, Jones contracted to build the Williamston Female Institute (1851-1852), one of the first of a series of major school buildings in an era of rapid college development. In Murfreesboro, Jones undertook in the early 1850s the large, brick main buildings for Chowan College (The Columns) and the Wesleyan Female College, as his name on both their cornerstones recalled. These were Greek Revival edifices with massive porticoes. He also built houses for T. N. Myrick (a member of the Wesleyan College building committee) and other Murfreesboro residents. In Louisburg he contracted for the main building for Louisburg College and a number of residences.

For these big projects, Jones became indebted to various creditors and sureties. When the trustees of Chowan College failed to pay him after the building was finished, in 1855-1856 Jones had to mortgage, then sell much of his property and take the oath “for the relief of insolvent debtors.” He wrote to client Ellis Malone in Louisburg in 1855 that he could not finish building his house, “a source of great mortification to me.” Builder Thomas Raney completed the job. Around 1860 Jones moved to Greene County where his son William Z. Y. Jones was living. By 1870 he was back in Warren County, listed as a farmer, and in 1880 he was listed there as a house carpenter, head of a household that included his son John T. and family. Through his son, John Thomas, Jones left numerous descendants in the county.