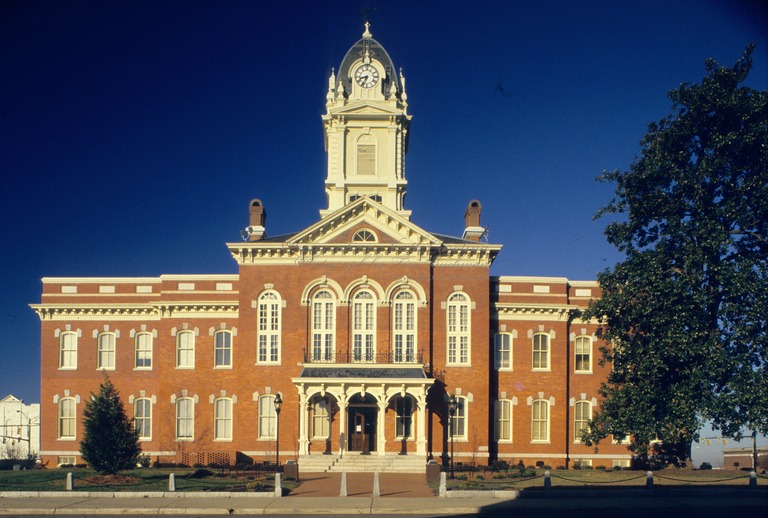 Thomas J. Holt (ca. 1814-1890), brother of contractor Jacob W. Holt, began his career as a carpenter but assumed the role and title of architect and worked in the North Carolina Piedmont for many years. He was born in Prince Edward County, Virginia, the second son of carpenter David Holt and Elizabeth McGehee Holt. After Thomas and his elder brother, Jacob W. Holt, lost their mother in 1821, they were entrusted to the care of a maternal uncle and probably apprenticed to a local carpenter. By 1849 Thomas joined his brother, Jacob, in Warrenton, North Carolina as did other Prince Edward County building artisans. Jacob Holt’s carpentry and building shop was among the largest in the state. In 1850 Thomas J. Holt’s household was next to his brother’s, and included his wife Rebecca, three children (Indiana, Henry, and Jacob), and carpenters Samuel Rogers (43) and William Phillips (23). The Holt brothers worked together for a time. In some cases, Jacob took on building contracts which Thomas then superintended, including a job for General M. T. Hawkins in 1850. At the large St. John’s College (1855-1857) in Oxford, Jacob Holt contracted for the carpentry and John Berry of Hillsborough contracted for the masonry work; Thomas received payments regularly for the Holt portion of the work and probably superintended. An open question is what role Thomas took in developing the Holt firm’s designs from pattern books, and how much of the Holt style was Thomas’s versus that of his more famous brother Jacob.

In the late 1850s Thomas J. Holt moved to Raleigh, where he became “architect” for the Raleigh and Gaston Railroad; the company’s president was William J. Hawkins of Warren County. By 1860 in Raleigh Thomas identified himself as an architect, and he had remarried (Ellenora or Nora) and had more children (Estelle and Gaston). Thomas planned buildings for the railroad company and advertised for contractors to construct them at locations all along the line at Henderson, Franklinton, and Kittrell and possibly at Warren Plains and others. His largest project was the massive Raleigh and Gaston Railroad Repair Shops (1850s) in Raleigh, an extensive complex of brick buildings; the Raleigh newspaper praised the building and the “taste and skill” of Holt, the “Architect and Superintendent of the work.” Although that building was razed in the mid-20th century, for many years the cornerstone marked with Holt’s name remained. It is not known whether he also designed the Raleigh and Gaston’s brick office building nearby, later known as the Seaboard Office Building.

Also in Raleigh, Thomas Holt became the architect for the Peace College Main Building on the eve of the Civil War; he simplified the design from that supplied by architect William Percival. His brother Jacob took the contract to build it. But the war delayed its completion; it was roughly finished for service as a hospital and only later fully completed for college use. In 1860 Thomas J. Holt won first prize for architectural drawing at the State Fair, a prize won the previous year by William Percival. None of his drawings are known to survive.

After the Civil War, Thomas and his family moved frequently. In 1869 a T. J. Holt advertised a carpentry business in Charlotte with “Architecture and building . . . in the latest style.” The 1870 census shows that he, like his brother, moved to Mecklenburg County, Virginia, where building was active, and there he was listed as an architect with Nora and the children; in 1880 he was in Oxford, North Carolina, working as a house carpenter. During the 1880s he lived in Raleigh’s Oakwood neighborhood, where he probably had a role in building some of the houses, though none has been documented. The same decade brought a major project many miles to the west in Monroe, where county records document that he served as superintending architect of the Union County Courthouse (1887-1888) in Monroe, a substantial brick edifice in Second Empire style. According to an article in the Fayetteville Weekly Observer of April 20, 1893, it was designed by Bruce and Morgan, leading Atlanta architects.