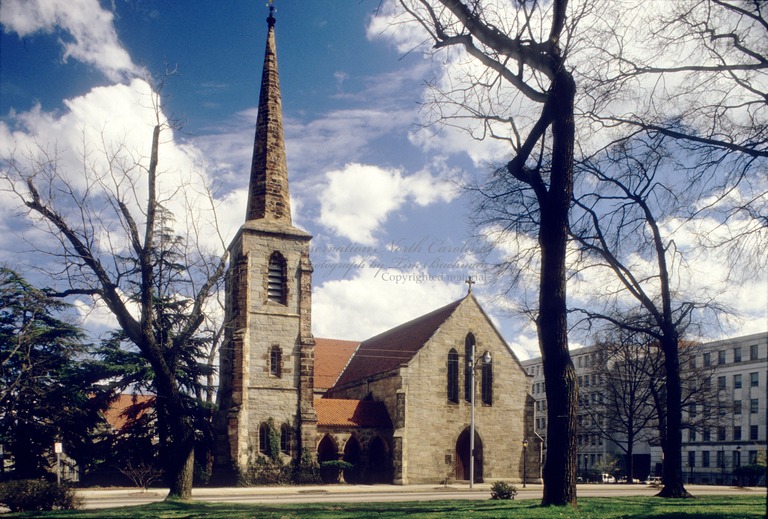 Robert Findlater (ca. 1808-July 9, 1856), a native of Aberdeen, Scotland, emigrated directly to the United States in the early 1830s and worked on two major projects in Raleigh: the North Carolina State Capitol and Christ Episcopal Church.

By December 1834 Findlater was one of several Scots stonecutters involved in construction of the North Carolina State Capitol, earning $1.75 per day and working under the superintendence of fellow Scotsman David Paton. He applied to the Wake County Court in August 1835 for United States citizenship, which was granted two years later. Like several other artisans who came to work on the capitol, Findlater decided to remain in Raleigh.

In his only other known building project in the state, Findlater joined with fellow capitol stonecutter James Puttick in constructing the stone walls of Raleigh’s Christ Episcopal Church. These two, plus carpenter Justin Martindale contracted to “build the walls and complete the roof of” the Gothic Revival style church designed by architect Richard Upjohn. The contract specified that the walls were to be “built of good durable stone & strong lime, the work to be done in a workmanlike manner of rubble & cut stone and to conform in every particular to the plan and specifications furnished by Richard Upjohn of the city of New York. . . the whole of said work to be completed within twenty-seven months from the date of this agreement.” A separate agreement would have been given for finishing the interior of the church, including the interior framing, lathing, and plastering over the stone walls and other elements. The church was completed in 1853 and consecrated early the next year. The bell tower, which was also part of Upjohn’s original design, was constructed a short time later. The proximity of Christ Church to the State Capitol just across Wilmington Street highlights the versatility of stonecutters such as Puttick and Findlater: in contrast to the crisp, precise stonework of the Capitol, Christ Church displays the rougher “rubble” stonework intended by Upjohn to evoke English country churches.

In addition to these two major projects, Findlater engaged in other businesses. As advertised in the Raleigh Register over the years, these included the firm of Findlater and [Matthew] Boyd, apparently a restaurant-bar and catering service in the late 1840s; a restaurant, grocer, and billiard room with Robert Miller in 1840-1841; and a grocery business on his own, begun in 1841. In 1851 the Wake County Court paid Findlater $71.42 for digging a well on the “Court Square.” Meanwhile, in 1843 and 1845 he ran unsuccessfully for election as a Raleigh City Commissioner.

In the 1840s, according to Wake County tax lists, Findlater owned the lot at the northeast corner of the intersection of Fayetteville Street and Martin Street, earlier the site of artist Jacob Marling’s “North Carolina Museum.” During the last year of his life, he was involved as defendant in two law suits, the second involving financial difficulties. For a time he owned a rock quarry on Beaver Dam Creek.

On May 11, 1841 in Fayetteville Findlater married Sarah Ann Lumsden (ca. 1821-1851), daughter of Joshua E. Lumsden of Raleigh. They had one child, John H. (b. ca. 1847). After his mother and father died in 1851 and 1856, respectively, in 1847 young John went to live with his mother’s relatives in Cumberland County. In 1872 he married Annie E. Lumsden, daughter of Grace and William McKay Lumsden. John H. apparently spelled his name Finlator, as have succeeding generations. Among the descendants of stonecutter Robert Findlater was his great-grandson, the Reverend William Wallace Finlator, pastor of Pullen Memorial Baptist Church in Raleigh from 1956 to 1982 and a prominent advocate for social justice.