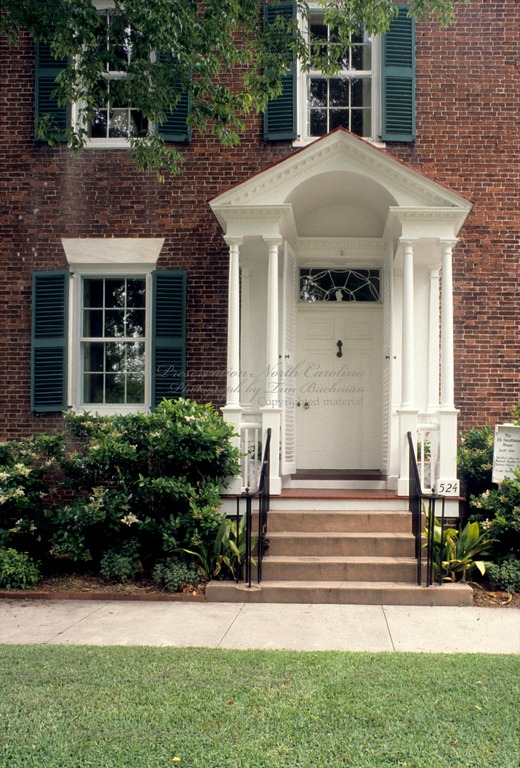 Asa King (ca. 1782-1843) was a highly skilled house carpenter who executed unusually fine Federal period woodwork in some of New Bern’s most outstanding buildings. New Bern, the state’s largest and most elegant city in this period, presents the state’s premier assemblage of urban Federal style architecture, much of which shares similar forms, workmanship, and design details. Firm attribution of three key buildings to King suggests that he also took a larger role in creating in the city’s legacy.

Nothing is known of Asa King’s origins or early life, whether he was a native of the city, or where he might have lived or worked before coming to New Bern. The name is a common one in New England. The principal information on King’s work comes from a letter in the Cameron Family Papers. After New Bern’s economic and architectural prime had passed, John M. Roberts of New Bern wrote to Duncan Cameron, the banker and planter, on February 20, 1833, “The services of Mr. Asa King are offered to Superintend your building at Hillsborough at $30 a month to Commence on the day he leaves Newbern and terminate when he is discharged, and his expenses to be paid, Stage fare &C and his board found.” Roberts testified that “Mr. King is a Superior workman having built Mr. Smallwoods, Judge Donnell & Several other Houses and the State Bank in this place—and is a very pleasant man when sober.”

Roberts’s letter identified King as the builder of three of New Bern’s most significant Federal period edifices—the Eli Smallwood House, the John R. Donnell House, and the State Bank of New Bern. All were brick buildings with elaborate and delicate Federal style woodwork characteristic of other local structures, and both houses followed the side-passage plan typical of Federal period New Bern.

Still standing as an example of King’s “superior” workmanship, the Eli Smallwood House (probably built in the 1810s) is one of the finest Federal style residences in the state. Akin to the Donnell House, it features a wealth of intricately wrought woodwork, from the Palladian motif entrance portico adorned with modillions and tiny cable moldings, to the upper-story drawing room with its array of pedimented overmantels and window openings, enriched modillion cornices, and carved wainscot and baseboards.

For the Donnell House, records kept by Judge John Donnell list frequent payments to Asa King between March 1817 and December 1818. Donnell paid King sometimes in cash in amounts as large as $500, and sometimes in kind, such as a payment “in pork” for $21.36 for “work on my Brick House, Office, &c.” For Donnell’s house, King produced a full ensemble of Federal style woodwork similar to that at the Smallwood House. Donnell also paid other established local artisans for their work in other trades, including Joshua Mitchell for bricklaying, Bennett Flanner for plastering, and others. Although the Donnell House has been lost, it was recorded in photographs, and its original companion law office survives at a suburban location. The State Bank, seen in a ca. 1863 photograph, was a large brick building with restrained Federal details including pedimented entrances enriched with sunbursts.

Strong similarities with the work at the Smallwood and Donnell houses have led Peter Sandbeck to attribute other work to King’s hand, including the Jones-Jarvis House next door to the Smallwood House, and the woodwork of the lodge room of the somewhat earlier St. John’s Masonic Lodge, the latter generally credited to John Dewey.

Even the highly skilled Asa King faced hard times when New Bern’s economic status declined in the late 1820s and, especially, the 1830s. He was still getting enough work in 1829 to employ an apprentice, taking John Lewis, aged fifteen, to the carpenter’s trade. It was in 1833 that he obtained John Roberts’s recommendation to Duncan Cameron to employ him, and the rate he quoted, a dollar a day, reflected the times.

Roberts’s letter continued with further information about King. Besides being a superior workman, he said, King had “for Some time past been very intemperate, it is probable that under your direction he might entirely reform. (Duncan Cameron was a strict manager and a man of strong character). If he would keep sober I know of no Man in the State that would serve you better.”“He will be unencumbered with a family as his only daughter is married and his wife will remain at Beaufort”—suggesting some work by King in that community. “ He noted that earlier , “Mr. King had been employed by “Mr. Ferrand at Swansboro.” Supplying a link between New Bern artisans, Roberts remarked to Cameron, “Mr. Deweys Jack now in your employ worked a Considerable time with Mr. King.” This was Jack Dewey, the highly regarded enslaved carpenter who had traveled from New Bern to work for Cameron, and who was owned by Charles Dewey, son and heir of the New Bern carpenter John Dewey. In working with Asa King, Jack Dewey would have been involved in some of the city’s finest early 19th century buildings, gaining experience that made him a highly qualified artisan.

Asa King did go to Hillsborough, and presumably fared well under Cameron’s eye: a receipt of March 20, 1833, from Duncan Cameron, reflected paying King for 87 days work at $30 per month, as well as the stage fare ($9.50) from New Bern to Hillsborough, and freight for shipping his (tool) chest at $2.50. It is an indication of the relative value of a day’s work and transportation that it cost 2 1/2 days’ pay to ship a tool chest from New Bern to Hillsborough. What King built in Hillsborough in 1833 is not known, though the Roberts letter is marked in another (later?) hand, “Hillsboro Acad.” King also found work in Raleigh, where he worked as a carpenter in constructing the North Carolina State Capitol during July through October, 1833.

Along with other North Carolina artisans, Asa King decided to leave the state in hopes of finding better opportunities. On April 26, 1843, the Wilmington, North Carolina, Weekly Chronicle reported the death of Asa King on April 16, in Greensboro, Alabama, at the age of 61 years. When King left for Alabama, and what he might have built there, remain open questions.