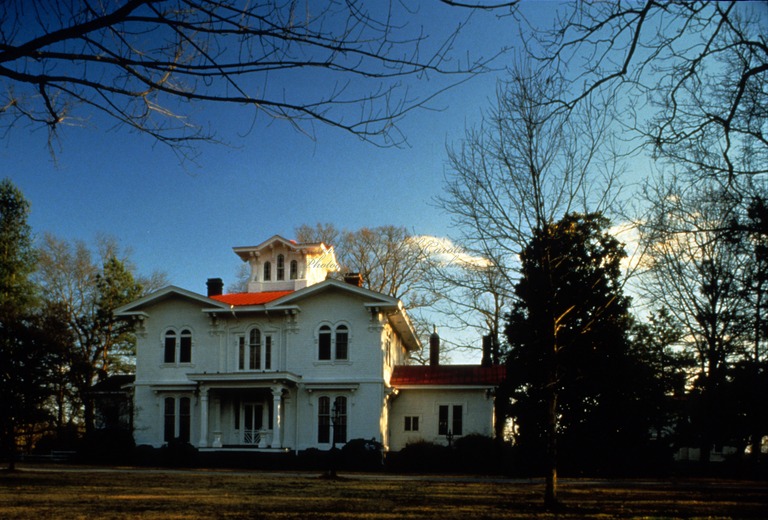 Edmund George Lind (1829-1909), architect, was born in England and educated at the School of Design in London. He immigrated to America in 1855 and settled in Baltimore where he established an important practice that encompassed several projects in North Carolina. The best known of his works in the state, and one of the most intact of his projects anywhere, is the Italianate villa style Coolmore Plantation complex near Tarboro.

After arriving in Baltimore in 1855, Lind worked briefly with architect Nathan G. Starkweather and had a short partnership (1856-1860) with William T. Murdoch before establishing his own practice. A charter member of the American Institute of Architects (1857), Lind served as its vice president in 1872 and 1876. Among his best known works in Baltimore is the Peabody Library (1861, 1878). As his long list of projects records, he designed buildings in Virginia, Georgia, Tennessee, North Carolina, and elsewhere. He was architect in the Treasury Department during Ulysses S. Grant’s administration. His work encompassed a full range of styles, including the Greek Revival, Italianate, and Gothic Revival modes. At a time of frequent trade with Baltimore, several eastern North Carolina residents turned to Lind for architectural designs. He gave them fashionable buildings emblematic of progress, prosperity, and participation in the national mainstream of business and architecture.

Lind’s first client in North Carolina was evidently Dr. Joseph J. Powell, an Edgecombe County planter and physician who frequently visited Baltimore. In 1858 he employed Lind and Murdoch to plan his Italianate villa, Coolmore (1858-1861) near Tarboro. Powell’s correspondence with Lind recorded the architect’s visits to Tarboro and his role in securing Baltimore materials and artisans. Lind recruited Baltimore builder E. A. Sherman to construct the house, and “fresco painter” Ernst Dreyer—an immigrant from Prussia who had worked in St. Petersburg—to paint the glorious trompe l’oeil interiors, which survive as probably the most complete examples of Dreyer’s work remaining. The construction cost in Lind’s accounts was $20,000. Lind also ordered Powell’s furniture, draperies, art work, and even china and silver from Baltimore.

During North Carolina’s flurry of prosperity before the Civil War, Lind also attracted other commissions in Tarboro and nearby Wilson that modeled the picturesque cottage and bracketed villa styles. In Tarboro, he planned a schoolhouse and two stores (1858), both built by E. A. Sherman, and a “Cottage Residence” for one D. Pender (which is probably the Greek Revival house with sawnwork porch on North Main Street) and remodeled or built other houses. For the young town of Wilson, seat of a county recently formed from Edgecombe County, Lind designed the large and eclectic Wilson Female Seminary, two churches, and some houses. He provided plans for the Pitt County Courthouse in Greenville and corresponded with Northampton County planter H. K. Burgwyn about planning a house in 1860, which was probably precluded by war.

In 1859 builder Sherman moved to Wilson, where he advertised that, with eighteen years’ experience, and “assisted by Mr. E. G. Lind of Baltimore, an accomplished and thorough architect, he considers himself competent to meet all the demands of the public.” Lind’s popularity in North Carolina was renewed after the Civil War, as leaders striving to rebuild the state turned to familiar antebellum architects including Lind, David Paton and Samuel Sloan. Lind visited Raleigh to plan a $50,000 Masonic Temple and a Governor’s Mansion, but because of financial difficulties neither was built. In Wilson in the early 1870s, Lind designed a bank, the $15,000 Briggs Hotel and some residences, which were evidently built. Although Lind practiced for many more years, including a prolific period (1882-1893) as a “New South” architect headquartered in Atlanta, no other North Carolina works are known.