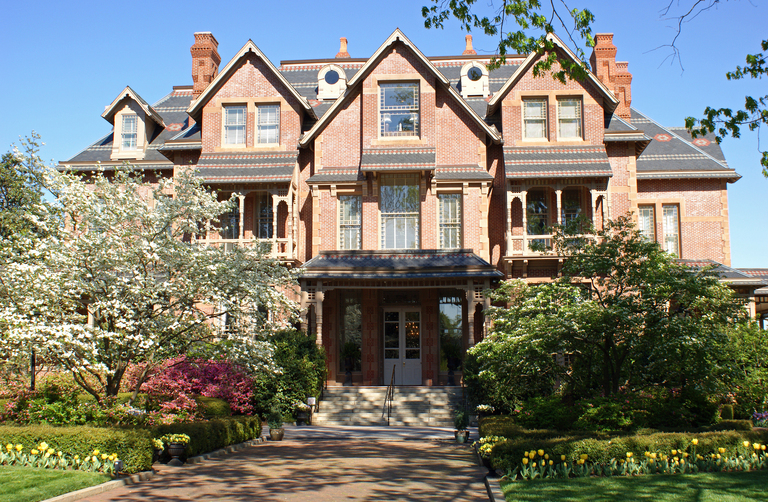 Samuel Sloan (March 7, 1815-July 19, 1884), a prolific and influential Philadelphia architect, designed several important buildings in North Carolina, including some of the largest state-sponsored projects in the post-Civil War period. One of the very few nationally important architects who worked in North Carolina in the immediate postwar years, he took on projects and clients that were successors to those associated with New York architect Alexander Jackson Davis in the antebellum period.

Like many 19th century architects, Sloan began his career as a builder. Born in Beaver Dam, Pennsylvania, he obtained a basic education in Lancaster, Pennsylvania and in 1830 was apprenticed to a carpenter and cabinetmaker. According to his biographer, Harold N. Cooledge, Sloan moved to Philadelphia about 1833 to work as a carpenter and builder. As he gained experience, he progressed through the ranks of the building trades and began to identify himself as an architect by 1850. He maintained his practical bent, however, reflecting his early years as an artisan. In the 1840s, Sloan made the acquaintance of Dr. Thomas S. Kirkbride, one of America’s foremost authorities on the treatment of the mentally ill and the functional operation of mental hospitals. The two men became friends and associates, and Sloan took a role in translating the doctor’s theories of patient care into the “Kirkbride System,” an architectural program that became the model for 19th century mental hospital design in the United States.

Gaining a national reputation as one of Philadelphia’s premier architects, Sloan became one of the most prolific architects of his generation. He planned a remarkable number of residences, churches, commercial buildings, schools, and hospitals. He also had a broad influence through his popular publications on architecture and building. He produced such pattern books as The Model Architect (1852-1853 and subsequent editions) and City and Suburban Architecture (1857-1858), and he was the pioneering editor and publisher of The Architectural Review and American Builder’s Journal (1868-1870), described as the first American periodical devoted exclusively to architecture.

Despite his prominence, however, Sloan’s Philadelphia practice suffered a downturn before the Civil War, from which he never recovered fully. Like many architects and builders, he lost business because of the Panic of 1857 and during the hiatus of construction during the war. These problems, coupled with a political scandal about the Philadelphia City Hall competition (1860) and changing tastes and political situations, diminished his patronage in Philadelphia. His most important post-Civil War work was outside of Philadelphia, especially in North Carolina, where he had worked in the late antebellum years.

Sloan’s first major buildings in North Carolina were two imposing churches built in Wilmington on the eve of the Civil War. After the city’s Presbyterian church of 1821 was destroyed by fire in 1859, its congregation commissioned Sloan to plan the new First Presbyterian Church on a newly acquired and prominent site on South Third Street. In the same year, the city’s Baptists also commissioned Sloan to design their large Gothic Revival edifice, First Baptist Church at a prestigious corner on Market Street. To supervise the Baptist church project, Sloan sent to Wilmington his young associate, Addison Hutton, whom he had recently hired as a draftsman and with whom he would later form a partnership. The Presbyterian church was finished in 1861. Work on the Baptist church began in 1859 but was not complete when the church was boarded up in the summer of 1861 because of the war. The massive brick building with its 197-foot spire was finally finished in 1870. For many years its tower was the tallest feature in the city’s skyline.

Sloan’s architectural books also gained an audience in antebellum North Carolina, especially The Model Architect (1852-1853 and subsequent editions). In Greensboro, for example, Dunleith (1856), built for Judge Robert P. Dick as a villa with central tower and front-facing gabled wings, strongly resembles an Italian villa (Design 1) in The Model Architect. It was probably erected by architect-builder W. S. Andrews, who specialized in villas and cottages and cited Judge Dick among his references in 1858. In New Bern, the Green-Guion House (1855-1860) was almost a replica of an “Italian Residence” (Plate 29) in The Model Architect. In Warrenton, local builder Jacob W. Holt adapted a design for “A Village Church” (Design 19) from the same book in remodeling Emmanuel Episcopal Church (1854-1858), and he incorporated features from that book in other buildings as well. Although it is possible that Sloan himself took a hand in one or more of these projects, there is no documentation of his role, and it is most likely that they were copied or adapted from his books.

After the Civil War, although Sloan’s practice in Philadelphia diminished, with Kirkbride’s help he continued to enjoy national prestige as an architect of hospitals. He looked to the South for commissions, especially in areas where he had worked previously. As Wilmington’s economy recovered from the war, Sloan won a major commission in the city, for the Bank of New Hanover (1873). He planned the elaborate 3-story brick bank and office building in a locally novel blend of Gothic and Second Empire styles. The local Morning Herald praised the plans in January, 1873, and predicted the bank would be “the handsomest building in Wilmington, if not the entire state.” Also in Wilmington, Sloan may have designed the Temple of Israel (1875-1876) for the oldest Jewish congregation in the state, employing a Moorish theme considered suitable to its purpose.

In the 1870s, North Carolina began to invest in important new facilities. Sloan took on a number of these projects, which brought him substantial new jobs and also headaches due to erratic funding. The most pressing need—intensified, some said, by the traumas of the war and its aftermath—was for new and larger hospitals for the insane. The state’s antebellum asylum, North Carolina Hospital for the Insane (planned by Alexander Jackson Davis also with advice from Thomas Kirkbride), was woefully inadequate during the early postwar period. In 1875 the General Assembly enacted legislation to enlarge the state mental health system, instructing the building committee to confer with national experts on the choice of an architect. The committee visited Kirkbride, who recommended Sloan. He won the plum commission to plan the Western North Carolina Hospital for the Insane, (1875-1883; 1886; 1890s), a huge facility near Morganton to serve patients from the western region.

The complex was located on a rural hilltop site then three miles from Morganton. Like other such facilities of its era, the site was suitably prominent and convenient to the railroad (the Western North Carolina Railroad, which had recently reached Morganton), while also lying beyond the town on land with a restorative natural setting and the potential for farming. Enriched with architectural elements including Gothic Revival, classical, and Second Empire features, the vast hospital followed an extended E-shaped plan that embodied the Kirkbride functional model. The central administrative core was planned for the superintendent’s quarters and clerical offices, and it was flanked by pavilions and connectors for separate male and female wards, infirmaries, and dining halls. The contract was let in 1875 to established Wilmington contractor James Walker, the builder of Sloan’s Presbyterian church in Wilmington. Money problems delayed completion. Construction was stopped in 1883 with only the central section and one wing completed, and the building filled up immediately. The north wing was built in 1886, and an annex was added a few years later. During its long period of construction, Sloan frequently visited Morganton to inspect the work and consult with Walker on its progress.

With his imposing hospital rising near Morganton, Sloan attracted the attention of Governor Thomas J. Jarvis, and soon had the commission to plan the Executive Mansion in Raleigh. Other commissions soon followed, including the State Exposition Buildings, a large, prefabricated complex in Raleigh, which was built in a matter of months in 1884. The Executive Mansion took much longer.

For the Executive Mansion, in 1883, after long lobbying, the legislature authorized construction, directing that the governor economize by using convict labor from the State Penitentiary as well as brick manufactured at that facility. Sloan arrived in Raleigh in the spring of 1883 with plans for a sandstone and brick edifice described by local newspapers as “artistic,” “ornate,” and “modern.” Seeking further economies, the state contracted for construction with the architect and superintendent of the prison, William J. Hicks, who simplified the design; he also revised the specifications to use primarily pressed brick from the penitentiary factory, only accented with sandstone trim. Cost overruns still ensued, the legislature cut off funding, and construction stopped in 1887. In 1889, however, work began again, and in January, 1891, the mansion was ready for occupancy and received praise for its beauty and convenience and as a “source of pride to every North Carolinian.” Generally symmetrical in form, the mansion combines elements of the Queen Anne, Eastlake, and picturesque cottage styles, giving it a domestic demeanor despite its large mass; the interior features a broad central hallway and is finished with North Carolina woods.

Besides these state government jobs, other projects also came Sloan’s way. Having moved to North Carolina, he was among the preeminent architects residing in the state. For Memorial Hall (1883-1885), the first substantial building at the University of North Carolina after the Civil War, Sloan planned a boldly eclectic hall with an unusual structure of immense wooden arches allowing for an open space to seat 4,000 people. Much admired for a time, in the 20th century the auditorium was castigated as a “monstrosity” and razed. In New Bern, where the old courthouse had burned in 1861, commissioners selected Sloan and his partner Charles Balderston to design their Second Empire style Craven County Courthouse (1882-1884)—the grandest edifice in town since the war—as well as a new jail; both were constructed by local builder John B. Lane. Sloan also gained commissions to design schools in Raleigh and New Bern; a bank for E. B. Borden in Goldsboro; and improvements (as yet undefined) at Peace College and St. Augustine’s College in Raleigh. His buildings encompassed Italianate, Queen Anne, Gothic Revival, and other popular styles. For much of his North Carolina work, Sloan relied heavily on his assistant, A. G. Bauer for drafting and other tasks. As the workhorse of the firm in 1883, Bauer evidently completed all the drawings for the Executive Mansion in Raleigh, Memorial Hall in Chapel Hill, and possibly others.

In July, 1884, Sloan died suddenly as a result of sunstroke, leaving several public and private commissions under construction. These included the Centennial School and St. Mary’s School in Raleigh, the New Bern Graded School, Memorial Hall in Chapel Hill, and others. Bauer continued the firm’s business, and persuaded most of the clients (except E. B. Borden) to allow him to complete the commissions. Bauer also served as consultant to William J. Hicks, who managed construction of the Executive Mansion. In addition, Bauer carried out Sloan’s commissions for the Centennial School and improvements to the National Hotel in Raleigh.

Although Sloan died with several of his major North Carolina works still under construction, he left his mark in the state, providing designs for substantial, modern buildings central to the state’s post-Civil War recovery and its determination to move forward.