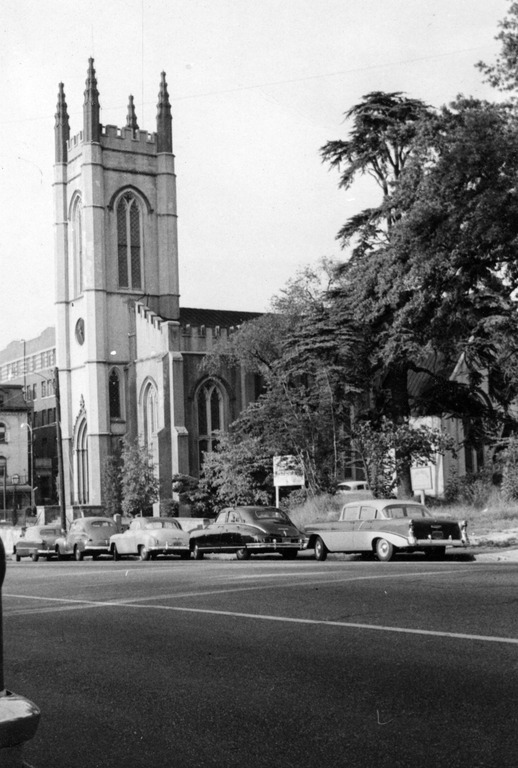 John S. Norris (1804-July 25, 1876), builder and architect, was born and worked in New York City, but his best known works are his public and private buildings in Wilmington, North Carolina, and Savannah, Georgia, which encompassed Greek Revival, Gothic Revival, and Italianate styles. Typical of his generation, he began his career as a brickmason, then progressed to builder and “architect.” Norris was first listed as “architect” in the 1847 New York City directory, but his works in the city have yet to be identified. Despite his extensive work in the South, he maintained his connection with New York throughout his career. His extensive and important work in Savannah is documented in Mary Lane Morrison’s John S. Norris, Architect in Savannah (1960).

Norris came to Wilmington in 1839 to superintend the construction of St. James Episcopal Church, a Gothic Revival style building of stuccoed brick designed by Philadelphia architect Thomas U. Walter. Completed in 1840, the church was one of the first in Wilmington designed by a distant urban architect. It also began a local pattern of clients hiring superintending architects familiar with urban construction and design to execute such architects’ plans, which often challenged local artisans. The cornerstone for the $12,000 building was laid on April 3, 1839. Norris selected and purchased materials and oversaw the work of the chief brickmason, John C. Wood (see Wood Brothers), and chief carpenter Christopher Dall, along with many other free and enslaved workmen. With the approval of the vestry Norris also selected the church fixtures. Dall had come from New York to Wilmington to work on the church, and Wood and his brother Robert B. Wood had come from Nantucket. All three artisans stayed in the city. Norris evidently pleased Wilmingtonians and attracted additional commissions.

After a major downtown fire on January 17, 1840, he was employed by the directors of the Bank of Cape Fear to remodel their fire-damaged building. He produced a stuccoed brick building that is believed to have been the first use of the bracketed Italianate style in the city, as well as an early use of an ornate cast-iron porch with canopy roof. So satisfied were the bank directors that they presented Norris with a silver pitcher in appreciation for his work. After completing the Bank of Cape Fear, Norris returned to New York. Soon afterward, in 1843, leading Wilmingtonians wrote to him urging him to seek the federal appointment to build the city’s United States Custom House. Six men signed a letter commending the “taste and durability displayed in the buildings public and private” he had superintended —suggesting that he had done additional work in town. With the support of the Wilmington collector of customs, Norris received the job as architect to plan and superintend construction of Wilmington’s Custom House. He was chosen over two other candidates, George Hodges of Fayetteville and the famous South Carolina architect Robert Mills.

Work began on Wilmington’s Custom House on May 24, 1843. Over the long period of construction—as documented by records in the National Archives—Norris faced various problems, including departure of northern workers during the hot summers, political opposition (his supporters were chiefly Whigs), and complaints that he was taking other commissions concurrently with the Custom House project. The building was completed on April 30, 1847, for $39,168.33. It was a handsome 3-story building faced in Connecticut sandstone and Baltimore pressed brick. (These materials had to be imported to Wilmington, adding to the cost of the building.) Its main, pedimented façade, overlooking the Cape Fear River, featured columns in the order of the Tower of the Winds, evidently the first local use of a late Grecian order that became widely popular in Wilmington. The Custom House was razed in 1915 for the present United States Custom House by James A. Wetmore, which reproduces Norris’s façade in its end pavilions.

There is no documentation of the private residential work Norris did in Wilmington. One house proposed as a possible Norris design is the Greek Revival style Armand J. DeRosset, Jr., House, begun in 1841 and credited by family tradition to Christopher Dall and an unnamed architect. (DeRosset was on the vestry of St. James Church and later signed a testimonial in support of Norris’s good work.) Another tentative attribution is the P. R. Dickinson House, where the façade bore a resemblance to the Bank of Cape Fear. Also unknown is whether Norris had any interaction with builder Benjamin Gardner in planning such sophisticated 1840s buildings as the Wilmington Market House or the John A. Taylor House (see Benjamin Gardner). In addition, stylistic features suggest that he might have designed the Masonic Hall (1841) which has Gothic detailing in common with some of his later work in Savannah, though it may have been designed by local builders such as the Wood brothers.

While engaged on the Custom House in Wilmington, Norris submitted a design to the United States Treasury Department for a custom house in Savannah. His proposal was accepted, and he was appointed to superintend construction. He went to Savannah in 1846, returning to Wilmington occasionally to attend to his Custom House project there. He enjoyed a wide practice in Savannah, designing at least twenty buildings, including the famous Gothic Revival style Green-Meldrim House. Norris died in 1876 in Blauvelt, New York, where he had been living quietly on a farm he owned. He was buried along with his wife, Sarah, in the Greenbush Presbyterian Church cemetery. Treasured items he bequeathed to relatives in his will evoke his profession and his success in it: a box of drawing instruments, squares and drawing boards, a tool chest and tools, portraits of him and his wife, gold and silver watches, a gold pen and pencil, and a carriage. To his niece, Amelia Wray, he left “the silver pitcher presented to me by the Bank of Cape Fear, North Carolina.”