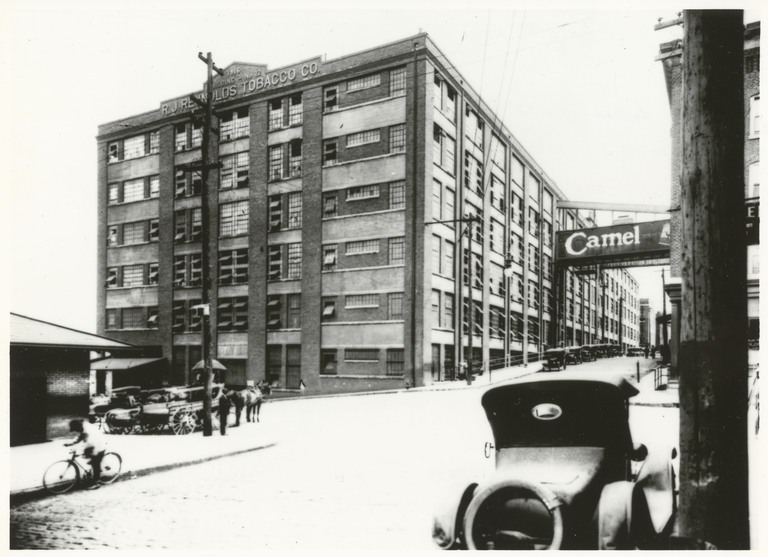 Joseph E. Sirrine was born in Americus, Georgia, to George William and Sarah Euodias Rylander Sirrine. His father was a carriage and wagon manufacturer in Americus and later in Charlotte, North Carolina. Joseph was educated at the Greenville, South Carolina Military Institute (1883-1886) and at Furman University in Greenville, where he received his Bachelor of Science degree in 1890. He commenced professional practice as an engineer in Greenville in 1890. In 1898, he married Jane Pinckney Henry. Sirrine soon became one of the leading businessmen in the New South city of Greenville and one of its most influential citizens.

Early in his career, Sirrine was employed by the nationally renowned industrial architecture and engineering firm of Lockwood, Greene, and Company, in their newly established southern office in Greenville in the heart of the Carolinas textile belt. One of the most important firms of its type in the nation, the New England based Lockwood, Greene, and Company was formed in 1882 in Providence, Rhode Island, by Amos Lockwood and Stephen Greene. After Lockwood’s death in 1884, the business continued under the same name under the leadership of Stephen Greene (who died in 1901) and his son, Edwin, and beyond. Between 1884 and 1901, the company expanded dramatically, including establishment of a Boston office, pioneering work in electric power for textile mills, and development of southern markets.

When Lockwood, Greene was planning its first mill in Greenville in 1894, the firm employed the young civil engineer Joseph E. Sirrine to do some of the local work, and subsequently hired him for additional jobs. In 1898 Sirrine became a fulltime employee, and when the company established its first regional branch office, the southern office in Greenville, Sirrine became head of the office and southern manager for the firm. According to a history of the company, Sirrine “represented Greene on all work in this territory until the latter’s death in 1901.” Sirrine is said to have supervised from six to eight mill jobs at the same time, a total of about twenty mills in the three-year period. His role appears to have been primarily supervisory, with much of the actual engineering and architectural work coming from the firm’s office in Boston. During his tenure, the Lockwood, Greene Company planned many factories—most of them in South Carolina—among which the immense Loray Mill (1900-1902) in Gastonia, North Carolina, was especially important as one of the largest and most technologically advanced mills in the nation. Sirrine’s initials, J. E. S., appear on a plan of the Loray village, showing the layout of streets and buildings. Frank W. Reynolds, another Lockwood, Greene employee, initialed the drawings for the mill itself. Sirrine’s involvement in these and other Lockwood, Greene projects requires further research.

In 1902 Sirrine resumed independent practice as an architect and engineer in Greenville, and he maintained his office until his death in 1947. A large number of the draftsmen and designers who worked with him later became prominent architects. Among these were Joseph G. Cunningham, H. Olin Jones, Hugh Chapman, James D. Beacham, and Leon LeGrand, the latter two of whom practiced in Asheville and western North Carolina.

J. E. Sirrine of Greenville, South Carolina, was licensed to practice architecture in North Carolina in 1916. His license certificate was #74 in the official registration book of the North Carolina Board of Architecture.

In 1921, as business expanded, Sirrine formed a partnership with eight of his associates, called J. E. Sirrine and Company. His letterhead in that year read, “J. E. Sirrine & Company, Successors to J. E. Sirrine, Mill Architect and Engineer, Greenville, S. C.” The firm’s practice spanned the eastern and southeastern United States, with projects as far away as Maine and Texas. During the 1920s, the company had an office in Dallas, Texas. The firm specialized in textile mill projects, pulp and paper mills, power plants, municipal facilities, tobacco factories, and aluminum plants, providing both architectural and engineering services. Sirrine served on the boards of many major southeastern industrial companies, including nineteen textile companies in South Carolina and elsewhere. Among these was the Marion Manufacturing Company, in Marion, North Carolina. He also served on various boards and committees to represent the interests of the textile industry.

J. E. Sirrine and his firm were responsible for mills, mill village housing, tobacco factories and storage facilities, and other buildings as far west as Asheville and as far east as Roanoke Rapids; further exploration and documentation of the firm’s work is needed. In 1923, the company placed an advertisement in the magazine Commerce and Finance citing their work for Greensboro’s major textile plants—Pomona Mill Company, Proximity Manufacturing Company, Proximity Print Works, Revolution Cotton Mills, and White Oak Cotton Mills. These were large complexes established several years earlier (all but Pomona by the Cone family); the Sirrine advertisement stated that “our work for them has covered several phases of engineering” but did not indicate which of these textile plants’ buildings Sirrine and Company had worked on.

The Manufacturers’ Record and Nannie Mae Tilley’s history of the R. J. Reynolds Company indicate that Sirrine’s firm planned several buildings for the Reynolds company in Winston-Salem during the industry’s expansion in the early 20th century. Not all of these buildings have been specifically identified or confirmed as Sirrine’s work. Further information on Sirrine buildings in Winston-Salem is especially sought, for the city retains a number of industrial buildings including tobacco facilities of architectural distinction from his period.

A characteristic feature of the Sirrine company’s designs was the use of “mushroom” type concrete columns and cast concrete floors. One of Sirrine’s most intact surviving buildings is the Grinnell/General Fire Extinguisher Company Complex in Charlotte, which features reinforced concrete, steel, and brick construction and large, unimpeded spaces. During World War II, the firm company planned many military installations, including air bases, ammunition depots, shipyards, and military camps, including work at Fort Bragg, North Carolina. The firm continued for many years after its founder’s death and was acquired in 1983 by CRSS, an engineering company based in Texas.

Note: The building list for Sirrine (covering the period of his lifetime) reflects data obtained mainly from notices in the Manufacturers Record. Only a few of these have been confirmed. For many of these and other industrial buildings of the early 20th century,there is little information about their status or survival. Many have been renamed, altered, or destroyed. For textile mills, especially, recent losses have been extensive, and examples standing only a few years ago have been lost. Further information is sought about the status and location of these projects, as well as other work by Sirrine and other similar companies.