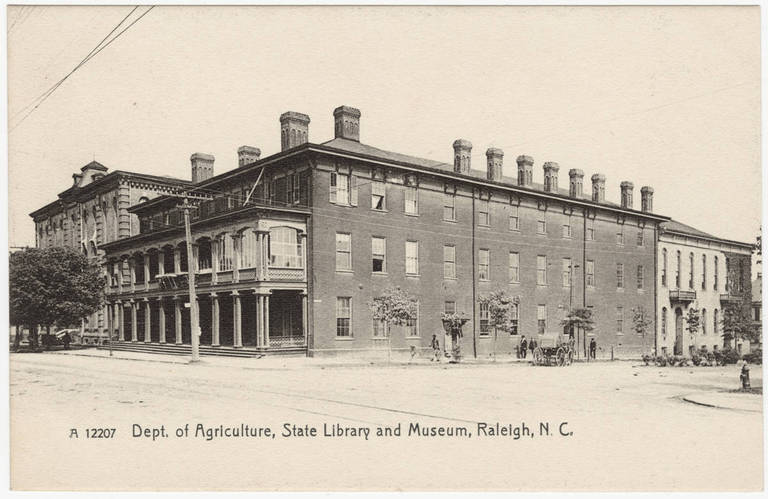 Two promising young graduates of the North Carolina College of Agricultural and Mechanical Arts (present North Carolina State University), Charles A. Pearson (Oct. 24, 1875-July 26, 1966) and Thomas M. Ashe (Feb. 11, 1876-July 10, 1900) began the Raleigh architectural firm of Pearson and Ashe soon after their graduations and quickly met with success in designing public, residential, and educational buildings. After only a few years, Ashe’s premature death terminated the partnership, and thereafter Pearson continued on his own chiefly as a civil engineer in various southern states.

Charles A. Pearson was born in Asheville to Capt. Charles W. and Susan Bruce Shepard Pearson of an established western North Carolina family; his father was a civil engineer specializing in railroad construction in the mountains. Pearson studied civil engineering at the College of Agriculture and Mechanic Arts and taught there briefly. Thomas M. Ashe was born in Raleigh, the third son of noted journalist and historian Samuel A’Court Ashe and part of a family with deep roots in the colonial Cape Fear region. He graduated from the College of Agriculture and Mechanical Arts in 1895. Pearson and Ashe, both members of Sigma Nu fraternity, formed their business partnership in 1895 or 1896.

Probably aided by Ashe’s family connections as well as their college and fraternity associations, the two men soon took on many substantial projects. In 1897, the Manufacturers’ Record noted that Pearson was supervising architect for a major downtown Raleigh project, First Presbyterian Church (see Pearson’s building list); whether Ashe had a role in this project is unknown. It is not known how Pearson and Ashe divided the work during their partnership. In some cases, the Manufacturers’ Record notices mentioned only Pearson, while others cited both men. Most buildings believed to have been planned during their partnership are credited to the firm in the building list.

Subsequent projects included a major expansion of the National Hotel [State Agriculture Building] in downtown Raleigh in 1899, and a dormitory, Carr Building, at the University of North Carolina in Chapel Hill. In 1899 the young firm reached the apex of its popularity in Raleigh when Pearson and Ashe were appointed by the local school board as supervising architects for all school buildings. The News and Observer asserted on November 24, 1899, that the architects were “not only past masters of their art, but also cultured, pleasant gentlemen.” To help with business, they employed as a draftsperson “Miss Bonniwell.” This was probably Norma N. Bonniwell, the architect daughter of Hickory builder George C. Bonniwell. (None of the schools planned by Pearson and Ashe is known to survive; among them was the first Wiley Graded School in Raleigh.)

In July 1900 after a long illness, evidently typhoid, Ashe died of a heart attack. The firm placed no notices in the Manufacturers’ Record during 1900. Pearson strove to keep his practice going, and placed a few notices in the Manufacturers’ Record in 1901 concerning plans he had provided for Raleigh buildings. However, in 1901 he left Raleigh and worked as a civil engineer in various southern states as well as an architect.