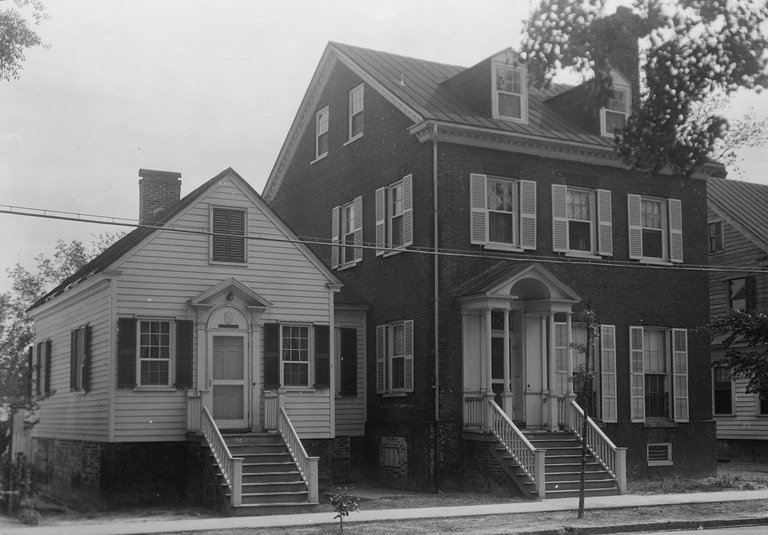 Martin Stevenson (1776-1849) was a house carpenter, joiner, and undertaker long prominent in New Bern. In his account of New Bern in the early 1820s, memoirist Stephen Miller wrote, “Martin Stevenson occurs most readily as one of the leading mechanics of Newbern. He was much employed in the construction of fine dwellings and offices where a great deal of ornament was necessary. He was prompt, skillful and industrious, and highly respected.” Stevenson is best known for his work on New Bern’s premier Federal period churches and an especially fine townhouse.

Martin Stevenson was born in February, 1776, the son of James Stevenson. In March, 1790, at the age of fourteen, he entered an apprenticeship in the house carpenter’s and joiner’s trades with master artisan Joseph Palmer. Stevenson became an established citizen of the community, a property owner, and a member of the Baptist church. On August 11, 1799, he married Martha Cauthorn. Their children were James C., Martin, Jr., and Martha. Martha married William Willis Clark, the son of New Bern leading citizen and artisan Elijah Clark. Their son Charles Cauthorn Clark (1829-1911) became a North Carolina state senator and the Grand Master of the North Carolina Masons. The Stevenson family prospered sufficiently to live in a substantial house: a large frame residence at 211 Johnson Street (on part of lot 129), the former home of prominent local brickmason Joshua Mitchell, which Stevenson purchased in 1824. Stevenson may have enriched the house with his own transitional Federal-Greek Revival-style woodwork after the purchase.

Like many artisans of his day, Stevenson engaged in a variety of economic pursuits. In the New Bern Carolina Federal Republican of August 24, 1816, Stevenson advertised a boarding house and tavern in a leased house recently occupied by a Mrs. Bartlett. Two years later, he advertised in the New Bern Carolina Centinel of July 11, 1818, for “boarders and transient customers” to stay at his Farmer’s Hotel, at the corner of Pollock and Middle Streets, opposite Christ Episcopal Church. In the October 14, 1820, Carolina Centinel, Stevenson advertised his “Shop Joiner’s and House Carpenter’s Business,” a shop located opposite John Stanly on the east side of Middle Street. In the October 14 and October 28 issues of the Centinel he offered coffins and his services at funerals and burials, not an uncommon sideline for a carpenter who could manufacture coffins.

Although Stevenson was probably involved in many building projects, three major works stand out: the city’s two finest Federal period churches and a handsome brick town house. For these and other buildings, Stevenson accomplished the fine carpentry, while other men undertook the masonry work and other tasks.

In the earliest project documented as Stevenson’s work, records show that Stevenson and his enslaved workman Stephen executed much of the fine Federal style carpentry at the James Bryan House (1803-1806). In 1803, merchant James Bryan contracted with Stevenson to work “on said Bryan’s building . . . to finish the house or so much thereof from time to time as sd. Bryan may think proper.” (Bryan’s agreement, it should be noted, stated that Bryan might hire other workmen for the job if he deemed it appropriate.) Stevenson agreed to work for $1.25 per day, and to charge 50 cents a day for “his Boy Stephen.” Stevenson worked steadily from September 12, 1803, until August 30, 1804, and was paid $371.25. After Bryan died in 1806, Stevenson billed for further work, including “finishing the upper flight of stares and entry in best manner, Finishing the garret in plain manner” and other tasks. He also made a writing desk in 1805, and in February, 1806, made a coffin ($8.00) and a “ruf box to set Coffin in” ($1.25). When completed, the Bryan house was one of the finest of the city’s handsome side-passage-plan brick townhouses, featuring restrained but intricate Federal style woodwork throughout, from the Palladian motif of the front portico to the interior moldings and Federal mantels with carved sunbursts. As a documented example of Stevenson’s work it provides potential clues for attributing other projects to his hand.

After James Bryan’s death, the elegant brick house descended to his son, John Herritage Bryan, a lawyer who served as congressman (1825-1829). While he was in Congress, John H. Bryan hired Stevenson to do nearly $1,000 worth of alterations to update the Bryan House, including changes to the drawing room, addition of partitions, finishing of windows and a mantel, as outlined in letters from Bryan to his wife in 1828. Bryan encouraged her to put Mr. Stevenson to work right away on the alterations, and commented that “chair boards” (chair rails) were out of fashion. Stevenson may also have built the adjoining Bryan Law Office (ca. 1820), a small frame structure in similar style, and a rare survival of the small professional offices built adjacent to principal residences of lawyers, physicians, and other men in New Bern.

During the years 1819 to 1822, Martin Stevenson and another leading New Bern builder, John Dewey, worked with contractor Uriah Sandy to build New Bern’s large and elegant First Presbyterian Church The Federal style frame edifice features a tall entrance portico of full-height Ionic columns, a pedimented main façade, and a multi-staged tower. Urns once adorned the front corners of the portico and main roof. Based on its sophisticated design and certain motifs, English architect William Nichols has been proposed by Peter Sandbeck and others as a possible influence on its design, but there is no documentation of a connection.

In the fall of 1820, after the Presbyterians had begun work on their fine frame church, the building committee of Christ Episcopal Church advertised in the Carolina Centinel for builders to erect a church about 70 by 50 feet, of brick with shingled or slate roof, two aisles, galleries, room for an organ, pews and other fittings, and to have “high arched windows.” Local men successfully bid for the job, and for this project Stevenson took an especially prominent role. At the cornerstone laying for the church on July 5, 1821, as reported in the Carolina Centinel of July 14, the dignitaries in the long procession for the ceremony included the “architects” Martin Stevenson and Thomas S. Gooding, and “master masons” Bennett Flanner and Wallace Moore. In this period, the term “architect” often referred not only to the man who provided the design for a building but also to those chiefly responsible for managing its construction. As is the case for other stylistically advanced New Bern edifices, the name of architect William Nichols has been mentioned as a possible designer for the church, but there is no documentation.

Christ Church was the first example of the Gothic Revival style in New Bern and among the first such examples in the state. As shown in a photograph taken before it burned in 1871, the church with “high arched windows” was built of brick and had tall pointed-arched or lancet windows. In many respects, it was a Gothic Revival version of the First Presbyterian Church, with similar forms though different details, and a spire instead of a cupola atop the multi-staged steeple. The original entrance portico, which featured very slender columns, sheltered a blind arch in the façade, and there were small obelisks on the corners of the upper steeple. In 1871, the roof and upper portion of the church was destroyed by fire, and it was subsequently redesigned and rebuilt on the old walls.

Like other New Bern free artisans, Martin Stevenson employed slave artisans in his workshop. For the Bryan project, he specified in the agreement that he would charge 50 cents per day for his “boy” Stephen, and the account with Bryan listed the days Stephen worked. On another occasion, in 1824, he hired a slave carpenter named Ben from his owner, John Donnell, at the rate of $18 for a 26-day work month. When Stevenson did repairs and other construction work on various public buildings for Craven County in 1827, his bill included his own labor at 17 shillings, sixpence per day plus that of his “Man Daniel” at 10s. per day and his “Boy Emanuel” at 6s. per day. The United States censuses of the early 19th century indicated that Stevenson owned one or two slaves. As a master artisan, Stevenson also took apprentices to his trade, including James Murdock, aged seventeen, to the joiner’s and house carpenter’s trade on June 10, 1805—probably to assist on the Bryan House project.

By the late 1820s and early 1830s, New Bern’s economy and its building business had sagged, and Stevenson announced in the New Bern Spectator of January 15, 1831, that he had “ceased carrying on the House Carpenter’s and Joiner’s business in Newbern for the present.” He thanked his friends for their “very liberal encouragement,” and announced that in addition to offering coffins of mahogany, poplar, or pine, he had constructed “a neat Bier or Hearse, for the more decent interment of the deceased,” and also tendered his “services to assist in the funeral solemnities.” With the burial business steady even in hard times, in the mid-1830s he was selling gravestones, including white marble stones from a New Haven factory, as well as coffins. In 1840, he ceased serving at burials and had disposed of his hearse, but was continuing as an agent for a northern tombstone factory.

Stevenson died on November 30, 1849, aged seventy-three. After his death, some of his New Bern real estate was offered for sale, including a house and lot on the south side of Union (now Johnson) Street adjoining on the east the lot where his son, Martin Stevenson, Jr., was living. New Bern memoirist John D. Whitford, who knew Stevenson well “towards the close of his life,” said of the long respected carpenter, “If driving nails and shoving plains hardened his hands they did not his heart and added worth to his name.”