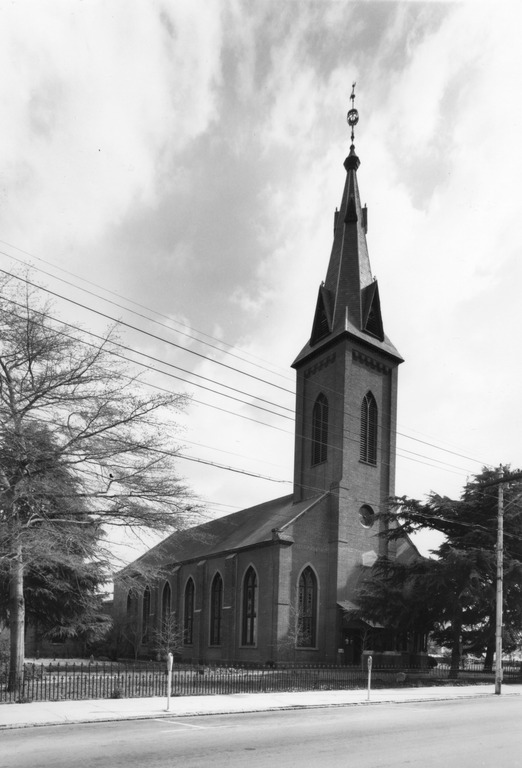 Bennett G. Flanner (1794-1868) was a brickmason active in New Bern during the city’s Federal period heyday and known for his daring work at great heights. His parentage and early training are not yet documented. Like other men in the “trowel trades,” Flanner sometimes undertook plastering as well as brickwork: John Donnell’s account for construction of his fine brick townhouse (1816-1818) included several small payments to Bennett Flanner, “plasterer.”

Flanner was identified in the New Bern Carolina Centinel of July 14, 1821, as one of the two brickmasons who constructed the imposing, brick Christ Episcopal Church in 1821-1824. Along with Martin Stevenson and Thomas S. Gooding, who were identified as “architects” for the edifice, “master masons” Flanner and Wallace Moore marched in the procession to the laying of the cornerstone for the church in 1821. The brick church was constructed with the city’s favored Flemish bond brickwork and featured door and window openings in the pointed arched shape of the Gothic Revival mode then new to the city. Christ Church burned in 1871, destroying the upper stories and roof, and it was redesigned and rebuilt on the old walls; Flanner and Moore’s workmanship of the brick structure is all that remains of the original building.

In his memoir of New Bern in the early 1820s, Stephen Miller recalled the young Flanner with special vividness: “Bennett Flanner was among the leading men of his line, and completed the new Episcopal church edifice in 1824. He was bold, fearless, and persevering. He moved on the scaffolding high in the air, apparently with as much indifference as if standing on the pavement below. I saw him stand erect nearly a half hour on the apex of the steeple, not less than 150 feet high, with no other surface of support than the twenty or thirty inches diameter on which his feet rested.” In 1832, he was chosen along with other respected local builders (Hardy B. Lane, Sr., Joshua Mitchell, and Donum Montford) and other citizens to inspect and approve repairs to the church.

Like some other artisans, Bennett Flanner left his trade to seek his fortune in other enterprises. When he married Susan A. Green (1812-1890) on February 27, 1835, he was identified as a merchant in the New Bern Spectator. The couple remained in New Bern into the 1840s and had several children including Joseph, William, Caroline, Henry, Bennett, and Charles. Flanner owned town property including a lot on East Front Street, also known as the Clark property. He owned several slaves—seven in 1830 and ten in 1840—some of whom probably assisted him in his business. By 1850, Flanner left New Bern for the thriving port city of Wilmington, where he prospered in the naval stores business. In the United States Census of 1850, he was listed there as a manufacturer aged 56, owner of $10,000 in real estate and 22 slaves, many of whom probably worked in his naval stores operation. He was head of a household that included his wife, Susan, and their children. By 1860 he was identified as a commission merchant and owner of $25,000 in real estate and 21 slaves. He, Susan, and their two sons William and Henry were interred in Wilmington’s Oakdale Cemetery.