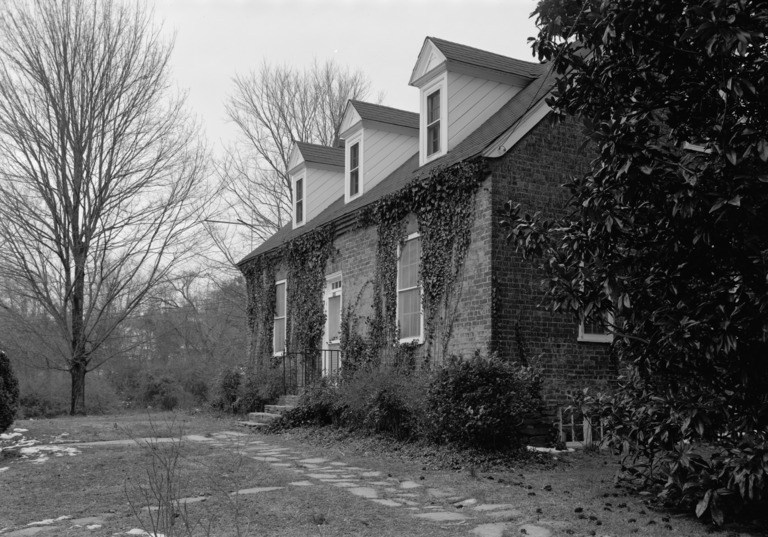 Samuel Hancock (1784-April 11, 1848), a brickmason and brickmaker in Hillsborough during the early 19th century, served as mentor to Hillsborough’s distinguished brick builder John Berry and worked with Berry for several years.

The Hancock name first appears in Orange County records in the 1780s. Samuel Hancock, whose father may have been Henry Hancock, could neither read nor write. His wife, Susan or Susannah Richards Hancock (1781-October 6, 1864), appears to have been distantly related to Rhody Berry and her son John. In 1811 the Hancocks were living on Lot 72 in Hillsborough, diagonally across West Queen Street from Mrs. Berry’s Lot 54, and strong local tradition has it that in about 1814 the kindly Samuel Hancock assisted young John Berry in the construction of the Berry family’s brick house (Berry House) at 208 West Queen Street. In 1815 Hancock also gave the 17-year-old Berry his first chance at a paying job as a bricklayer, constructing the Hillsborough Presbyterian Church on the old town cemetery lot, Lot 98. These projects began an association with the Berrys that ended only with Susan R. Hancock’s death in 1864.

Hancock, like Berry, became involved in the affairs of the new church. Susan Hancock joined the church on October 27, 1816, and Samuel Hancock on November 17, 1821. Samuel also rented a pew in the church and contributed toward the pastor’s salary and a bell for the church.

In 1819 Hancock, assisted by a $50 loan from Dr. James Webb, bought lots near the Eno River to establish a brickyard, which became known as the Webb-Hancock brickyard. Although Hancock worked regularly at his trade, he frequently found himself in financial difficulties. Dr. Webb’s papers include many notations indicating Hancock’s financial dealings as well as many of his small masonry jobs in Hillsborough, which included building brick chimneys, steps, and underpinnings. In 1834, during a period of economic troubles for many North Carolinians, Hancock went bankrupt, after which he struggled for the rest of his life to repay Dr. Webb, who bought the Hancocks’ house and lot, their furniture, and their slave Abram, and rented them all back to Hancock for $1.00 per year. Webb also paid the tuition fees for the Hancock children (Susan and John) and in effect supported the family.

In contrast to his handling of financial matters, Hancock’s competence at his trade was never questioned. The rising John Berry employed him regularly as his masonry associate and overseer for projects.

In 1824 the Person County commissioners employed Hancock as one of a trio—Hancock, Berry, and carpenter John A. Faucett—to build a new Person County Courthouse. This was a handsome brick edifice with classical detailing, for which detailed specifications still survive. Later on, such large contracts typically went directly to Berry. With Berry, Hancock accomplished the fine brickwork at numerous houses in Hillsborough as well as notable brick public buildings and churches in Hillsborough, Yanceyville, Salisbury, and Wake Forest.

In 1835 and 1836, two Raleigh contracts came to Hancock on his own, who was then working with John Berry on buildings at Wake Forest College in Wake Forest.

Both of Hancock’s Raleigh projects were connected with banker and planter Duncan Cameron. Hancock agreed to furnish brick and perhaps to supervising laying some of it for the new 4-story Main Building (later Smedes Hall) at the Episcopal School of North Carolina (now St. Mary’s School) in Raleigh. Records of the school building committee noted on July 1, 1835, “one hundred dollars advanced to Samuel Handcock [sic] on his contract for furnishing brick,” and documents in the William Laurence Saunders Papers include payments to Hancock for various workmen on the job. Duncan Cameron, chief sponsor of the school, was also building a house for himself (Duncan Cameron House) across Hillsborough Street from the school. Cameron Family Papers include a bill in 1836 for Hancock’s work totaling $240.50: chimneys, pillars, brick foundations, rock walls, kitchen floor paving, etc.

In 1842 Hancock’s friend and associate Dr. Webb himself went bankrupt, and the bankruptcy papers noted that the Webb-Hancock brickyard had been operated by the two men “as partners.” The facility continued to produce brick at intervals, but Hancock’s involvement in the operation tapered off after that time. After a few years of deteriorating health, he died at age 64 in 1848. His friend Webb died in 1855. John Berry had previously purchased the Hancock home, and his will written in 1859 enabled Susan Hancock to continue living there until her death in 1864.