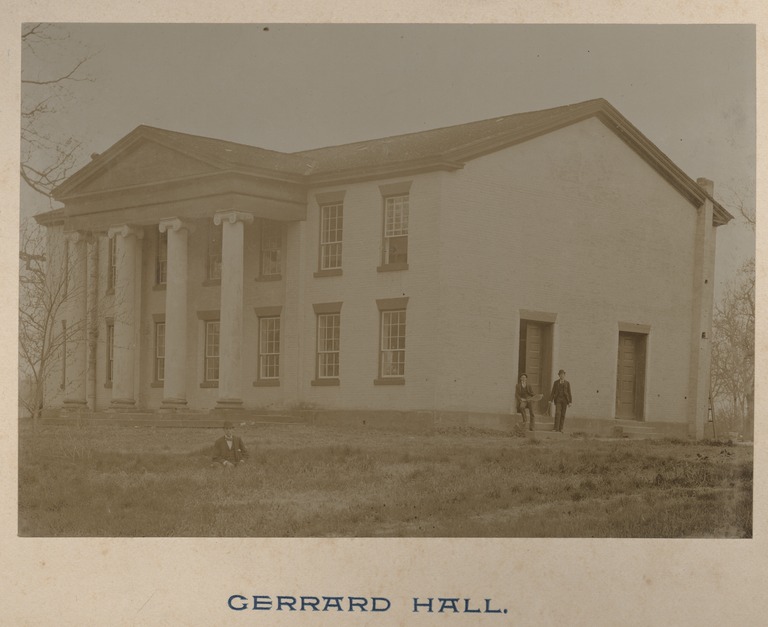 Thomas A. Waitt (Waite) (ca. 1808-1855), was a carpenter and builder from Medford, Massachusetts who was active in Raleigh and at the University of North Carolina in Chapel Hill. When Waitt came to North Carolina is not known. He was probably a kinsman to builder Kendall B. Waitt, also of Medford. Thomas Waitt’s earliest known works included the 3-story brick building that is now Smedes Hall at St. Mary’s School in Raleigh. He and builder William Drummond (formerly superintendent at the State Capitol) undertook the project, which was financed largely by Orange County planter and Raleigh banker Duncan Cameron. Cameron also employed Drummond and Waitt to build his large, frame residence, the Duncan Cameron House, which stood across present Hillsborough Street from the campus. In 1837, while the house was under construction, Drummond left Raleigh, leaving Waitt in charge of the project. Cameron family papers include several bills and receipts from Fayetteville suppliers, addressed to “Mr. Thomas A. Waite, Esq., Architect.”

Probably because of Cameron’s position as a trustee at the University of North Carolina, Thomas A. Waitt became the university’s “Superintendent of Buildings” for a brief period. In January 1836, Waitt was corresponding with professor Elisha Mitchell about possible construction of an observatory on the campus, and that summer he offered a proposal to repair the university’s steward’s hall and outbuildings. Among his duties was completion of Gerrard Hall, a 2-story brick building raised but left unfinished by William Nichols in 1822. Waitt finished the interior, replaced the shingled roof with tin, and built the Ionic portico planned by Nichols. Kemp P. Battle, historian of the university, commented that “the chief carpenter and manager was Thomas Waite, a man of force but careless in his financial dealings; extravagant but not chargeable with dishonesty.”

The university trustees decided to build a monument on campus to honor former President Joseph Caldwell. A sandstone obelisk design proposed by Waitt was selected, after advice from architect David Paton. It was installed, but the sandstone subsequently deteriorated, and in 1858 it was replaced with a marble obelisk. Waitt’s marker was later moved to the Chapel Hill cemetery, where it marked the graves of university slaves. Also in 1837, the university trustees planned to erect a building in honor of Caldwell, to contain a laboratory, lecture room, and library. Battle stated that Waitt was “instructed to take measures for its construction,” but because of his “unbusinesslike” management of the Gerrard project and others, the project was suspended. A bill from Waitt to the university trustees lists various free and enslaved workmen who were working with him in the spring of 1837, including Kendall B. Waitt and numerous other carpenters, bricklayers, and a rock cutter.

In 1840, Thomas Waitt joined Raleigh builder Dabney Cosby in designing and building a large brick residence with full portico, called “Will’s Forest,” for a member of the Mordecai family. The contract indicates that Waitt drew the plans. He was to do the carpentry work, Cosby the masonry work. The specifications, in Waitt’s handwriting, referred to drawings and called for elaborate interior finish, including “eliptic” arches, a “geometric” staircase, and pilasters framing the parlor doors and windows. (George W. Mordecai Papers, Southern Historical Collection.) Cosby and Waitt also built a greenhouse for Duncan Cameron, probably at his Raleigh residence, in the 1840s.

Thomas Waitt married Grizzy Robinson (Robertson) of Wake County in 1836 and in later years lived on a farm in Wake County with her and their children. Records for Medford, Massachusetts list the marriage of Gressy Robinson of North Carolina to Thomas Waitt, son of Darius and Marcy (Mercy) Waitt of that community. He died intestate in 1855.