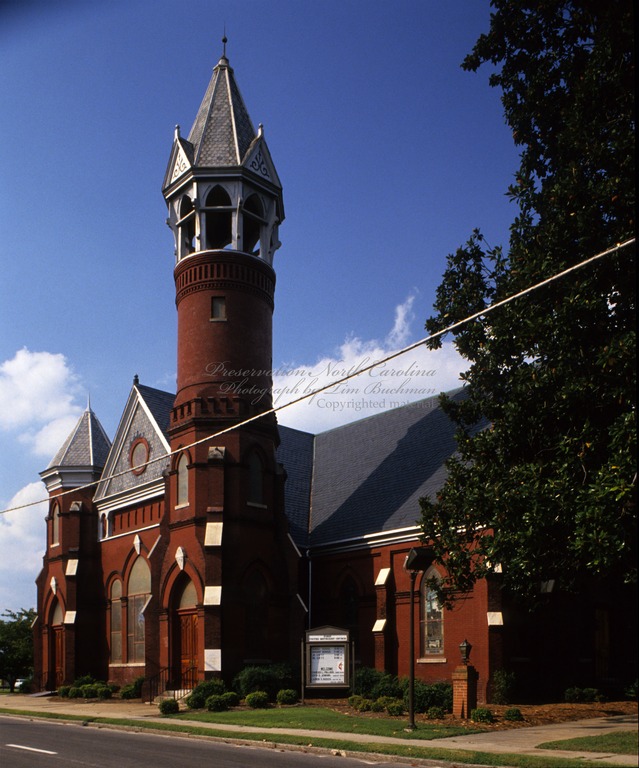 Charles E. Hartge (September 1, 1865-October 25, 1918), a German-born architect originally named Carl Emil Hartge, designed many churches, schools, and other buildings in central and eastern North Carolina around the turn of the 20th century. After coming to the United States in 1882, he settled in Tarboro by 1888, when he applied for American citizenship, and by 1890 had an established architectural practice there. He married Effie, a woman from Wayne County, and they had three daughters.

In his application for a passport in 1895 (in advance of a family trip back to Germany), Hartge stated that he was born in Hamburg, Germany, and had emigrated to the United States on the Steamer “Gelbert” from Hamburg in 1882. He had lived “mostly in North Carolina” since arriving in the country. For the passport application, he used the name Carl Emil Hartge, probably the original spelling, though he had been using the Anglicized name Charles regularly.

From Tarboro he wrote in 1890 a revealing letter to J. W. Root of Chicago, an officer of the national American Institute of Architects. He noted that that he had just completed Tarboro City Hall and some residences and had a substantial (unnamed) church underway. He was supervising “the more complicated buildings in this vicinity, that is build them from the jump.”

Hartge’s 1890 letterhead indicates his versatility in a time and place that rewarded such activity: “Office of Charles E. Hartge, Architect& Builder/ Manufacturers Agent for All Kinds of Seasoned Lumber, Sash, Doors, Blinds, Mouldings, Brackets,/ also Galvinized Iron Cornices, Finials, Crestings, &c.” He offered “plans and Specifications Carefully Prepared for All Kinds of buildings at Reasonable Prices. Also Buildings Superintended.” He also promised “Contracts taken for All Kinds of Buildings. Estimates Furnished on Application.” His letter to Root gave the rationale for his flexibility: he preferred to “only make plans, but this country does such a little of work, that I could not earn the Salt, if I was only to draw plans, etc.”

Outside of Tarboro, one of Hartge’s earliest known buildings was mentioned in the Manufacturers’ Record in 1891, which identified him as the architect of the Atlantic Coastline Depot in Rocky Mount, not far from Tarboro; this may refer to the 1-story predecessor of the present brick depot of 1903 and later. The ACL was then building new facilities in towns where he worked—Tarboro, Kinston, Plymouth, and Washington, North Carolina—but his involvement in planning those depots is not established.

Some of his early projects involved the remodeling of prominent antebellum buildings. These included additions (1891) to the Granville County Courthouse in Oxford; a substantial rebuilding (1893) of Grace Episcopal Church in Plymouth—the original Gothic Revival structure by architect Richard Upjohn having been damaged in the Civil War bombardment of the town; and remodeling (1893) of St. Peter’s Episcopal Church in Washington.

The Hartges moved to Washington, where the 1900 United States Census found them residing as a family including Charles, Effie, and their three daughters. Hartge’s work in Washington may have included railroad buildings and, especially, the numerous brick commercial buildings erected there after a downtown fire in 1900. His most imposing work in Washington is the First Methodist Church, where the cornerstone announces, “Designed and erected by C. E. Hartge, 1899.” It is one of the state’s prime examples of the auditorium plan church, executed with superb craftsmanship in the rich brickwork of pressed brick and molded and corbelled bricks, Gothic Revival openings, and especially complex and robust forms including a multi-stage tower. Whether Hartge’s German background had any effect on such compositions is unknown.

Hartge evidently found success among Methodist congregations. Marked similarities with the Washington church suggest that he might have planned the Oxford Methodist Church, in the town where he expanded the courthouse. For the First Methodist Church in Wilson, he produced an auditorium plan with round-arched openings and multiple towers and gables. Again, similarities between this church and the Queen Street United Methodist Church in Kinston are strong enough to suggest his hand in that striking edifice. Hartge, like other architects of his day, probably drew upon popular church design books such as Franklin Kidder’s Churches and Chapels (1895) and others that illustrated churches of similar type.

By 1901 Hartge opened an office in Raleigh, and he soon moved there with his family. In Raleigh he gained several commissions, including Episcopal church work. His Church of the Good Shepherd (1899-1914) is a soberly imposing Gothic Revival design in rough-cut granite with magnificent interiors; a spire planned for one of the towers was never built. At St. Mary’s School, an Episcopal school for girls and young women, he remodeled and expanded the antebellum Smedes Hall by adding a tall portico, dormers, and wings. This was one of several early-20th century buildings where Hartge combined red brick with bold, sometimes eclectic classical detail. Amid the boom in public school building, he produced the red brick Wakelon School (1908-1909), one of the most substantial and elaborate public schools of its day in the county. He likewise used red brick and classical trim in one of his last known works, the Wake County Home, sponsored by the county.

Throughout his career, Hartge took a strong interest in the professional status of the architect, an important issue at a time when the profession was striving for recognition and greater professionalism in the state. In the long letter he wrote in 1890 to AIA officer J. W. Root of Chicago, he lamented the local situation and asked for guidance and rules on proper architectural fees, the accepted quantity of architectural drawings, and membership in the AIA. When the opportunity arose some years later, he participated in organizing the profession in North Carolina. In 1907 he was probably the “H. L. Hartge” reported in the Wilmington Star as having been elected to the board of the North Carolina Architectural Association. In 1913, when architect Hill C. Linthicum reported to Glenn Brown, national AIA secretary, that the North Carolina chapter of the AIA had been “duly organized” in Greensboro, Hartge was among the initial local chapter members. Hartge was one of the first licensed architects in North Carolina. His license certificate, issued in 1915, was #19 in the official registration book of the North Carolina Board of Architecture, one of the early group of men who were licensed in the state based on their having been in professional practice prior to the licensing act of 1915.

Hartge died in Raleigh in 1918; he may have been one of the many victims of the influenza epidemic. His widow, Effie, continued to reside in Raleigh for several years.