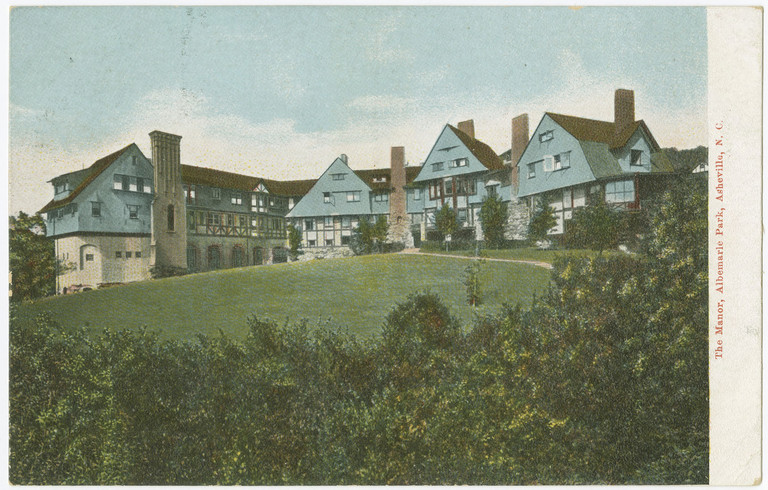 The Manor and Cottages [Asheville]
View larger image and credits

Bradford L. Gilbert (1853-1911) was a nationally active New York architect known for his many railroad stations and as the architect of the Atlanta International and Cotton State Exposition of 1895 in Atlanta. Through his connection with Georgia railroad executive William Greene Raoul, he became the architect for one of Asheville, N. C.’s turn of the century landmarks, the picturesque suburban complex known as The Manor and Cottages at Albemarle Park (1898-1902). Less known is the small but exotic railroad station his firm designed in the eastern North Carolina town of Kinston.

Bradford Gilbert, a son of Horatio Gates and Marie Antoinette Gilbert, was educated at college preparatory schools. In 1872 he became a “student in the office of J. Cleveland Cady, New York city.” In 1876 he became the official architect of the New York, Lake Erie, and Western Railroad. After several years he opened his own office and specialized in railroad structures and public buildings. He is credited with inventing “skeleton construction” with “curtain walls” for skyscrapers, exemplified in his 15-story “Tower Building” in New York (1888), an innovation that gained him widespread acclaim. He was deeply involved in the growing railroad industry, serving as architect or consulting architect for numerous railroad companies and designing important railroad stations in Chicago (the Illinois Central Railroad Station of 1893, demolished in 1974) and many other cities.

It was doubtless through his involvement in the railroad industry that Gilbert became acquainted with William Greene Raoul, a prominent railroad executive who is said to have been a friend as well as a client. (The Raoul Family Papers at Emory University contains correspondence with Gilbert that may shed light on that relationship.) In 1891 Gilbert designed an elaborate residence for the Raoul family on Peachtree Street in Atlanta, where the family lived from 1892 until 1914. (That house burned in 1991.) He also served as the principal architect for the Atlanta International and Cotton States Exposition in Atlanta (1895), and in 1897 he designed the famed Flatiron Building in Atlanta.

William Greene Raoul (1843-1913) was a “railroad tycoon” whose career is described in the finding aid to the Raoul family papers at Emory University. A native of Louisiana, during the Civil War he served in the railroad bureau of the Confederacy. After the war, William married Mary Wadley, daughter of railroad official William M. Wadley, and the couple had several children. In 1870 he and his family moved to Savannah and several years later to Atlanta. He was an officer for various railroad companies including the Central Railroad and Banking Company of Georgia and the Mexican National Railroad Company. He is said to have invented the air brake and sold the patent to Westinghouse. The Raoul family had visited Asheville in the summer of 1886 and decided to make the mountain city their summer home. The long-awaited Western North Carolina Railroad had arrived in Asheville in 1880, stimulating rapid growth and tourism in the “Land of the Sky.”

During the 1890s William G. Raoul and his son Thomas decided to create a novel park-like suburban development called Albemarle Park on Sunset mountain at Asheville and commissioned Gilbert as architect. Thomas Wadley Raoul (1877-1953) had contracted tuberculosis at age 20 and like many fellow sufferers, Thomas moved to Asheville, supposedly in 1897, hoping to regain health from its mountain air. (He went on to live a long life.) Young Thomas evidently took a lead role in the Albemarle Park development, which encompassed a series of buildings over several years. James Albert Tennent of Asheville was the contractor. The June 14, 1898 Asheville Daily Citizen reported in detail on “Work in Albemarle Park: The Manor House Now Under Construction,” and on August 9, the Asheville Daily Gazette gave a glowing account of the project and noted that the Raouls and “Mr. Bradford L. Gilbert of New York city [were] the principal promoters.” Samuel Parsons, formerly of New York, was the landscape designer.

In the first phases, Gilbert designed the expansive Manor Inn as a small hotel; the Lodge (the Raoul residence for a time, now the gatehouse), and five cottages. Displaying picturesque styles considered suitable to the mountain setting, these buildings encompassed shingled, Tudor Revival, chalet, and rustic modes. Additional cottages were constructed over the years. In 1902, the Asheville Daily Gazette of December 7 noted that architect Gilbert had plans under way for three more houses at Albemarle Park and a wing to be added to the Manor Inn. Additional buildings followed (see Charles N. Parker).

Gilbert also had another Asheville connection: architect Richard Sharp Smith, a native of England who had joined Gilbert’s New York office in 1883 and supervised the design and construction of railroad stations. In 1886, Smith joined the office of Richard Morris Hunt in New York and was assigned to the Biltmore project near Asheville in 1889; as supervising architect at Biltmore, Smith gained prominence in Asheville. He made Asheville his permanent home and was a leading local architect during the period when the Manor and Cottages were built.

Although the Asheville project is Gilbert’s best known work in North Carolina, he also had a few other endeavors in the state. In 1895, the Raleigh News and Observer of August 21 reported, “It is understood that Bradford Gilbert the noted New York Architect will submit plans to the building committee for the new Capital Club Building which will be erected this winter.” Gilbert did not win the commission, and after some delays, in 1897 Frank Pierce Milburn became the architect for the club building.

Several years later, the New Bern Daily Journal of October 28, 1905 along with the Raleigh Morning Post of October 29 carried an illustrated article about the new Kinston Atlantic and North Carolina Railroad Depot, for which, it reported, the plans were “drawn by Mr. Bradford L. Gilbert, No. 50 Broadway, New York.” Although it was relatively small, it was striking in design, “Moorish in style, cream colored stucco, with red tile roofing—the sort of building one would expect to find in Florida”—a frequently employed architectural device to suggest the places the railroad might take the traveler. Besides its “architectural beauty,” the station could accommodate future expansion of rail travel for Kinston. The drawing depicted the depot in a landscape of palm trees and mountains quite unlike Kinston’s actual setting in the coastal plain of North Carolina. It was constructed and depicted in a postcard of about 1907. A subsequent union station by Benton and Benton in the same town repeated the romantic styling. Whether Gilbert or his office provided any other designs for North Carolina projects remains unknown.