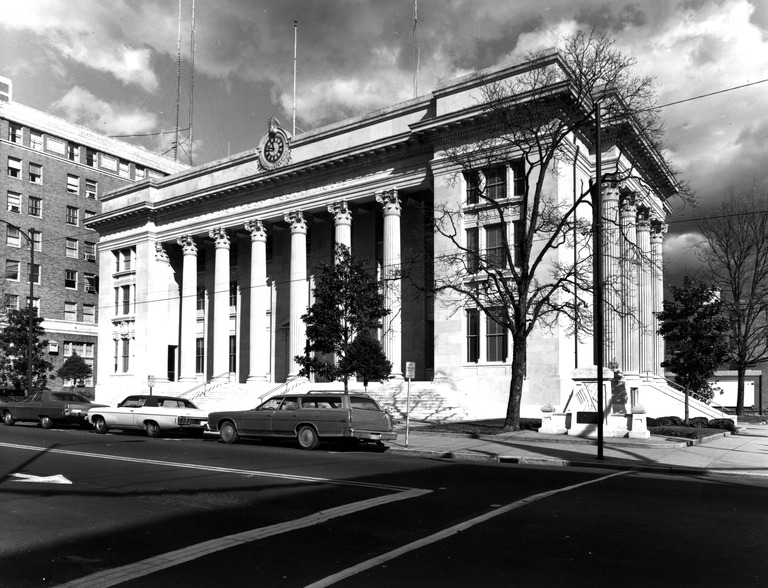 Frederick (Fred) A. Bishop (fl. 1918-1940) was an architect and builder active in Virginia from at least 1918 until 1940; many of his works are listed in Wells, The Virginia Architects. Like many of his contemporaries, he planned buildings in various styles, including especially neoclassical modes. His only known work in North Carolina is his design for the large, neoclassical Wilson County Courthouse II in Wilson (1923-1925).

In the 1920s Wilson County was a thriving tobacco growing county and the county seat, Wilson, was flourishing as a tobacco manufacturing and sales center with a building boom in substantial commercial, religious, and residential as well as industrial buildings. When county officials sought designs for a large new courthouse, several architects from North Carolina and other states submitted sketches in hopes of gaining the commission (see Wilson Daily Times, July 31, 1923). The commission was awarded to Bishop; the Daily Times of August 7, 1923, published a drawing of the proposed courthouse submitted by “Mr. Fred A. Bishop, architect, of Petersburg, Va., and accepted by the Wilson County Commissioners.” It showed a 3-story neoclassical edifice with a dramatic form, with a central curved pavilion from which extended two diagonal wings framing a spacious courtyard. The Daily Times of December 4, 1923 reported that it would have a “semi-circular front”—likely the central portion from which the wings projected. (The August 7, 1923, issue of the Daily Times also published an illustration of a different courthouse design, rectangular in plan with columns, “as submitted to the Wilson county commissioners by Benton and Benton, local architects. These plans were one of four which were favorably considered by the commissioners, the plans of Mr. F. A. Bishop of Petersburg being accepted. We publish this picture as a compliment to the local architects.”)

For whatever reasons, the county commissioners decided that significant changes needed to be made to Bishop’s design, likely to reduce the cost. Several months elapsed between the announcement of the selection of Bishop as architect in August 1923 and the awarding of the construction contract in April 1924, possibly reflecting adjustments in the design. As reported in the Wilson Daily Times of April 1, 1924, fifteen contractors from North Carolina and adjoining states bid on the project, and the contract went to W. P. Rose (likely William P. Rose). Construction began in 1924 and was completed in 1925.

As built, the 3-story stone edifice differs from the original Bishop drawing. Much simpler in form though similar in several details, it has a generally rectangular plan, with a recessed portico of giant order Corinthian columns on the main front facing Nash Street and a side portico facing Goldsboro Street. The handsome and well-preserved building with its tall porticoes emphasizing its prominent corner site is a prime landmark in Wilson’s downtown streetscape.

Note: The new courthouse replaced a towered predecessor, the 19th century Wilson County Courthouse designed by Edmund George Lind and altered over the years. The Daily Times reported on May 6, 1924, the public attention to the destruction of the old courthouse tower and “the roaring cry which it uttered as its shattered walls fell [to] the ground around it.” The rest of the building had been demolished already leaving the “lofty brick tower, which for several days held its old position, alone in its glory.”