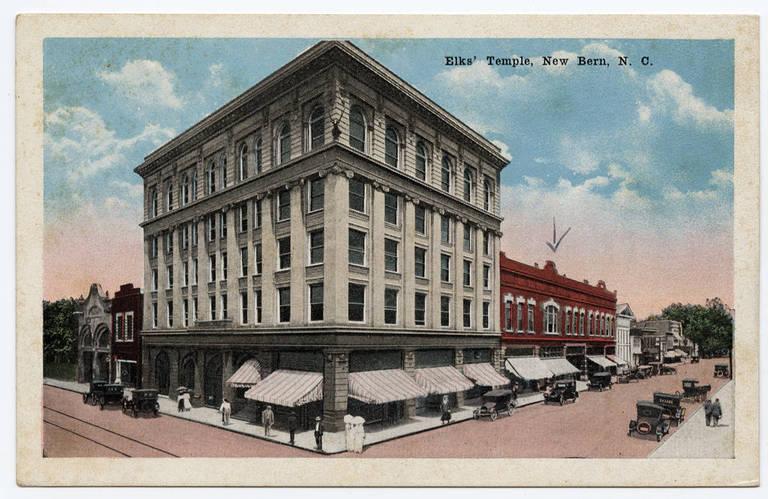 William Preston Rose (1870-1952), architect and contractor, designed and constructed many buildings large and small in eastern and central North Carolina. A native of Johnston County, he typified the fluidity of the building professions during his long career. He began as a carpenter, then emerged as a self-taught architect in the late 1890s. About 1910 he shifted toward the contracting business and established one of the state’s largest contracting firms of the early 20th century. Rose lived briefly in Raleigh, Rocky Mount, and Greensboro, but by 1920 he had settled down in Goldsboro. When his contracting business failed early in the Great Depression, he founded a building supply company that he operated for the next two decades.

William P. Rose was the son of planter and millwright George P. Rose and Nancy Brunt Rose. He was born in Johnston County but moved with the family to Wayne County. He was educated at the local Grantham School, the Turlington Military Academy, and the Burlington Institute at Smithfield. In his youth William worked on the family farm and as a carpenter. After completing school he returned to Wayne County, where he built with his own hands a small frame church near Grantham.

Rose “broke into the building designing business” in the 1890s after educating himself from books available at the time (Goldsboro News-Argus, March 1, 1951). His older brother, David Jeptha Rose had established himself as a contractor in Wilson in the early 1890s; William joined him for a few years as part of “D. J. Rose and Brother”, and the firm published in 1897 a drawing for an elaborate Queen Anne style residence in the regional journal, Southern Architect. One of the houses built in Wilson in this period was their E. F. Nadal House, one of the town’s best preserved examples of the Queen Anne cottage mode.

Soon the brothers went out on their own, William to work as an architect in Raleigh, and David J. as a large contractor in Rocky Mount (his firm D. J. Rose has continued). In 1899 in Raleigh, William joined briefly with architect Charles W. Barrett in the partnership of Rose and Barrett, and the two published a drawing for a “complete modern Southern home” in Southern Architect in March, 1899, and a photograph of their Queen Anne style E. M. Fleming House in Wilson in the same journal the following July.

By 1900 William P. Rose was working alone. In that year he was listed in Raleigh as an “architect” and head of a small family including his wife, Fannie Grantham of Goldsboro, and their young children. (In 1902 Fannie died along with their newborn son; William soon married his second wife, Virginia [Jennie] Pollock, a native of Virginia.) To promote his career as a budding architect, Rose published a promotional volume entitled That House in 1900, which showed designs chiefly in the Queen Anne and early Colonial Revival styles. Many of the plates presented only drawings proposed for various projects, but some of his designs had been constructed and were shown in photographs, such as the Queen Anne-Colonial Revival residence of Dr. Thomas M. Jordan, located on North Wilmington Street in Raleigh, and other houses in Raleigh, Tarboro, and elsewhere.

Between 1900 and 1909 Rose published numerous notices of his work in the Manufacturers’ Record, typically announcing that architect W. P. Rose of Raleigh had provided plans for various projects including houses, schools, and commercial buildings. In 1907-1909, the firm of Rose and Weston (probably W. P. Rose and Frank A. Weston) of Greensboro placed notices in the Record for projects in Greensboro, Winston-Salem, and Salisbury. During the first decade of the 20th century, Rose’s firm attracted promising young men as draftsmen and assistant architects to join him in the business. Both Harry P. S. Keller (Wilmington Star, May 20, 1904) and James Matthew Kennedy (Wilmington Dispatch, May 13, 1905, formerly employed by Henry E. Bonitz) moved from Wilmington to Raleigh to work with Rose, and later established their own respected practices. How much of the firm’s design work was by Rose himself and how much by his draftsmen and associates is unknown. In this period, when he focused on the role of architect, Rose was active in the North Carolina Architectural Association, of which he served as vice president in 1909. (The president was Joseph F. Leitner of Wilmington; Franklin Gordon of Charlotte was the secretary-treasurer, and other board members included Herbert W. Simpson, New Bern, and Willard G. Rogers of Charlotte.)

About this time, “just after the first decade” of the 20th century, the ambitious young man took his family west to seek his fortune in Oklahoma City, but they returned after a year to North Carolina, after finding the west a “lawless community” and being “well satisfied that North Carolina was the best state in the Union.” (The exact year of the western venture is not clear.) After 1910, it appears that he began to define himself more as a builder than an architect; the reasons for this transition are unknown.

In 1910 William P. Rose was listed as a contractor and a resident of Rocky Mount, North Carolina, head of a family that included his wife, Virginia, and children. According to a contemporary account, Rose established his contracting business in 1910 and quickly developed a solid reputation as a builder. His work was recognized for his fastidiousness and attention to detail. It was said that Rose was known for testing new house construction by walking into the center of a room and jumping up and down to see if the floor had the slightest quiver (he weighed between 250 and 280 pounds).

Between 1914 and 1931, his contracting business grew to be one of the largest in eastern and central North Carolina, securing many large commissions that amounted to as much as $25 million. Flourishing in a time of extensive public construction, his firm built numerous courthouses, hospitals, and schools, including buildings at the present University of North Carolina at Greensboro (UNCG) and present North Carolina State University (NCSU) in Raleigh. These were designed by a variety of architects active in the state. During the same period, there was an architectural firm active in Durham called Rose and Rose, consisting of Garland and James Rose, who designed many Durham buildings. No familial relationship between that firm’s principals and William P. Rose has been determined.

In Goldsboro, where he was residing in 1920 and established himself as a solid member of the community, the builder Rose was active in civic affairs, serving on the city council and in various local enterprises. He was associated with one of the town’s most memorable events, the midnight removal of the train tracks that ran down the center of the main street. After a long battle with the Atlantic Coastline Company to get the tracks removed, frustrated citizens decided to take matters into their own hands, and overnight the tracks mysteriously disappeared. According to an interview in the March 1, 1951, News-Argus, “Rose remember[ed] that the course of action taken by the irate citizens was his idea.” Rose said further, “That track should have been pulled up two more blocks and one more block on the south. . . . If I were a young man today, I think I’d see what I could do about that.”

In 1930 and 1931, Rose suffered substantial losses due to the Great Depression and the closing of the Peoples Bank of Goldsboro, of which he was a director. He secured a loan from his brother to start a building supply business in Goldsboro in 1932. W. P. Rose Supply Company, also known as Builders Supply Company of Goldsboro, operated for many years, and he continued to do occasional contracting as well. Rose also entered farming, owning one of the largest farms in Wayne County with over 1,500 acres of hay, beans, small grain and tobacco crops, as well as a huge gravel pit that supplied his brick-making operation. During his long career, Rose was architect or contractor for many, many projects. The building list focuses on works whose locations are known, and especially those still standing. Less is known about many other projects or plans cited in various sources including the Manufacturers’ Record, such as a hospital at Fort Bragg, Cumberland County; a building at the Caswell Training School near Kinston in Lenoir County; a hotel in 1901 in Smithfield, Johnston County; a structure at the Greensboro College for Women in Greensboro; houses for S. D. Wait and Mrs. J. R. Barkley in Raleigh in 1900; a city school in Goldsboro in 1901; a school in Haw River (MR 7/23/03); a bank in Hertford (MR 8/13/03); a dormitory by Rose and Weston of Greensboro at Wake Forest College (MR 9/19/07; a jail for Davidson County in Lexington (MR 6/11/08); a 14-room house in “colonial style” for Mr. Creelman of High Point (MR 11/19/08); a 5-story office building for the Southern Life Insurance Company in Fayetteville (MR 11/26/08); and numerous others.