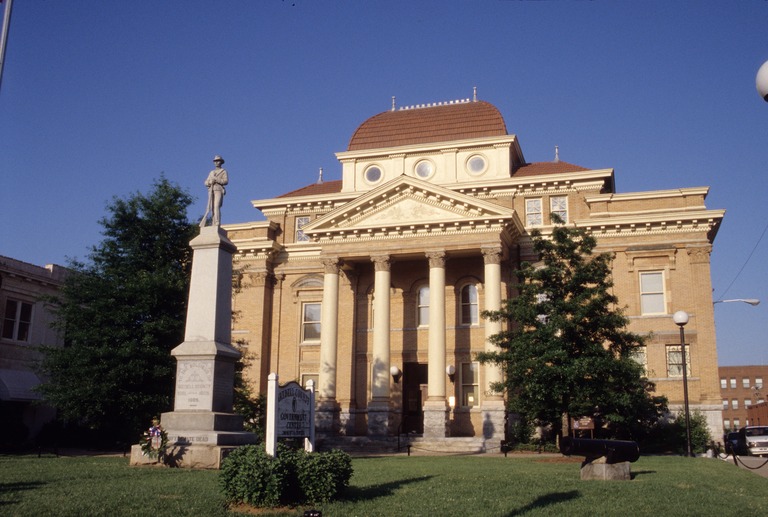 Louis E. Schwend (1875-Nov. 24, 1900) was an architect from Ohio who was briefly a member of the prolific architectural firm of Hayden, Wheeler, and Schwend. Although his career was brief, he is noteworthy for having planned the 1899 Iredell County Courthouse, which formed the popular prototype for a series of similar courthouse designs executed by the successor firms of Oliver Duke Wheeler and various partners.

Louis E. Schwend was born in Cincinnati, Ohio, the son of Max Schwend, a lithographer from Saxony, and Mary Schwend of New York. In 1880 the family including 5-year-old Louis was living in Cincinnati. Nothing is known of Louis’s early life or training or how he made the connection with Wheeler’s firm. In 1899 when architects Oliver D. Wheeler and Luke Hayden moved their office from Atlanta to Charlotte, they took young Schwend as partner. By 1900 the United States Census listed him as an architect boarding in Wheeler’s household in Charlotte.

As explained by Robert M. Topkins and Joe A. Mobley, in 1899 Iredell County commissioners resolved to build a new courthouse and received proposals from the B. F. Smith Fire Proof Construction Company of Washington, DC, Frank Pierce Milburn, and—the winning firm—Hayden, Wheeler, and Schwend of Charlotte, with Louis E. Schwend representing the firm. First the sketches and then the reality of the courthouse gained praise in Statesville and Charlotte newspapers. They acclaimed its symmetrical, classical design, a departure from the asymmetrical and eclectic architecture that preceded it. The Charlotte Daily Observer asserted, “The design is quite a credit to young Mr. Schwend, who won it in hot competition.” The Statesville Mascot cited the “oft repeated assertion that we have the prettiest, and one of the most complete and best arranged court houses in the State.” Schwend probably planned others of the firm’s buildings during his tenure (see Oliver D. Wheeler building list).

But the talented young architect was not to fulfill his promise: he returned to Cincinnati where he died of heart disease on November 24, 1900, and was buried in the Spring Grove cemetery in that city in a lot owned by his grandmother, Adelheid Hessinger. His mark on North Carolina architecture continued long after his death, however, for Wheeler’s firms continued to design courthouses based on Schwend’s much-admired model in counties across the state.