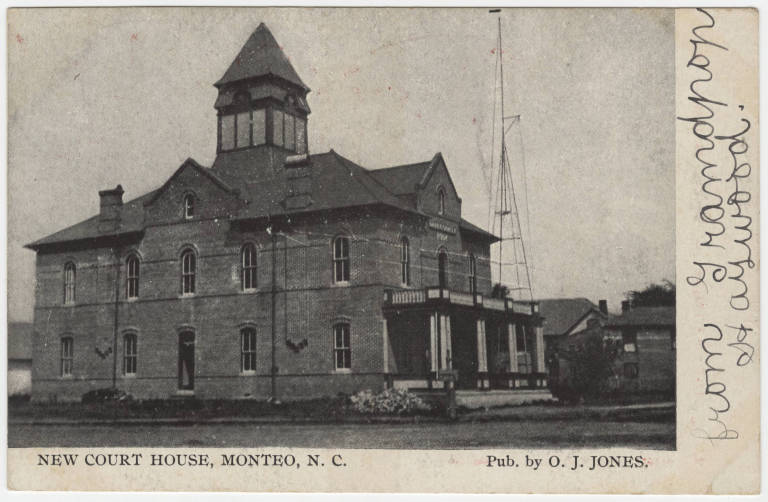 The B. F. Smith Fireproof Construction Company was established in Alexandria, Virginia in 1897. As noted in Margaret T. Baker’s Virginia’s Historic Courthouses (1995), its founder Bartholomew Smith named the firm to appeal to the widespread interest in having fireproof public buildings, especially county clerks’ and registers of deeds’ offices and courthouses. Loss of public records to fire was a serious and longstanding problem. Smith’s effective self-promotion combined with the economy and general adequacy of his buildings brought his company growing success in a period when many communities were building new civic facilities. With the business headquartered in Washington, D. C., Smith gained scores of commissions for building courthouses, clerks’ offices, and jails and installing vaults throughout Virginia and in neighboring states, including several in North Carolina. Many of the firm’s courthouses were of similar character, being unpretentious, rectilinear brick structures with modest and eclectic detailing that often included arched windows and corbeled brickwork detail in a simplified Romanesque Revival style—a contrast with the larger, more elaborate and costly Queen Anne and Neoclassical courthouse design favored by wealthier counties. As Baker notes, Smith sometimes served as “architect” for his projects as well as contractor.

According to architectural historian Carl Lounsbury, Smith was a Union veteran who appeared in Virginia court records ca. 1894-1896 as a representative of the St. Louis Art Metal Company before establishing his own firm. The Washington Times of September 7, 1897, reported that a charter had been granted to the B. F. Smith Fireproof Construction Company of Alexandria, Virginia, with a capital stock of $100,000 (or $300,000, not quite legible). It was a family business, with B. F. Smith as president, F. J. Smith as vice president, George G. Smith as secretary, and L. F., Hattie B., B. F., and George B. Smith, all of Washington, as directors.

The B. F. Smith firm’s buildings in North Carolina date from the late 1890s into the early 1910s, and most were in small county seat towns. Among the popular “fireproof” features—not unique to this firm, of course—were doors and windows framed in masonry, not wood, surrounds and extensive use of metal fittings, plus fireproof vaults.

Judging from articles in newspapers.com, some of the firm’s earliest projects were in northeastern North Carolina. It appears that B. F. Smith made forays into the region to stir up concern for fireproof buildings and thus raise interest in employing his newly chartered firm. In 1897, the Elizabeth City North Carolinian of December 15 carried an account by a writer who had recently made the acquaintance of Smith, president of the B. F. Smith Fireproof Construction Company, who reported that he had contracted to build the Currituck County Courthouse in the village of Currituck, and displayed the plans, which showed a “modern, up-to-date edifice.” (The courthouse was expanded in that year, incorporating an earlier building.) Smith, who had just completed “improvements” at the courthouses in Edenton and Hertford, and he stated that “at a small cost, he can remedy the defective acoustic condition of our Court House here” (in Elizabeth City). The county commissioners had the project “under consideration.”

In 1898, the Plymouth Roanoke Beacon of May 27 explained Washington County public officials’ perspective regarding the need for the Smith company’s services. Grand jurors had examined the offices of the county register of deeds and clerk of the superior court and reported to the superior court that “the Records of said offices would be unsafe in case of fire,” and the county needed a “fire-proof record building for the preservation and safe keeping of the public records, papers, documents, &c., of said county.” The county grand jury voted to build a fire-proof “record building” and to contract with the B. F. Smith Fireproof Construction Company for that purpose, for which the county would pay $4,000. Whether Smith or another member of the firm had visited Plymouth to encourage such a project is not known.

Between 1900 and 1902, the Manufacturers’ Record carried notices of nine Smith projects in North Carolina, including installation of jail cells and record vaults and record rooms in existing county buildings as well as construction of new fireproof county buildings such as the Alexander County Courthouse in Taylorsville (1900) and the Northampton County Clerk’s Office II in Jackson (1900). Newspapers carried accounts of such projects as the addition of two wings to hold fireproof vaults for the Edgecombe County Courthouse in Tarboro (Tarboro Southerner, September 28, 1899); fireproof vaults in the Lenoir County Courthouse in Kinston and a new Onslow County Courthouse in Jacksonville (Kinston Daily Free Press, April 30, 1904); the new Rockingham County Courthouse, reported in the Reidsville Webster’s Weekly of April 4, 1907, which mentioned that the Smith firm had installed fireproof vaults in the previous courthouse, which had burned recently; and the Robeson County Courthouse in Lumberton, for which Frank Pierce Milburn and the B. F. Smith Fireproof Construction Company were both identified as the architects on a tablet near the front door (The Robesonian, January 4, 1909). Milburn had served as architect for the Rockingham County courthouse and Smith as contractor.

Of the Smith company’s many buildings in North Carolina, several have been destroyed and others significantly altered. Especially intact and representative are the Tyrrell County Courthouse, the Rockingham County Courthouse, and a rare surviving example of the firm’s separate clerks’ offices in the state, the Northampton County Clerk’s Office II in Jackson, a brick structure that resembles a bungalow, located between the county’s antebellum clerk’s office and courthouse.

Little is documented of the firm’s day-to-day operations, but the company employed local and regional builders and artisans to manage some projects, such as Captain Price Furpless who managed the Onslow County Courthouse project (Kinston Daily Free Press, April 30, 1904) and carpenter T. F. Causey of Greensboro (Greensboro Patriot, May 13, 1908), who was assigned to the courthouse project in Lumberton.

It appears that sometimes the Smith firm stretched its resources too thin. In 1904, according to the Washington Morning Post of November 27, 1904, Ashe County, N. C., planned to bring suit against the company. It was stated that the “manager of the Washington concern” had signed a contract to build a new courthouse in Jefferson but was “in ignorance” that the town was 30 miles from the nearest railroad; as soon as he made the discovery he cancelled the contract. Because of the transportation problem, the cost of the courthouse would be $2,000 more than the original contract, and the county was bringing suit for that amount. Other counties brought suits because of problems with the Smith company’s courthouses, notably Dare County (News and Observer, November 18, 1908) and McDowell County (McDowell Democrat, June 17, 1909), the latter a complex case where the issues were described in detail during lengthy litigation.

Reports of the company’s activities continued to appear in newspaper accounts into the early 1910s. In 1913 the firm found itself in financial trouble, and 1914, the Washington Post of April 8 reported that three of the firm’s creditors submitted a “creditors’ petition” asking that the Smith company be “adjudged a bankrupt.” The factors, possibly including the lawsuits, leading to this situation are not entirely clear. What became of B. F. Smith and his associates after this remains to be learned. The name is so common as to make it difficult to track Smith in public records.

For a brief period, however, the company made a significant mark on the civic architecture of small communities in North Carolina and Virginia. In many cases, civic leaders were replacing old frame buildings, while others were rebuilding after fires destroyed earlier structures. Although many of the Smith vintage of utilitarian, affordable, fireproof buildings have been lost—supplanted by more pretentious and expensive public buildings in neoclassical modes and later modernist buildings, a few still serve as a reminder that B. F. Smith’s “fireproof” buildings enabled many rural counties to build economically and substantially at a key period in public architecture.