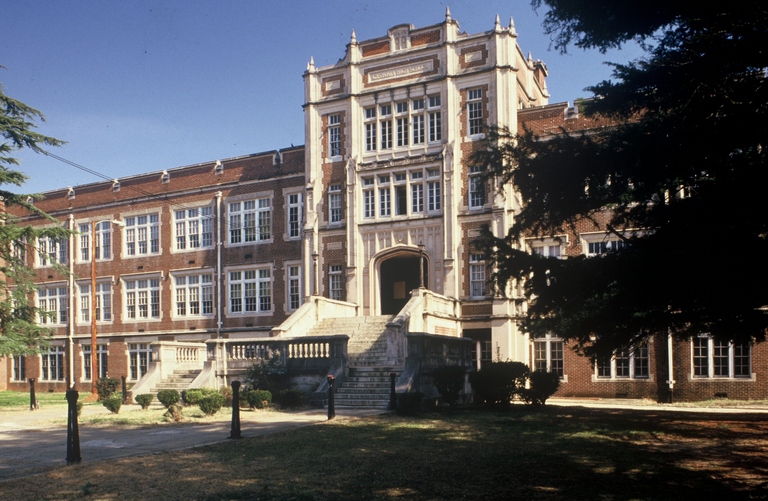 Hugh Edward White (June 27, 1869-June 25, 1939), a South Carolina-born architect, worked in various locations before moving about 1920 to the growing textile city of Gastonia, North Carolina, where he became the principal architect in his adopted community. Working in a mainstream Beaux-Arts tradition, he served an emerging clientele among the industrialists and other businessmen of the textile manufacturing region of the western Piedmont. With his partners in the firm of White, Streeter, and Chamberlain from 1921 through 1926 as well as on his own, between 1894 and 1939 White had nearly 300 documented projects in Gastonia and other North Carolina and South Carolina towns.

White was born in Fort Mill in York County, South Carolina, the only surviving son of Leonidas Spratt White and Dorcas Ann Culp White. He was named for his paternal great-grandfather Hugh White, who was part of a Scotch-Irish settlement group who came from Lancaster County, Pennsylvania, in the 18th century. After the deaths of their father in 1878 and their mother in 1885, Hugh and his two sisters Margaret Elizabeth and Alice Ann were raised by their aunt, Lizzie Culp, who came to live with them.

Like many architects of his and previous generations, White gained his architectural skills through experience and a correspondence course. A story in the Gastonia Daily Gazette in the 1930s related that White was raised on a farm and was educated at the Fort Mill Academy and through “a special correspondence course in architecture from a N. Y. school.” He began his working life “in a wood working plant as a carpenter and advanced to foreman. Later [he] became foreman for a contracting firm in York County, S. C. He took up architectural work in Rock Hill, Chester, Lancaster & Gastonia.” Thereafter he went to Atlanta, where he “worked as a draftsman in an architect’s office. [He] passed the civil service examinations and became inspector of public buildings for the government in many states.” From about 1894 to about 1902 or 1903, and again in 1907-1908, White practiced architecture in Rock Hill, South Carolina. He advertised in the local newspaper as “H. Edward White, Architect,” offering to furnish plans, specifications, and estimates for churches, public buildings, stores, and residences, and in 1908 he described himself as an “architect and civil engineer.” In Rock Hill, White planned at least twenty residences in Queen Anne and Colonial Revival modes plus a half-dozen commercial buildings, and he also took commissions in other South Carolina communities. For a brief period during the 1890s he worked in an architectural office in Atlanta; the name of the firm has not been ascertained.

From 1903 until 1918 White served as a field supervisor with the Office of the Supervising Architect, Department of the Treasury, the Federal department responsible for designing and constructing Federal buildings throughout the country. In this capacity he moved frequently to supervise projects including post offices in Virginia, Mississippi, and Georgia, as well in as Washington, Hickory, and Gastonia, North Carolina. From 1918 or 1919 into 1921, White worked for the firm of leading South Carolina architect Charles C. Wilson as a draftsman and construction supervisor. Through these experiences he gained a broad knowledge of national architectural styles and systems as well as an understanding of how to adapt these national models to a regional setting.

According to family tradition, Wilson sent White to Gastonia to supervise construction of the Renaissance Revival style Joseph Separk House (1919) for a textile executive. White and his family were residing in Gastonia by the time of the 1920 United States Census, and the 1921-1922 Gastonia city directory first listed Wilson’s architectural office in Gastonia, with Hugh White as manager of the office.

White recognized Gastonia’s promise as a thriving place where textile industrialists had the money and the will to sponsor architecture expressive of their own and their community’s rising stature. In the early years of the century, Gastonia leaders commissioned designs from various architects, including C. C. Hook, Louis H. Asbury, William Peeps, Daniel A. Tompkins and Stuart W. Cramer, all of Charlotte, Frank Pierce Milburn of Washington, D. C., and Charles C. Wilson of Columbia. Hugh White had a long acquaintance with the community, having designed the 1903 Dr. P. Ralph Falls House there, and having resided there while supervising construction of the United States Post Office in the mid-1910s. He evidently made sufficient connections with local leaders to encourage him to establish a firm in Gastonia.

It was not long after coming to town as head of Wilson’s office that White, a man just past his fiftieth birthday, decided to make a new start by forming his own architectural partnership and seeking the prize commission for the $500,000 Gastonia High School. His partners in the new firm had also worked in Wilson’s office and with the Office of the Supervising Architect of the Treasury: Charles J. Streeter and Carroll W. Chamberlain. Chamberlain, the only one of the partners with a formal architectural education, had a degree in architecture from Syracuse University and practiced in Syracuse before taking the Federal position, while Streeter worked in a New York architectural firm prior to his fifteen years’ service in the Office of the Supervising Architect of the Treasury.

Despite some interference from Wilson, the new firm of White, Streeter and Chamberlain won the high school commission and on the strength of that project inaugurated their office in downtown Gastonia. The imposing Tudor Revival High School, one of the finest in the state, established the firm’s reputation in Gastonia and the region; even before it was completed and opened in 1924, the partners attracted prestigious residential commissions such as the Samuel Pinckney Stowe House in the nearby textile town of Belmont. The firm secured virtually all the important projects in Gastonia and Gaston County, including educational, public, institutional, commercial, and residential work through the mid-1920s. For years theirs was the only architectural firm with a main office in Gastonia, though others including Charles Coker Wilson’s had branch offices there. Their office in Gastonia put them in the heart of a rapidly growing textile manufacturing region, and their clientele soon included industrial and business leaders in such manufacturing towns as Belmont, Kings Mountain, Mount Holly, and Shelby, and the smaller communities of Cherryville, Cramerton, Lowell, and McAdenville. As Hugh White’s son Hugh II recalled, during their partnership the trio generally divided responsibilities as follows: White, construction supervision and marketing, Streeter, working drawings, and Chamberlain, specifications. White, who remained in Gastonia through the 1930s, is best recalled in local memory.

The buildings White and his firm designed, as well as those he planned on his own, embodied the Beaux-Arts Classical, Colonial Revival, and Tudor Revival modes popular in America during the interwar period. Typical of the era, White and his firm brought to small cities and towns renditions of these modes suited to the needs and wishes of the local clientele. Their work comprised residences in myriad styles, including textile leaders’ Colonial Revival and Tudor Revival mansions and a few small Mediterranean Revival style dwellings. The York-Chester neighborhood, Gastonia’s premier early 20th century suburb, offers a showcase of their domestic designs. For educational buildings, the firm employed both the Tudor Revival style—as in their Gastonia High School—and the Neoclassical Revival style, as in White’s Consolidated High School for Rutherfordton and Spindale. Their religious buildings, too, were either classical in design, such as the Temple Emanuel Synagogue and the Tryon Presbyterian Church or Gothic Revival. The firm employed a predominantly classical vocabulary for such civic edifices as the Gastonia Municipal Building, and some commercial buildings including the Citizens National Bank in Gastonia. The firm also planned many less elaborate structures including stores and warehouses suited to the practical requirements of the clients and distinguished by well-placed stylish details.

Despite the firm’s success, their partnership lasted only through 1926, and by the end of that year Streeter and Chamberlain had left Gastonia. According to White family tradition, the breakup of the firm came about because a huge project they had undertaken—the Oasis Temple Building for Charlotte—was terminated by the client. The firm completed drawings for the immense, classically detailed edifice in 1926; bids for construction, opened in August, ran higher than anticipated; and the directors of the organization decided not to go forward. Apparently the firm, which had focused on the job for many months, went unpaid for much of the time they had invested in it.

After the dissolution of the firm, Hugh White practiced on his own in Gastonia, working out of his office in the Commercial National Bank building until 1930 and later out of an office in his home until his death in 1939. From 1927 until 1930, he served the same client group as before, planning houses and other buildings that continued the scale and character of the firm’s previous projects. These included some especially fine Tudor Revival residences, plus schools, religious buildings, and civic and health facilities. He also introduced new themes in the Art Deco-Moderne style Webb Theater and the Gastonia War Memorial, which combined a fortress-like central tower with arcaded porch.

For White as for most architects, commissions dropped off radically during the Great Depression, and he and his family experienced hard times along with millions of others. His records show only a few projects during the period 1931-1934. In 1931 he kept busy with another project, researching and publishing a detailed “Industrial and Farm Map of Gaston County, North Carolina” which he peddled throughout the county for cash or farmers’ fresh produce. As economic conditions improved, White reinvigorated his practice and moved his office from his home to the National Bank of Commerce in downtown Gastonia. Reflecting the still straitened economic situation, he designed many residences at a reduced scale compared to his earlier work and did several additions and renovations to existing buildings. To attract clients with restricted budgets, he featured in his promotional booklet of 1936 designs for modest dwellings in Tudor and Colonial Revival modes. He also planned at least one modernist residence, the Clarence A. Ross House. The late 1930s also brought important public commissions, several of which were funded at least in part by the Federal Emergency Administration of Public Works. Among these were the Gastonia Colored High School, the Gastonia Junior High School, the Consolidated High School for Rutherfordton and Spindale, and the Cramerton Gymnasium. During his last years White also planned buildings for the campus of the North Carolina Orthopaedic Hospital and designed the Gaston County Negro Hospital, both important landmarks of interwar Gastonia.

Hugh White died on June 25, 1939, just two days short of his seventieth birthday, leaving a city distinguished by the architecture he had created. The Gastonia Daily Gazette of June 26 reported that Gastonia and Gaston County had lost “one of their finest citizens” and noted, “Although not a native of Gaston County, Mr. White had become thoroughly acclimated and had become affiliated with every forward looking movement in the county.” White was buried in Hollywood Cemetery in Gastonia. His widow, Mary Green White, survived him until 1948. White’s son, Hugh Edward White (II) followed in his father’s profession. He had worked in his father’s office for a time during the 1930s and in 1940 he enrolled at the Georgia Institute of Technology to study architecture. He worked with Walter Hook Associates before establishing the firm of Freeman White Associates in Charlotte.