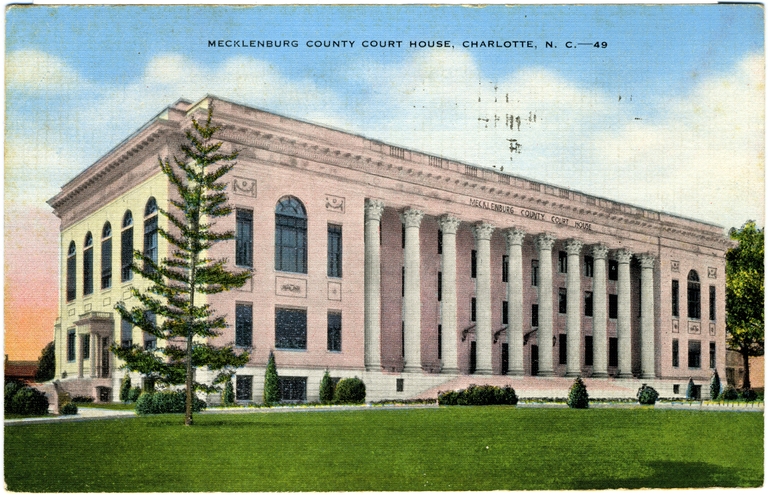 Louis H. (Humbert) Asbury, Sr. (October 15, 1877-March 19, 1975), a leading Charlotte architect, was the first professionally trained, fulltime architect in North Carolina who was born and practiced in the state. (See also Gaston Alonzo Edwards.) Asbury established a long-lived and prolific practice in Charlotte, with projects across much of the state, especially the Piedmont. His work encompassed most of his era’s popular styles but he was especially known for his quietly elegant works in the Colonial Revival, Tudor Revival, and Neoclassical Revival modes. Late in his career he worked in association with his son, Louis, Jr., and the firm produced several modernist designs.

The son of Charlotte building contractor S. J. Asbury and Martha Moody Asbury, as a youth Louis helped his father in his building business. He was graduated from Trinity College (later Duke University) in 1900 and then completed a special two-year course in architecture at Massachusetts Institute of Technology in 1903. He began work as a draftsman for the firm of Rossiter and Wright in New York City and then worked for Cram, Goodhue, and Ferguson, of Boston, where he remained until 1908 (see Ralph Adams Cram). During 1906 young Asbury and a friend bicycled across Europe to study architecture, including the Gothic churches of England, France, and Italy. In 1908 Asbury returned to Charlotte where he began his own architectural firm, one of numerous architects and builders ready to design and build for the fast growing New South city.

Asbury was an important early leader in the state’s architectural profession. The first native of North Carolina to be elected to the American Institute of Architects (September 28, 1908), he was endorsed for membership by his employer, Ralph Adams Cram, and two others in Boston and assigned to the AIA category of Chapter at Large, encompassing members “who live in isolated places.” As the sole AIA member in the state, he took a leading role in organizing the North Carolina chapter (see Glenn Brown), which was chartered in 1913. One of the group of five men who met in Greensboro to form the chapter on September 16, 1913, Asbury served as vice president of the new chapter, along with president Hill C. Linthicum and secretary-treasurer Willard C. Northup (see Northup and O’Brien). Asbury also served on the board of directors of the older North Carolina Architectural Association, which included mainly architects from Charlotte and Western North Carolina.

After North Carolina’s architectural licensing act was passed in 1915, Asbury was among the first men licensed to practice, receiving certificate #4 in the initial group of architects who were licensed based onpractice prior to 1915. (Only Will Armfield, Michael Heister, and Frank Pierce Milburn were listed before him.) An active member of the city’s civic and social life, Asbury served as a city councilman and a member of the board of adjustment and was a founder of Myers Park Methodist Church, for which he designed a Gothic Revival style church. This was one of many prestigious commissions for Asbury in his native city. On April 30, 1908, Asbury married May Crosby of Boston. Their son, Louis H. Asbury, Jr., attended Duke University and present North Carolina State University, joined his father’s practice shortly before World War II, and later practiced on his own. During his long career, Asbury influenced many other architects, including those who worked in his office such as Charlotte’s Jack Boyte and others.

Asbury was one of Charlotte’s, and North Carolina’s, leading architects in the 1910s and 1920s. Three of his buildings won honor awards from the North Carolina chapter of the AIA: the Mecklenburg County Courthouse in 1929, the first year the awards were given: Myers Park United Methodist Church in 1930, and St. Philip’s Episcopal Church in Brevard in 1931, the last year of the awards before the program was discontinued until after World War II. Typical of the architects of his day, Asbury’s practice encompassed many types of buildings from skyscrapers and major public edifices to moderate sized houses, commercial buildings, and gas stations. Schools, churches, and civic buildings constituted a substantial proportion of his work. He was accomplished in a range of revivalist styles in the Beaux-Arts tradition. For much of his career he typically employed neoclassical and “colonial” modes along with Tudor and Gothic Revival designs, though late in his career he adopted modernist styles as well. Although he designed buildings in whatever styles his clients preferred, his own preference was for the Gothic Revival, which he employed for several local churches, including the brick, auditorium plan Hawthorne Lane United Methodist Church (1915) and for his own congregation, the large, stone Myers Park United Methodist Church (1928).

Much of his work was concentrated in Charlotte, where he gained commissions for a wide range of buildings including some of Charlotte’s most important civic buildings and skyscrapers of the period. The Charlotte Observer commented, “As one of the city’s first professional architects, he helped design the town. His professional career spanned from . . . 1908 when Charlotte was a town of 25,000 people to the mid-1950’s when it had become a city of almost 200,000.” Although subsequent growth has destroyed some of his key works, many remain standing as a central part of the city’s early to mid-20th century legacy.

Especially important was Asbury’s role in defining the architectural character of downtown Charlotte at a time when the city was essentially rebuilding the busy and prestigious central zone around the crossing—called The Square—of Trade and Tryon Streets. In 1913 he designed a neoclassical façade for the Southern Loan and Savings Bank on South Tryon Street. In the early 1920s he designed the five-story Efird’s Department Store, one of the flagship department stores that made Charlotte a shopping mecca, as well as the eight-story Professional Building. He followed these with the Law Building (ca. 1926) and the Mayfair Manor Hotel (1929), and two of Charlotte’s chief landmarks—the city’s tallest skyscraper of its day, the First National Bank (1927) and the imposing, neoclassical Mecklenburg County Courthouse (1928).

Complementing Asbury’s downtown edifices were residences in the city’s growing suburbs, in which he employed both Colonial Revival and Tudor Revival styles. Asbury’s earliest works had been residential, such as the R. M. Miller, Jr., House (1908) near downtown. As Charlotteans moved outward into streetcar and automobile suburban developments, Asbury was one of several architects who designed the residences that lined the tree-shaded, curving streets. The E.R. Cannon House and F. W. Bradshaw House exemplify the Tudor Revival favored by several Charlotte clients and architects. Other residences display the foursquare form with deep porches and Colonial Revival or Craftsman details, as typified by the Bishop John Kilgo House, built for a Methodist bishop and educator as one of the first houses in the suburb called Chatham Estates, now Plaza-Midwood. Asbury also designed numerous residences in the exclusive Myers Park suburb. Among the largest was the Henry M. McAden House (1917-1918), built for the president of the First National Bank as an expansive and symmetrical stuccoed residence with clean lines, restrained classical details, and a tile roof. The elaborate garden was planned by Earle Sumner Draper, landscape designer for clients throughout Myers Park.

Like other architects of his day, Asbury found a regular source of commissions in the many public schools constructed during the state-wide school building campaign of the 1920s, when investment mounted in modern, consolidated schools. In Charlotte and Mecklenburg County, after the county authorized expenditure of a million dollars for new schools, in 1924 the county commissioned two educational experts, Drs. Strayer and Engelhardt of New York, to recommend sites for six schools and to serve as consulting architects. Asbury was the principal local architect, planning at least four of the six schools from the New Yorkers’ recommendations: Wilmore School, Seversville School, Morgan School, and Parks Hutchison School.

Beyond Charlotte, Asbury designed numerous buildings in the western Piedmont and foothills, including Concord, Morganton, Rutherfordton, and Salisbury. One of his largest and earliest major projects was the Stonewall Jackson Training School (1908-1940) near Concord, where he designed the major buildings in red brick with classical detailing. The Stonewall Jackson Training School Chapel (1913), however, was one of his early examples of his favored Gothic Revival style, in which he used local stone for the modest, picturesque building to complement the natural stone outcroppings of the setting.

In communities throughout the region, he planned neoclassical civic buildings, such as the Rutherford County Courthouse; residences in Colonial Revival and other styles for prominent industrialists and other wealthy clients; and schools large and small. One of his grandest residences outside Charlotte is Eastover (1934), a Tudor Revival country house outside Salisbury, rendered in Tudor Revival style. He also designed numerous churches in the region, including both urban and rural churches for various denominations and for black and white congregations. He planned several Lutheran and Reformed churches for congregations of German background in the western Piedmont, typically in the denomination’s preferred red brick, Gothic Revival style with bold white accents. In other cases he designed in local stone, such as St. Philip’s Episcopal Church (1927) in Brevard, the prize-winning building constructed in Norman Revival style by local stonemasons Fred Mills and the Wright Brothers.

In the 1930s, financial problems forced Asbury into bankruptcy, and he closed his office in 1935 and found work with the Federal Housing Authority in Asheville and Greensboro in 1935 and 1936. After this, he reopened his firm in Charlotte and brought his son, Louis Asbury Jr., into the business in 1939. During World War II he closed the office again and from 1942 to 1945 worked for the Army Post Engineers in Greensboro, then reopened his firm in 1945. During the post-World War II period, the firm of Louis H. Asbury and Associates produced a number of modernist designs, including the 9-story Doctors Building (1950) in Charlotte and residences in Charlotte suburbs. Asbury retired in 1956 and died in Charlotte on March 19, 1975. His funeral was held at the Myers Park Methodist Church, which he had designed. He was the last surviving member of the founders of the North Carolina Chapter of the AIA.

The collection of his papers at the University of North Carolina at Charlotte contains some 11,000 items including 300 sets of architectural drawings. The building list here is selective, highlighting some of his best known works and the stylistic and geographical range of his practice. For a complete list, see the finding guide for the Louis H. Asbury Papers, 1906-1975, Special Collections, J. Murrey Atkins Library, University of North Carolina at Charlotte, Charlotte, North Carolina. A thorough monograph on Asbury and his work is much needed.