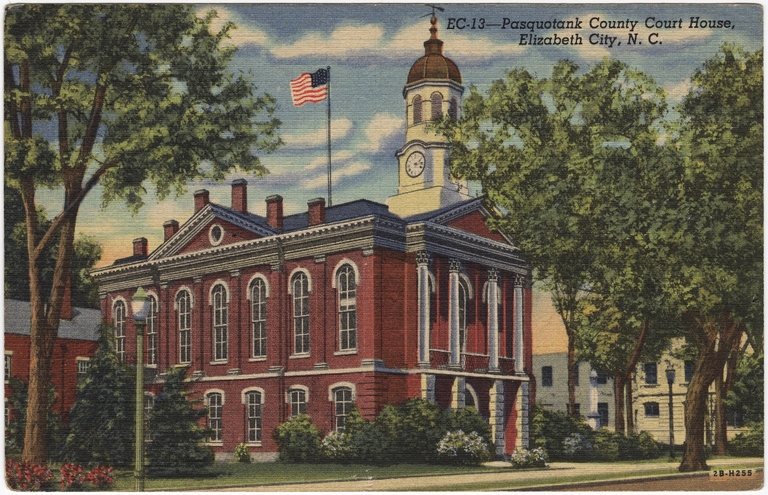 Daniel Steigerwalt Kramer (June 18, 1834-April 23, 1899), was a carpenter, builder, and manufacturer active in Elizabeth City in the late 19th century, and the father of Joseph Perry Kramer, a prolific builder and architect in Elizabeth City.

Daniel S. Kramer, who began his career as a carpenter in Pennsylvania, is described as having worked as a young man with his father and brothers in a family lumber business in Watsontown, Pennsylvania. According to Kramer family genealogy, he was the son of Jonathan Kramer and Anna M. Steigerwalt, both of whose families came from German origins. He married Rachel Krebs in Pennsylvania, and the couple had 11 children, several of whom died very young. He is evidently the Daniel S. Kramer of Pennsylvania who served in the Union army during the Civil War. In 1870, still in Pennsylvania, Kramer was identified as a carpenter by trade, owner of $1,000 worth of real estate and head of a household that included his wife, Rachel, and their four sons and two daughters.

Kramer moved with his family to Elizabeth City in 1871, where he and lumberman Charles H. Robinson (see Herbert W. Simpson) were among the northerners who led the industrial development of the community. A pioneer in the city’s lumber industry, Kramer established a sash and blind factory and a contracting business. His lumber mill opened in 1871 at the foot of present Burgess Street, and expanded rapidly. The firm had various names before it was liquidated in 1961: D. S. Kramer (1871-1884); D. S. Kramer & Sons (1884-1887); and Kramer Bros. Co. (1917-1961).His four sons joined him in the business: Charles Edmund (1857-1923), John Andrew (1859-1916), Allen Krebs (1861-1923), and Joseph Perry (1867-1924). In 1880, he built a large saw and planning mill on Poindexter Creek, and he and his sons continued to expand operations on this and other sites into the 20th century. A grandson recalled that the company shipped millwork and lumber to “build homes, stores, and churches in all the villages along the coast.” The mill produced large quantities of “beaded ceiling” as well as window frames, windows, balusters, mantels, and other items. (Photographs of the Kramer mills appear in Butchko, On the Shores of the Pasquotank.)

In 1880, despite his large manufacturing business, Kramer still identified himself to the census taker as a carpenter, and his sons were also listed as carpenters. Kramer’s stature as a builder was evidenced by his construction of the large, towered Pasquotank County Courthouse of 1882 from designs by Richmond architect Albert L. West. About 1890, Kramer turned the operation of the mills over to his sons and focused his efforts on his building business. At his death, he was lauded as “a prominent factor in the progress of the town.” Only a few of the buildings he constructed have been identified; it is likely that his firms supplied materials for and built many of the city’s late 19th century structures, including numerous Queen Anne style houses finished with ornate millwork—typified by his own house built in 1894 in Elizabeth City (Daniel S. Kramer House).

Daniel S. and Rachel Kramer were buried in the Episcopal cemetery in Elizabeth City, where their markers give their dates: Daniel S. Kramer, June 18, 1834-April 23, 1899, and Rachel, wife of D. S. Kramer, died April 2, 1883. After Rachel’s death, Kramer married again, to Eva Fulmer of Pennsylvania in 1884, and they had a daughter, Eva Marie, born in Elizabeth City in 1887. After Kramer’s death, his widow Eva applied for a pension for his service in the Union army.