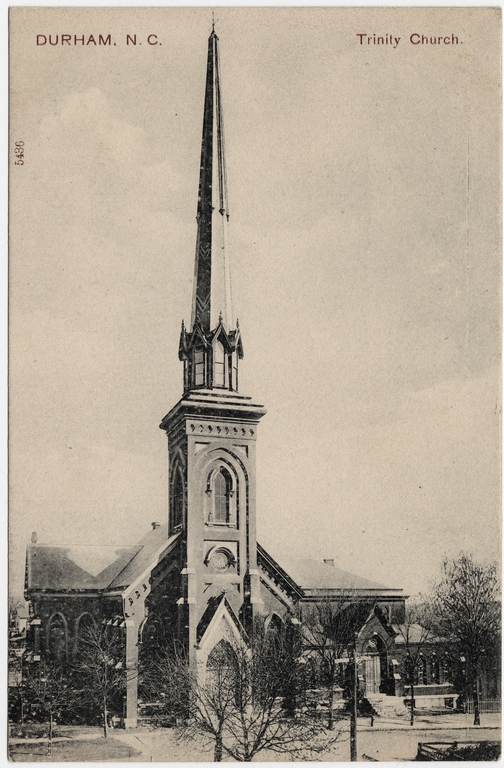 A. L. (Albert Lawrence) West (1825-1892), a Richmond, Virginia, architect, had a long and productive career that spanned the second half of the 19th century. Although most of his work was in Virginia, he also designed a number of North Carolina buildings, of which only the Pasquotank County Courthouse in Elizabeth City still stands.

West followed a typical 19th century path from artisan to architect. In 1850 he was working as a carpenter and builder in Richmond, and by 1858 was advertising as an “architect and measurer.” After serving as an engineer and architect for the Confederacy during the Civil War, he developed a professional practice that included many Methodist churches (he was a devout Methodist). He gained widespread attention for his architectural treatise, The Architect and Builder’s Vade-Mecum and Book of Reference (1871), a practical volume that included a guide to measuring and pricing, a glossary, and other information useful to the architect. His definition of an “architect” encapsulated that of his and earlier eras: “One who designs and superintends the erection of buildings.” He was a member and a fellow of the American Institute of Architects (FAIA) late in his life, the first native Virginian so honored.

The Pasquotank County Courthouse (1882-1883) in Elizabeth City was constructed by leading local contractor Daniel S. Kramer. The red brick edifice, which combines Italianate and neoclassical elements, follows a general format familiar since the Renaissance and shows similarities to a courthouse design published in Asher Benjamin’s American Builder’s Companion. The first story is treated as a basement, with the Corinthian portico dramatizing the main, second story which is treated as a piano nobile and contains the courtroom. As a port town in northeastern North Carolina, Elizabeth City had strong connections northward, as evidenced by the selection of a Virginia architect and the journey of the building committee chairman to Baltimore to acquire stone facings for the doors and windows. As noted by Thomas Butchko in On the Shores of the Pasquotank, the local Economist of August 9, 1881, complained about the high fee of $500 paid to “the architect who furnished the design for the new Court House.” The building was completed at a cost of $25,000.

West’s other North Carolina buildings were all churches, most of them Methodist, and all built of red brick in Gothic Revival style with prominent spires. Especially imposing was Trinity Methodist Church, which was built in Durham in 1883-1884, an elegant and symmetrically composed edifice featuring a central entrance tower topped by a soaring spire that was said to be the tallest structure in the city. Centenary Methodist Church (1886) in Winston-Salem featured a corner tower that emphasizes its location at the corner of Liberty and 6th streets in Winston. Edenton Street Methodist Church (1881) in Raleigh, which was probably his work, also featured a tall spire in a form similar to the Durham church. Since he was working in a period of extensive Methodist church building in North Carolina, it is possible that West designed other Methodist churches in the state that have not yet been identified as his work.

West’s professional reputation was such that in 1891, when the tower collapsed at the Benjamin Duke Building at the Methodist-affiliated Trinity College (present Duke University) in Durham, West was called in to assess the problem and establish liability for the failure. (See William J. Hicks, Samuel Linton Leary, and Charles N. Norton; and see discussion and photograph in Architects and Builders in North Carolina.) West is also credited with two undated residences in Henderson, North Carolina, for T. M. Pittman and Charles E. Stainback, but these have not been further identified.

Albert West’s son, William C. West (1870-1950), entered practice with his father in 1892 and after the elder West’s death continued in the profession in the successor firm, which he advertised in a 1900 flyer entitled “William C. West, successor to Albert L. West, F. A. I. A.”