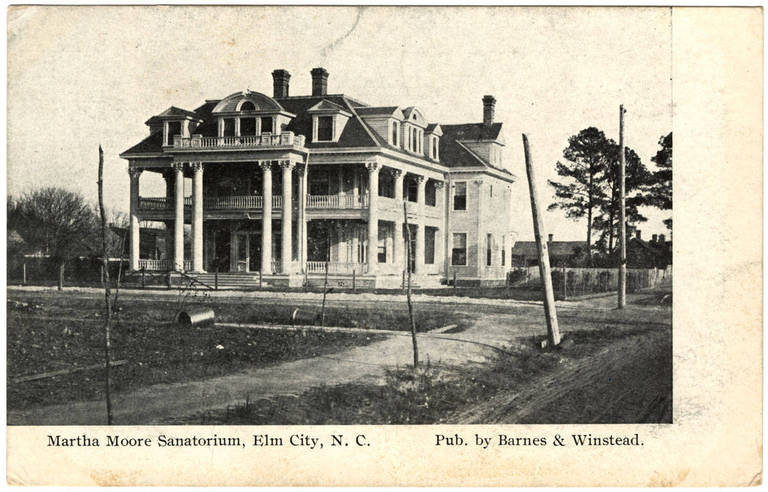 John C. (Christie) Stout (December 19, 1860-November 24, 1921), a contractor and architect from Randolph County, worked briefly in Wilmington, then moved to Wilson and to Rocky Mount. He had a large practice that extended throughout much of eastern North Carolina and concentrated in the railroad towns of the inner coastal plain. Like other practitioners in the region, he worked for a time in the Queen Anne style, but, especially after 1900, he began to incorporate neoclassical elements. Among his specialties were powerfully composed residences with grand porticoes, which suited his clients’ taste for the “Southern Colonial” style and became landmarks of their communities.

Stout was the son of Peter and Mary (Wrightsman) Stout of Randolph County. He was educated in the public schools and is said to have displayed a talent for architecture even in his youth. He trained as an architect and builder for three years in the office of Thomas A. Kluttz, a builder active in Asheboro, Fayetteville, and elsewhere, who worked at one time with Knoxville architect George F. Barber. In the 1880s Stout married Hattie Cornelia Jordan in Fayetteville, and the couple moved to the busy port city of Wilmington, where he established a practice.

By May 1891, Stout gained attention in the Wilmington Messenger for his work as contractor of the city’s YMCA. In 1897 Stout entered into a partnership with Thad F. Tyler, “under the firm name of Stout & Tyler, to carry on the business of contractors and builders” at 17 South Water Street. The announcement of the partnership in the Wilmington Dispatch asserted, “They are both experienced architects.” The partnership was short-lived, however, and by 1899 the two men were practicing separately. In November 1899 Stout advertised that he had “recently made arrangements with one of the best architects in the south, by which no charge is made for plans and specifications, where I am awarded the contract.” (This architect has not yet been identified.)

In September 1899 Stout gained a major commission that spurred his move from Wilmington to the central coastal plain. He became the contractor for the Atlantic Coast Line Relief Hospital in Rocky Mount. (The ACL was a major presence in Wilmington and its route led northward through the coastal plain.) After completion of this project in May 1900 he received many other commissions in the Rocky Mount area, and in 1900 he and Hattie were residing in Rocky Mount. He found abundant opportunity in the small market towns along the railroad lines, where tobacco manufacturing and sales along with textile manufacturing complemented local agricultural production and brought new people and wealth. In 1904, Stout bought a lot in Wilson, where he built his own home, a classically detailed cottage. He is credited with the design or construction of several residences in Wilson, as well as an annex to the Wilson Sanitorium.

By 1906, however, Stout had moved back to Rocky Mount, where he devoted himself exclusively to architecture. He was associated briefly (ca. 1908) with the prolific Wilson architect Charles Collins Benton. In 1910, Stout, listed as an architect, and his wife Hattie were still living in Rocky Mount, heading a household that included many young men living there as lodgers and working as clerks and dispatchers in local firms.

Stout distinguished himself as a master of the Southern Colonial Revival style that suited the prosperous industrialists and other businessmen of the coastal plain. In 1906, the Rocky Mount Record published a feature story about Stout and his work, and another story followed in the 1912 Rocky Mount Record, which noted, “He has made plans and contracted for some of the city’s handsomest residences.” In Rocky Mount and nearby communities he designed some of the area’s grandest examples of the Southern Colonial style. Notable among these was the massive, columned T. J. Hackney House, a grandiose, columned mansion that was a showplace of Rocky Mount; the grandiose Elm City School in the small town of Elm City; and the Bartholomew House in the small community of Castalia. He planned other opulent residences on Rocky Mount’s prestigious residential avenues of Church Street, Falls Road, Western Avenue, and Sunset Avenue, most of which have been lost.

Stout also designed in other classicially inspired styles, and built civic, religious, and commercial buildings in several communities. He used variations on the Neoclassical and Colonial Revival styles in such notable buildings as the First National Bank, the Rocky Mount Municipal Building, and the Phillips Building. In 1907, he submitted plans for the Robeson County Courthouse in Lumberton, but the large firm of Milburn, Heister, and Company won the commission. Stout’s practice culminated with his design of the Nash County Courthouse in Nashville, completed in 1921, The red brick courthouse with restrained detailing is a rare example of the Federal style revival in a courthouse of the period, when most such edifices followed the Beaux-Arts classical mode. A biographical sketch of Stout, published shortly before his death in 1921, stated, “Mr. Stout has proved a thorough master of his craft and has made an enviable reputation for himself as an architect.”

John C. Stout was one of the first licensed architects in North Carolina. His license certificate, issued in 1915, was #37 in the registration book of the North Carolina Board of Architecture, one of the early group of men who were licensed in the state based on their having been in professional practice prior to the licensing act of 1915.