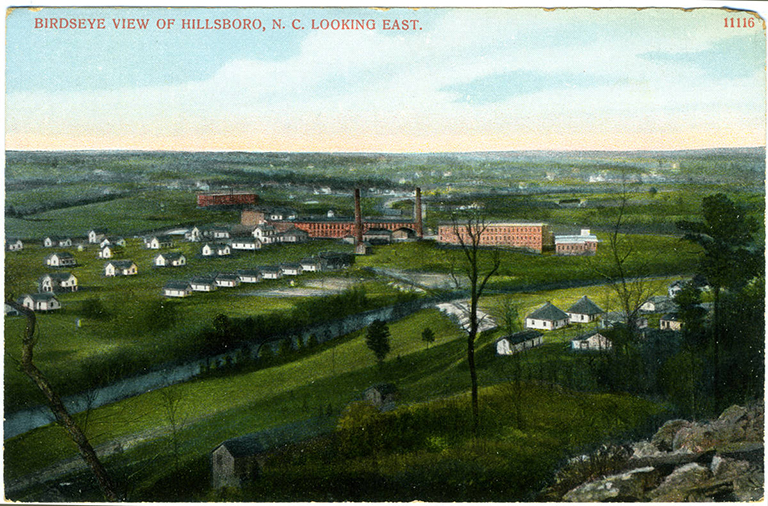 Richard C. Biberstein (1859-1931), an engineer and mill architect from Texas who settled in Charlotte in 1887, was one of the most prolific designers of textile mills in North Carolina and the South. The full extent of his work and the status of his buildings have not yet been determined. Extensive records of his and his son’s firms, including many drawings, are held at the University of North Carolina at Charlotte (see below).

Richard Biberstein was born in the German settlement of Fredricksburg, Texas, to German-born parents. His mother, Caroline, was from Hesse, and his father, Herman R. von Bieberstein (Biberstein by 1880), of Prussia, was a surveyor who went west in the mid-19th century and surveyed many of the Texas land lines that are still in use. Richard Biberstein studied mechanical engineering at the Worcester (Massachusetts) Polytechnic Institute from 1879 to 1882. He began his engineering career with the U. S. Electric Lighting Company of Newark, New Jersey, and the Atlas Engine Works in Indianapolis. He and his wife, Laura Eisfeld of Fredricksburg (a native of Germany), had at least four children.

According to family accounts, during a trip through the South, Biberstein made contact with Charlotte industrialist John Wilkes, and in 1887 began work as a draftsman and designer in Wilkes’s Mecklenburg Iron Works. According to William Huffman, “The story is told that one day a man came into the Iron Works and asked Biberstein where Col. Wilkes was. When he replied, ‘He’s over there,’ the man asked him to repeat it, and Biberstein had to shout directions, for which the man was obliged. When he was subsequently introduced, the stranger turned out to be Thomas A. Edison, who came to Charlotte to try and perfect his gold-separation process by means of electricity.”

After about ten years with Wilkes, who had made a regional reputation as a manufacturer of gold production machinery and was venturing into textile mill equipment, in 1897 Biberstein moved to the Charlotte Machine Company, operated by H. S. Chadwick, which specialized in mill machinery. The move was a wise one, for the Piedmont South was in the midst of its great mill-building campaign; in the decade 1900-1910 North Carolina added more than 1.8 million textile spindles, an increase of some 120 percent in one decade. Charlotte, centrally located near the border of North and South Carolina, flourished as the business center for the region’s textile industry: not only did Charlotte have several large textile mills, but the city became the home of the financial institutions and the equipment manufacturers that supported and grew with the rise in manufacturing region-wide. Charlotte was also home to some of the South’s premier mill designers including Biberstein, Stuart W. Cramer, Daniel A. Tompkins, and others.

In 1902 Biberstein took a position with Cramer, the Charlotte inventor, mill architect and builder (best known for developing and naming industrial “air conditioning”). By 1905 Biberstein went into business for himself as a mill architect and engineer with offices in downtown Charlotte, in the Piedmont Building on Tryon Street. In the late 1910s, his son Herman V. Biberstein (1893-1966) joined him, and after Richard’s death in 1931, took over the firm.

Richard Biberstein was a highly productive mill architect who designed dozens and perhaps hundreds of mills and mill additions. Records indicate that he was project captain for at least two dozen mills before he began his own firm, including facilities in South Carolina, Georgia, and Virginia, and also including the Lexington Cotton Mill in Lexington, North Carolina (1901). After he established his own firm, he (and his son) planned scores of projects in the 1900s, 1910s, and 1920s, including many in North Carolina. By 1910 he identified himself as an architect, and by 1920 both he and his son Herman (who was still living at home) were so listed in the census.

In North Carolina, Biberstein’s clients included many of the leading textile companies of his era. A frequent client was the Tanner family of Charlotte, for whom Biberstein planned Spencer Mills and Spindale Mills in Spindale, and the Cleghorn Mills in nearby Rutherfordton in the 1910s. Charles W. Johnston of Charlotte had Biberstein design or refit several of the “Johnston Group” mills during the 1920s, including facilities in North Charlotte, Huntersville, and Kings Mountain. In Gaston County, the Stowe family and their allied interests called on Biberstein frequently. His dozens of projects in Gaston County included the Chronicle Mills, Eagle, Stowe Family Mills, Belmont Processing, Hatch Hosier, Linford, Ragan, Melville, Morrowebb, and Dunn mills. In addition, he planned Imperial Yarn Mill, and National mills in Belmont and the Hudson and Dixon mills also in Gaston County. He also planned the Boger and Crawford Mill in Lincoln County, the Union Cotton Mill in Mount Holly, and the Mooresville Cotton Mill in Mooresville. In Rockingham in Richmond County, he worked on most of the principal mills, including the Hannah Pickett, PeeDee, and Roberdel Mills, which have been lost. Farther from Charlotte, he planned the Bellevue Mill at Hillsborough, North Carolina.

After Richard’s death in 1931, the firm continued as Biberstein, Bowles, Meacham, and Reid. The firm provided new designs and remodeling suggestions to early clients as well as attracting hundreds of new commissions for industrial buildings and a few schools in North and South Carolina, Virginia, Tennessee, Georgia, Texas, New Jersey, and Illinois, including work at present North Carolina State University.

The Building List for Richard C. Biberstein includes building entries only for the works for which some location and status information has been obtained. The list of his projects is too extensive to cite them all here, nor is there reliable information on most of their conditions and status. For a complete job list, see the Biberstein, Bowles, Meacham and Reid Records, 1895-1960, Special Collections, J. Murrey Atkins Library, University of North Carolina at Charlotte. For many items in his job list, the date of the project indicates an addition to an existing mill; many mills continued to expand and change over the years. The majority of the records in the collection date from after Richard Biberstein’s death, when the firm was operated by his son and successors.

With the ongoing destruction of scores of industrial complexes, especially textile mills, in the late 20th and early 21st centuries, the status of most of Biberstein’s work is unknown. We especially welcome updated information about his projects and their status. The Bibersteins—Richard and Herman and their firms—are of major importance to industrial development in North Carolina and the South; their papers at the University of North Carolina at Charlotte can supply information for a much-needed study of their work.