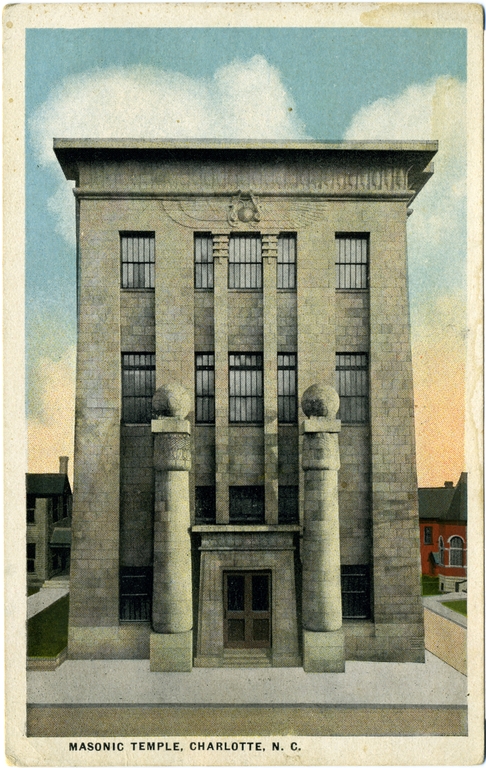 J. A. (James Addison) Jones (August 20, 1869-May 25, 1950) grew up on a farm in piedmont North Carolina, went to Charlotte in the late 1880s as a young bricklayer, and within a few years established his own building company, which rapidly expanded into a major regional, national, and internationally known construction firm that continued under his name for many years after his death. Although many of the architects involved in the building boom of the early 20th century are well known, reliable contractors such as J. A. Jones were a vital if less often recognized part of the story. As the building list indicates, his firm constructed some of the state’s best known buildings of the early 20th century. Among those that still stand are the Charlotte City Hall and Winston-Salem’s First Baptist Church, both large neoclassical edifices. He also designed such lost Charlotte landmarks as the Independence Building by Frank Pierce Milburn, famed as the state’s first steel framed skyscraper; the imposing Egyptian Revival style Masonic Temple, a major work by Charlotte architect Charles Christian Hook; and the much admired Selwyn Hotel, designed by Charlotte architect Franklin Gordon.

This entry covers Jones and his firm’s North Carolina projects during his lifetime but does not treat the J. A. Jones Construction Company’s work following his death. That topic is discussed in Smith and Kleuver, Jones Construction Centennial and elsewhere. The building list here for J. A. Jones encompasses only a selection of the firm’s best-known works from the founder’s lifetime, including those known to survive. Jones Construction Centennial (based in part on the memories of J. A. Jones’s son Edwin) includes a more extensive, partially illustrated list of the company’s projects, which can provide the basis for further research. The company also constructed buildings beyond North Carolina including Virginia, South Carolina, and Tennessee.

Biographies of Jones vary in their accounts of his early years. Most state that he went to Charlotte at age seventeen or eighteen in 1887 or 1888 to help a contractor named Cecil build the city’s first cotton mill. A descendant’s account identifies the contractor as David K. Cecil—see http://www.worthystyle.com/2014/02/james-addison-jones-i-early-married.html. Smith and Kluever state in their history of the J. A. Jones Company that Jones stopped off in Concord along the way, met Cecil there, and helped build an Episcopal church before going to Charlotte with Cecil. Jones reportedly began by helping make bricks, then became a mason’s helper, then a mason’s apprentice, and soon emerged as “the best and fastest mason on the job.” By 1889, it seems fairly certain, he was at work in Charlotte. According to Smith and Kluever, the J. A. Jones Company’s first estimator, Philo Caldwell, recalled that J. A. Jones once said to him, “You know, they say around that I walked to Charlotte barefooted. Well, that’s a lie. I had shoes on.”

Jones’s arrival in Charlotte brought him to a city booming with commercial and industrial growth and rising demand for bricklayers. He established himself as a man of excellent character as well as skills, energy and ambition. Among his first employers was the Southern Railway Company.

Jones married young, in 1890, to Mary Jane (Minnie) Hopper, with whom he had twelve children before Minnie’s death in 1914. Among their children were Edwin L. and Raymond A., who joined their father’s business in 1913 and 1916, respectively. Although J. A. Jones reportedly had only attended school up to the fourth or fifth grade, he had a head for figures and quickly learned how to read a blueprint and manage construction projects. Between 1890 and 1894 Jones became a general contractor and within several years was winning increasingly important contracts for commercial, governmental, and residential buildings in and around Charlotte. Little is known of his specific projects of the 1890s.

Jones’s projects of the first decades of the 20th century included some of Charlotte’s key industrial buildings of the period: the Cole Manufacturing Company; the Chadwick Manufacturing Company; and the Hoskins Mill. The Charlotte News of January 1, 1904, reported on four new mills near Charlotte, including the Chadwick Mills, already in operation, and the Hoskins Mill “now being completed.” It may have been Jones’s effectiveness in building mills quickly that helped boost his reputation and fortunes. Published construction dates of these vary, but they were built from about 1903 to 1905.

In the first two decades of the new century, J. A. Jones undertook major downtown buildings in the “Queen City,” which were designed by Charlotte’s leading architects of the day and set much of the tone for the new century. Capturing widespread fame was the Independence Building (1908-1909), designed by regional architect Frank Pierce Milburn as the first steel-framed skyscraper in the state. Other landmarks Jones built for Charlotte’s bustling downtown included the great Egyptian Revival Masonic Building and the Charlotte YMCA, both designed by C. C. Hook. Jones also built the flagship department stores that made the city a regional shopping mecca, nearly all of them now gone. He probably built the Belk Department Store by architects Wheeler, Galliher, and Stern. He is documented as builder of a 1914 Ivey’s Department Store, which is gone; it is not clear whether he also built the surviving Ivey’s Department Store, designed by William H. Peeps and built in 1924. Beyond Charlotte, Jones also gained the contracts for a few buildings at the University of North Carolina at Chapel Hill, including the Carnegie Library (present Hill Hall) of 1907, designed by Frank P. Milburn which is still standing.

In 1920, the J. A. Jones Construction Company became a corporation, with J. A. Jones, president and his sons Raymond A. and Edwin L. vice-president and secretary-treasurer, respectively. The company employed a number of other managers and supervisors. This team continued to build some of Charlotte’s and the state’s most impressive buildings during the 1920s, including several designed by prominent architects. Among the landmarks that still stand in Charlotte are the Charlotte City Hall, designed by Charles Christian Hook; the Carolina Theater, another design by Hook; and the Nebel Mill, designed by Richard C. Biberstein. As with the previous decades’ work, many of the firm’s notable works of the 1920s were demolished, including the Professional Building, designed by Louis H. Asbury; the Hotel Charlotte, designed by William Lee Stoddart; the Charlotte Observer Building of 1927; the Power Building of 1928; and the Wilder Building of 1926.

Beyond Charlotte, the company’s projects included two major buildings in Winston-Salem, which still stand: First Baptist Church (1924-1925), designed by the Nashville, Tennessee, firm of Dougherty and Gardner; and the Forsyth County Courthouse (probably the 1925-1926 remodeling by Northup and O’Brien of an earlier building by Frank Pierce Milburn).

An especially important undertaking was the J. A. Jones Company’s construction in the 1920s of some fifteen buildings at what is now the University of North Carolina at Greensboro, where the principal architect of the period was Harry Barton. (The building list here includes a selection of buildings at UNCG designed by Barton and likely built by Jones. The Jones Construction Centennial publication lists the gymnasium, seven dormitories, the auditorium, dining halls, the training school, an addition to the McIver Building, and the music building, all in the 1920s.)

In 1930, the Jones firm contracted for major projects in the Canal Zone, commissions that helped the company to weather the Great Depression, along with some public housing projects in the southeast. These projects gave the company experience in large government projects and overseas undertakings, which proved valuable in getting work during World War II and later.

During World War II, the J. A. Jones Company built nuclear facilities at Oak Ridge, Tennessee, plus other military and government facilities that required a large and highly efficient operation. According to Garland Stafford’s account, the Gaseous Diffusion Plant at Oak Ridge was “the largest construction project in the world up to that time.” The firm also constructed a shipyard and, after being surprised by the request to do so, began to build ships as well, launching 212 freighters in just two years. After the war, J. A. Jones, Inc., had contracts in several different countries and became one of the nation’s largest construction companies.

Following the deaths of J. A. Jones and his son Raymond in 1950, Edwin Jones was in charge of the growing company. It merged in 1979 with Germany’s Phillip Holzmann AG, one of the largest construction conglomerates in the world. As a result of financial problems with the Holzmann firm, it ceased operations in 2003.

James Addison Jones was active in community life as an alderman and city councilman for Charlotte, a donor and member of the board of trustees for several hospitals, and a leader in the Methodist church, first Tryon Street Methodist Church and later Dilworth Methodist Church. Despite—or perhaps because of—his own brief formal education, Jones’s philanthropies included Greensboro College and Brevard College, both Methodist affiliated, to which he gave library buildings that bear his name.

Thrice widowed, Jones lost his first wife in 1914. With his second wife, Emma Lockhart Renn, he had two children, and with his third wife, Maude Boren, he had one child. He married a fourth time, in 1942, to Rose Walsh, who survived him. A list of his children appears in Garland Stafford’s biographical account. Jones died at his home in Charlotte and was buried in Elmwood Cemetery.

Note: The Charlotte Observer of May 20, 1903 noted preparations underway for the Hoskins Mill and noted, “Mr. W. S. Jones, who superintended the construction of the Trust building, the Presbyterian College, and other large buildings, has charge of the work and says that after he gets things in working order his force will lay 50,000 brick a day.” W. S. Jones was identified in the Charlotte News, March 28, 1900 as a foreman for Nicholas Ittner, an Atlanta-based contractor, during construction of the Graded School in Charlotte. It is possible that W. S. Jones was related in some way to J. A. Jones; it is also possible that the reports gave incorrect first initials. Most accounts credit J. A. Jones with the Hoskins Mill.