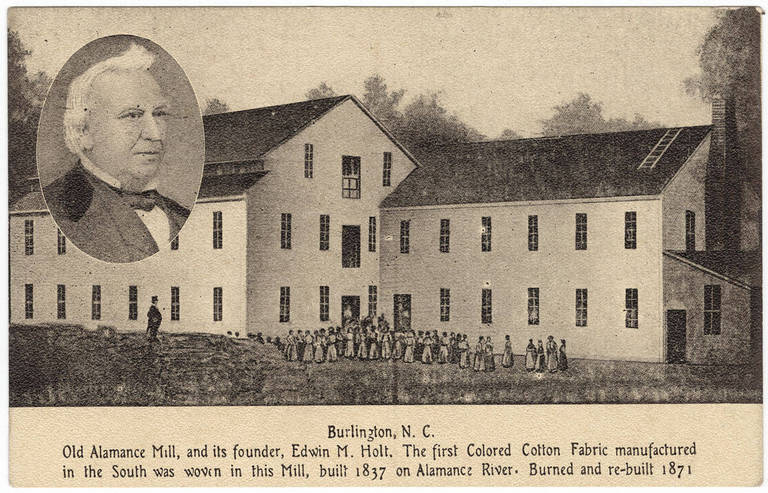 Berry Davidson (February 10, 1831-December 21, 1915), a millwright in the central Piedmont of North Carolina, left an unusually complete narrative of a career that extended from the 1840s until after 1900, a key period in the industrial development of the region. Depicting a rural millwright’s mobility, versatility, and adaptability, his account illuminates the career of an important type of artisan for whom such detailed histories are seldom found. He built and equipped saw mills, grist mills, and cotton mills mainly in Alamance County and Guilford County, centers of Quaker settlement and early industrial development, but his work also extended into Chatham, Cumberland, Harnett, Moore, and Randolph counties. He began with water-powered operations, chiefly on the Haw River and its tributaries, but from the 1850s onward he also built and operated steam-powered plants as that technology came into wider use.

Berry Davidson was born in Randolph County, the son of Moses Davidson and Susan (Susannah) Rose. Educated in the “common schools,” he gained his professional training through an apprenticeship with Solomon Dixon, a millwrightfrom an established Quaker family in Alamance County. In 1854 in Chatham County, Davidson married Mary Fletcher Wilson (ca. 1831-1870s) of Orange County; the couple had several children, including Mary, Sarah (Sallie), William, Miry, Nancy (Nannie), and Laura, all of whom were listed in their household in 1870. After Mary died in the 1870s, in 1880 Berry wed Emily Holt Newlin (b. 1847), and the couple had a daughter, Lilly, who died in infancy, and two sons, George C. and Dwight.

In Davidson’s personal narrative, of which a typescript has descended in the family, he tracked his long career year by year, project by project. He began by stating, “Berry Davidson commenced his apprenticeship at the millwright trade with Solomon Dixon on April 20, 1845, at 14 years of age, at Benbow’s mill on Cane Creek, now Alamance County, North Carolina.” Before that, he explained, as a boy from eight through eleven years of age, he attended local subscription and public schools for a few months in winter or summer, while spending most of his time plowing and assisting at (his father’s?) blacksmith shop.

During his two-year apprenticeship, Davidson worked with Dixon on various jobs. In 1845 the two moved to “Alamance Cotton Factory, E. M. Holt and W. H. Carrigan, proprietors,” where in July they installed in a new power plant. The cotton factory at Alamance, located on Big Alamance Creek, had been established by Holt and Carrigan in 1837. As the first textile mill of Alamance County textile pioneer and patriarch Edwin M. Holt, it was the foundation of a textile empire. (See Holt’s house, Locust Grove, designed by architect Alexander Jackson Davis.) Through this early connection with E. M. Holt, Davidson formed an important and long-lasting association with one of the state’s most important industrial families. Dixon and Davidson then proceeded to “Haw River new cotton mill, which we erected for driving power which was started going in January 1846.” This was probably the mill established at the community of Haw River by the Trollinger family in 1844. At this point, Davidson reported, his mentor Solomon Dixon withdrew from the trade, and Davidson went alone in 1846 to build a grist and saw mill for Joseph Bynum near Pittsboro. At the end of the year, his two-year apprenticeship was completed, and at age sixteen he was working on his own. Because his pay had gone to his master, he had neither funds nor tools, but his employer Bynum offered to buy him a set of tools. As it turned out, another friend, James Whitehead, supplied him with the tools for his trade. Early in 1847, Berry Davidson’s father died, leaving the young millwright “as my own guardian with a dependent mother to care for.”

From age sixteen onward, Davidson moved from project to project throughout the region, as he was “called” to various jobs by employers who knew him first-hand or by reputation. During the 1840s, he reported, he typically earned $1.25 per day. At intervals, especially when fever epidemics spread throughout a community or region, illnesses forced him to stop work, often for months at a time. In 1849, he established another important contact when he was employed by Judge Thomas Ruffin (chief justice of the North Carolina Supreme Court) to repair a mill on the Haw River. So pleased was the judge with Davidson’s work that he invited the millwright “never [to] pass his residence in the night-time nor pass at any time hungry.” A few years later, when Davidson encountered Judge Ruffin in Graham, the new county seat of Alamance County, Ruffin “expressed himself as highly pleased with my work, saying it was the first reasonable bill he had ever paid for his mill work.” Having retired from the court by this time, Ruffin told Davidson always to come to him if he needed legal counsel, for which he would not charge him; later Ruffin advised him on a legal problem and gave him a letter of introduction to former governor William A. Graham, who became his attorney.

During the 1850s, Davidson took on a variety of projects, chiefly sawmills, grist mills, and cotton mills. In some cases he built the mill and installed the equipment; in others, he only installed equipment or made updates or repairs. He took his younger brother under his wing as apprentice millwright, and the two worked together on several projects. In the early 1850s, he built a sash and sawmill for Alexander Mebane on Haw Creek; a corn grist mill for Henry Bason; a power plant for Abel Kelly’s blacksmith forge and a flour mill for Alexander Kelly, both in Moore County, and others. At about this time, through Alexander Kelly he was employed to build a frame Presbyterian church in Carthage, county seat of Moore County. In describing his work, Davidson commented, “The principal frame timbers were too long for any of the saw mills to cut and so large pine trees were hewn square, put up on scaffolds and sawn into scantling of various dimensions with whip saws worked by men on top and others underneath the timber.” He described the general situation concerning limitations of sawmills in the antebellum period; as a result, in many frame buildings of the period, the smaller lumber is circular or sash sawn at the sawmill, while the largest ones are hewn and pit sawn.

In the early 1850s, Davidson decided to supplement his trade with industrial investments. He joined with Dr. John McKoy in Fayetteville to “put up a steam circular saw mill to cut timber for the Cape Fear Navigation Company, which at that time was trying to navigate the Cape Fear and Deep River.” They built the mill in 1853. As explained by Carl R. Lounsbury in Architects and Builders in North Carolina, steam-powered circular saws greatly increased production capacity, but the investment in the equipment was worthwhile only where there was a wide market for the lumber produced. Although there were early 19th century steam saw mills in a few North Carolina communities such as Wilmington and New Bern, the 1850s brought much wider investment in these facilities, especially where river or rail traffic encouraged their construction. After a few years, in 1855, Davidson sold his interest in the Cape Fear sawmill and returned to his “old home section” in Alamance County, where he bought stock in the Snow Camp Foundry and Machine Shop and became superintendent of the plant for ten years. The shop manufactured “all kinds of heavy driving gear for cotton factories, flour and sawmills, threshing machines, feed cutters and mill fixtures generally.”

Still plying his trade as a millwright, Davidson continued to build and repair mills. During the Civil War, he recalled, the textile manufacturers of Alamance County “kept me detached to make mill supplies and repair their machinery” to keep up with wartime demands. In 1866, he sold his interest in the machine shop and bought a farm and mill on the Haw River near the community known as Altamahaw. But he was soon “called” again by local industrialists ready to expand after the war, including E. M. Holt, for whom he rebuilt a flour mill in 1868 and rebuilt the recently burned Alamance Cotton Mill at Alamance in 1871. He remembered of that project, “I commenced to frame the house on the 26th of June and began raising it on the 18th of July. I put in the machinery and on the 6th of December I started them to spinning.” More projects followed rapidly during the 1870s and 1880s, including substantial brick mills for E. M. Holt and for his sons L. Banks Holt and Lawrence Holt (Bellemont Cotton Mill), and son-in-law, James N. Williamson (Ossipee Cotton Mill).

In 1880 Davidson constructed another mill as an investor—the Altamahaw Cotton Mill for himself and John Q. Gant. That mill grew and continued operation for many years under the ownership of the Gant family. Seldom content to pursue a single thing for long, Davidson sold his interest in the Altamahaw Mill in 1884, and bought the Curtis Plaid Mill on Rock Creek in Guilford County. Shifting his attention to Gibsonville, a village on the North Carolina Railroad in Guilford County, in 1886 he built the steam-powered Minneola Cotton Mill there for himself and his nephew, Joseph A. Davidson. They moved the machinery from the Curtis mill to Minneola and began to weave plaids there on March 1, 1886. In 1887 Davidson built a family residence, the Berry Davidson House, in Gibsonville and moved his family there in December. In Gibsonville, Davidson became a leading citizen as well as a major industrialist. He sold his interest in Minneola to the Cone Export and Commission Company in 1892 and built another mill, called Hiawatha Cotton Mill, in the same community in 1893. “We began spinning there in June 1895.” Nine years later, he sold that mill to Lawrence S. Holt and Sons of Burlington “and retired.” After his retirement, however, he engineered the rebuilding of a flour mill for T. J. Lamb and did a few other small projects, including work on a flour mill owned by his son-in-law John B. Ogburn in Guilford County.

Davidson wrote his memoir when he was in his eighties. He reflected with satisfaction on a long life which he had begun in poverty and succeeded through hard work, determination, and honesty. “Looking back over the years, I am safe in saying, I never found a man that asked me to sign a written contract for the undertaking of any job, nor did I have an unsatisfactory settlement.” He died in Gibsonville only two months short of his eighty-fifth birthday and was buried in the Bethlehem Cemetery in Altamahaw. Among the children who survived him were Sallie (Mrs. O. L.) Huff (1856-1917); Nannie (Mrs. T. J.) Ogborn (1862-1931); Laura (Mrs. John B.) Ogborn (1866-1939); George C. (G. C.) Davidson (1883-1963); and Dwight Davidson (1886-1973). Several descendants of Berry Davidson remain in the area. Note: Archeological remains including portions of dams may survive for some of the mills that no longer stand.

The following building list comes in large part from Davidson’s own account. Information on the status and location of various cotton, grist, and saw mills has been provided by Max Way and Helen Walton of Alamance County based on available data. Further information is sought from those familiar with these sites.