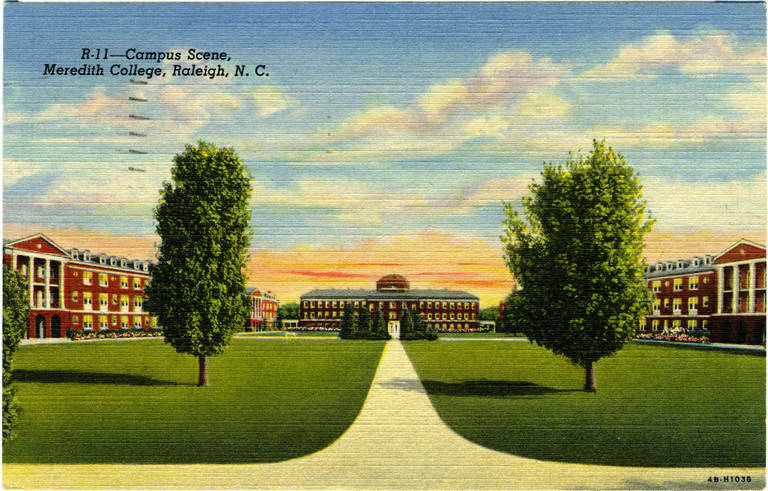 George Berryman (1883-1957) was a native of Virginia who practiced architecture in North Carolina during the early to mid- 20th century. He planned or helped to plan numerous educational facilities, with the original campus of Raleigh’s Meredith College [Meredith College Quadrangle and Development Plan] among his best-known projects.

A son of George and Martha Berryman, George Rue (Ruekirkzy) Berryman was born in Surry County, Virginia, and graduated in 1905 from George Washington University in Washington, D. C. As related in C. David Jackson and Charlotte V. Brown, History of the North Carolina Chapter of the American Institute of Architects, 1913-1998, Berryman worked for several architectural offices for almost fifteen years as a draftsman and superintendent of construction. He married Eugenia Barnett in Atlanta in 1910, whom he had met while superintending construction of a federal building in Dothan, Alabama, where Eugenia was living with her sister.

In about 1920 Berryman went into private practice in North Carolina and soon joined in practice with architect Charles C. Wilson and became a partner in 1923; in that same year, J. Robie Kennedy entered the firm, which operated as Wilson, Berryman, and Kennedy until 1927. A major project for the firm was the planning of the campus and the first six buildings, all in red brick Colonial Revival style, at Meredith College in Raleigh. The Baptist women’s college had operated for years in a large, Queen Anne style building in downtown Raleigh (see A. G. Bauer). In the early 1920s, these architects developed a plan for a spacious new campus in a then rural section west of Raleigh. Contractor for the first six buildings was J. E. Beaman.

In about 1926 Berryman established his own firm. He was active in the North Carolina Chapter of the American Institute of Architects, serving as vice president in 1926 and 1927 and as president in 1928 and 1929. He is pictured as part of the group of architects at the annual meeting of the chapter in Charlotte in January, 1929 (see Jackson and Brown, History).

During the Great Depression, Berryman like many architects closed his office. He worked for a time in a federal agency involved in construction of government installations. In 1946 he returned to Raleigh, became a member of the firm of Wilson, Berryman, and Kennedy, and in 1948 reinstated his membership in the AIA. Health problems forced his retirement in 1952, and he returned to Virginia, where he died in Richmond in 1957.

Berryman is credited with college buildings in Fayetteville, Greenville, and Raleigh, N. C. and in Gaffney, S. C., as well as schools in Wilson County and Tarboro, N. C., and the Wahl Coats School, a teacher training school on the campus of East Carolina University in Greenville. In 1929, the first year that the North Carolina Chapter of the AIA gave design awards, Berryman won an award for an “Ambulatory Building” in High Point, presumably a part of a local hospital.

Berryman, like many of his contemporaries, found work in public projects such as the Surry County Courthouse (1923) in Surry, Va.; the Third Street Elementary School in Greenville, N. C., and the United States Post Office (1932) in Mount Airy, N. C. In 1948, he was selected as architect for the Washington School Gymnasium in Raleigh (1000 Fayetteville St.) to improve opportunities at the high school for black students built in 1924 (see Christopher Gadsden Sayre).