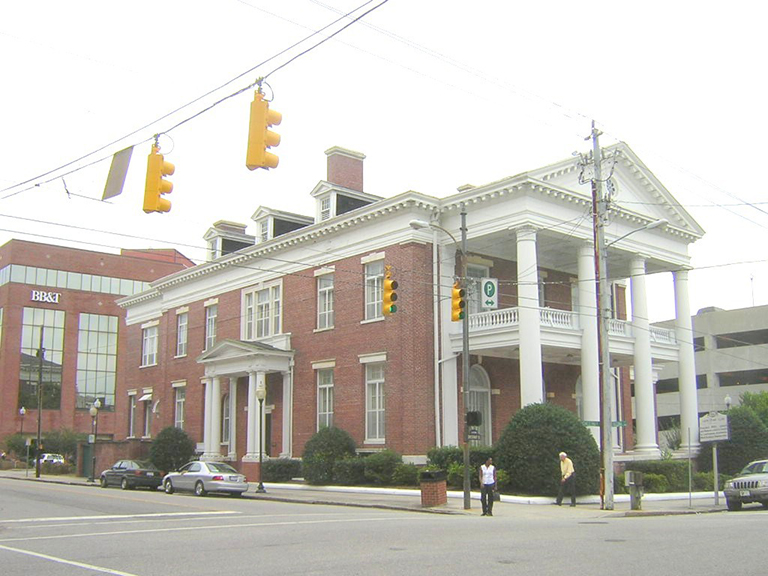 C. H. P. Gilbert (1861-1952) was a prominent New York architect trained at the École des Beaux Arts in Paris. He was the only child of merchant Loring Gilbert and Caroline C. Etchebery; this branch of the family had come from England and settled in the Boston area in the 17th century. C. H. P., as he was generally known, began his practice as an architect in New York in 1886 and designed some of the city’s most imposing residences including opulent mansions on Fifth Avenue as well as others on Long Island and in upstate New York. He was a member of several professional and social clubs indicative of his social position.

His only known work in North Carolina is the Cape Fear Club in Wilmington, a Beaux-Arts classical edifice for which he was the architect and Kenneth M. Murchison, Jr. of Wilmington and New York has been cited as the consulting architect. Leading Wilmingtonians had employed architects from New York to design their buildings from the mid-19th century onward. Some of Wilmington’s leading business and society figures, including members of the Cape Fear Club, maintained close ties with New York City, so it was not surprising that the club commissioned Gilbert to plan their clubhouse.

An article in the Wilmington Morning Star of December 15, 1912, announced that the contract for construction had been awarded to local contractors Wallace and Osterman, and C. P. H. Gilbert of New York had provided plans and specifications. The cost was not announced, “but, of course, the building will be a splendid one and in full keeping with the traditions and aspiration of the city’s oldest and most important social club.” It was to be three stories high, of “Colonial” design, with the main entrance having “Colonial pediments supported on columns.” It was expected to be completed by July 1, 1913, and to be “one of the notable achievements in city building during that year.” The Wilmington Dispatch of November 3, 1913, reported that the “magnificent” building was nearing completion and would soon be furnished with items from New York City. Construction had cost about $65,000. No expense had been spared in making “the new home for one of Wilmington’s most exclusive social clubs,” as “complete, convenient and comfortable” as possible. The article provided a detailed description of the building, from the “long, commodious verandas, with large white columns” to the billiard room and library. This account noted that the work was done by Wallace and Osterman, under the direction of J. S. Osterman.