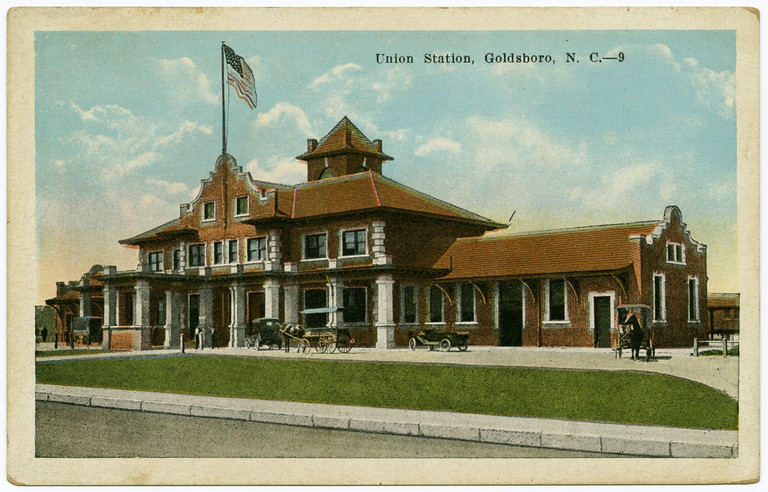 Joseph F. Leitner (June 13, 1871-June 2, 1930) was a mobile and prolific architect who began his career in Georgia, then worked in South and North Carolina, returned to Georgia, and ended his days in Florida. During a highly productive decade in Wilmington, North Carolina, first with his partner William J. Wilkins and then alone Leitner designed many substantial commercial buildings, residences, schools, industrial buildings, and railroad structures. Especially well known as a railroad architect, he served from 1909 through 1912 as official architect of the Atlantic Coast Line Railroad Company, for which he designed buildings in Wilmington, Rocky Mount, Fayetteville, and elsewhere.

A son of Major Henry Daniel Leitner and Annie E. Jackson of Augusta, Georgia, Leitner received his education at the Emory College School of Technology (now Georgia Tech). He began practicing architecture in 1893 with Albert Wheeler Todd, an established architect in Augusta, as Todd and Leitner. He soon formed his own practice, and from 1894 through 1900 he designed several buildings in Augusta and in South Carolina. In 1895 Leitner married Marie (Birdie) Zachary of Augusta.

In 1901, Leitner left Augusta for Columbia, South Carolina, where he worked in the office of architect Charles C. Wilson, a leading figure in the state’s architectural practice. As draftsman and later traveling representative for the prestigious firm, the young architect gained extensive knowledge and experience. After five years with Wilson, in 1906 Leitner formed a partnership with Florence, South Carolina contractor-architect William J. Wilkins. The two men developed a region-wide practice that extended into Georgia, Alabama, the Carolinas, Florida, and Tennessee. In 1906 they established an office in Wilmington, North Carolina, in the Southern Building. During 1906-1908 the firm designed buildings of diverse types in the port city, including commercial, religious, and residential structures. The partners also planned a number of railroad stations, including the 1907 Atlantic Coast Line station in Florence, South Carolina, an important commission for both men, and the large and handsome Goldsboro Union Station in Goldsboro, North Carolina, also in 1907. (Wilkins had previously designed a small depot in Chadbourn, North Carolina, in 1904.) These projects strengthened their expertise and reputation in designing railroad buildings.

Late in 1908 Leitner again established his own firm, staying in Wilmington while Wilkins continued on his own and with other partners until 1932, chiefly in South Carolina. In 1909, probably on the strength of the recent railroad structures, Leitner won an important appointment as official architect for the Atlantic Coast Line Railroad, a position he held through 1912. In this capacity, as the Wilmington Star reported on August 14, 1909, he had responsibility for planning all of the company’s facilities that cost $10,000 or more. His buildings appeared in Florida, the Carolinas, and elsewhere along the ACL’s north-south line. One of his best known buildings is the Union Station in Tampa, Florida. Like many of his contemporaries, Leitner worked in most popular styles of the day, including the Colonial Revival and various combinations of Romanesque, Flemish, and Italianate modes. Many of his buildings are of red brick with bold, contrasting classical details and curved “Flemish” gables.

In North Carolina, Leitner’s projects for the ACL included some of the most imposing railroad buildings in the eastern part of the state. In Rocky Mount, he designed the expansion of the Atlantic Coast Line Railroad Passenger Depot as well as the Ricks Hotel and the ACL’s Atlantic Coast Line Railroad YMCA, both large brick buildings near the depot. For the Atlantic Coast Line Railway Station in Fayetteville he employed an eclectic style with shaped gables and classical detailing similar to the earlier depot in Goldsboro. His largest undertaking in North Carolina was the immense complex of the Atlantic Coast Line in Wilmington, where the firm had its headquarters. This included the towering Union Station to serve the ACL and other lines and a large Atlantic Coast Line Office Building. The Wilmington Star of January 6, 1912, announced that the station and office building were expected to cost $300,000. Within a short time Leitner also planned a “mammoth cold storage plant” near the tracks. Farther afield, he designed the Winston-Salem Southbound Freight Depot for a recently established ACL affiliate line in Winston-Salem.

Doubtless because of his association with the ACL, Leitner gained the commission for one of Wilmington’s most prominent residences, the Colonial Revival style Thomas M. Emerson House (Emerson-Kenan House), built for the president of the company. The Wilmington Dispatch reported on August 6, 1910, “Mr. J.F. Leitner, the well known architect of Wilmington, has prepared plans for a very handsome residence which President T.M. Emerson, of the Atlantic Coast Line Railroad, contemplates erecting at Carolina Heights.” The drawings indicated that it would be a “pleasing brick residence” with “quite a large number of rooms,” and “one of the finest residences in Wilmington.” Leitner found favor with Wilmington leaders, for a series of substantial local projects ensued: the expansion of Tileston School, the Wiggins Building and the Wilmington Savings and Trust Building, all in 1910; the Atlantic Trust and Banking Building in 1911; the large and luxurious Hinton House, in a prime block of Market Street, in 1913; and the William Hooper School in 1914. He also served as the supervising architect of the prestigious Cape Fear Club in 1912, and in July of that year the club was exhibiting Leitner’s sketches of the building.

Leitner’s practice beyond Wilmington included such public and private projects as the Columbus County Courthouse (1914-1915) in Whiteville and a handsome Southern Colonial style residence, the R. E. L. Brown House, in nearby Chadbourn. In 1914 he designed the $80,000 Lumberton Hotel near the Robeson County Courthouse. He gained commissions for several schools, including three proposed in Fayetteville in 1911 and others later on in Charlotte. While in North Carolina, Leitner was active in the state’s architectural profession, serving twice as president of the North Carolina Architectural Association and as a member of the North Carolina Board of Architecture.

After a little more than a decade in Wilmington, Leitner continued his pattern of mobility. He opened an office in Atlanta in 1917 with architect C. P. Niederhauser, formerly active in Jacksonville, Florida. He moved to Atlanta and by 1919 joined the Atlanta firm of Edwards and Sayward (William Augustus Edwards and William J. Sayward), who had a lucrative regional practice. Evidently his architectural career in Atlanta did not prosper. In 1920 he was listed as secretary-treasurer of the Perfect Packing Company. He may be the architect by that name cited as being in Wheeling, West Virginia, in 1921. Drawn southward again, he was probably the architect named Leitner active in St. Petersburg, Florida, in the firms of Leitner and Henson (1926) and Brown and Leitner (1927). By 1930, Joseph F. Leitner and his wife, Birdie, were living in Tampa, Florida, where he identified himself as an architect specializing in bridges. He died June 2, 1930, and was buried in Harlem Memorial Cemetery in Harlem, Georgia, as was his wife, Birdie, who passed away in 1968.