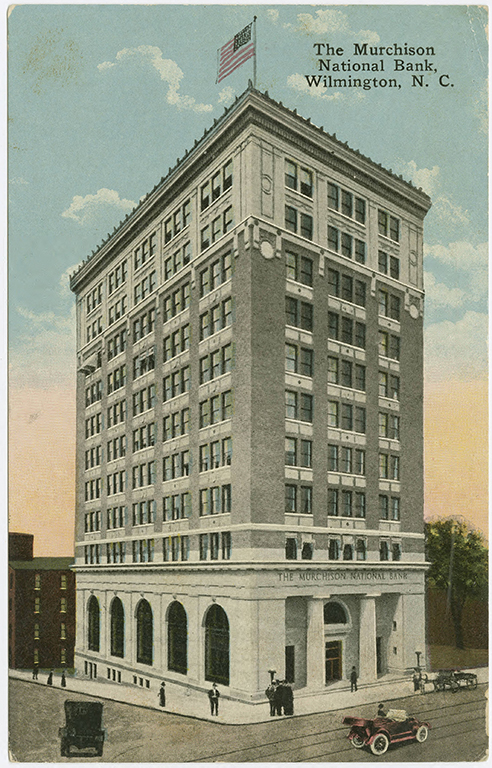 Kenneth M. Murchison, Jr. (September 29, 1872-December 15, 1938) was a socially prominent Beaux-Arts trained New York architect whose connections in Wilmington, North Carolina led to several notable commissions in and around that city, including the renovation of Orton Plantation House for his sister Luola and her husband James Sprunt. Murchison is best known for his extensive work in New York and elsewhere in the north and mid-Atlantic region. His architectural work in North Carolina is directly linked to his family history.

The Murchisons and the Sprunts were among the people of Scots background who figured among the mercantile leaders in Wilmington and the Cape Fear region. Although some accounts describe Kenneth McKenzie Murchison, Jr., as a native of Wilmington, records document his birthplace as New York. His passport application of November 27, 1917 notes that he was born in Brooklyn, New York, on September 29, 1872, to K. (Kenneth) M. Murchison, a native of North Carolina. Kenneth, Jr. noted that he himself had lived in Paris, France from 1897 to 1900; his current address was at 49 East 63rd St., New York; and his occupation was in architecture. (Some sources give his middle name as MacKenzie, but it was normally spelled McKenzie.) Kenneth was one of five surviving children of Kenneth McKenzie Murchison, Sr. (1831-1904) and Catherine (Kate) Elliott Williams (1836-1912).

Murchison, Sr., known as Col. Murchison, was a merchant, banker, businessman, and Confederate officer born in Cumberland County, North Carolina, to parents of Scots descent. Before the Civil War, he engaged in business in Wilmington and New York, and after the war he and his family moved to New York but usually spent winters in North Carolina. In 1880 Col. Murchison bought the old Orton Plantation on the Cape Fear River several miles from Wilmington, which he renovated as a hunting lodge. He was a founder of the Murchison National Bank in Wilmington and owner of the city’s Orton Hotel. In 1880 the census recorded him as head of a household in Brooklyn, New York; his and Kate’s older children, including their daughter Luola, were born in North Carolina, and the younger ones including Kenneth, Jr., were born in New York. Kenneth Jr. and his sibling spent many days from boyhood onward in the Wilmington area and maintained friendships and connections there.

The Wilmington connection was strengthened when Kenneth’s older sister, Luola Murchison (1860-1916) married James Sprunt (1846-1924) on November 27, 1883. The wedding took place in New York at the home of her parents (Raleigh Weekly State Chronicle, December 8, 1883). James Sprunt, like Col. Murchison, was one of Wilmington’s leading citizens—a Civil War veteran, cotton exporter, Cape Fear historian, philanthropist, and supporter of the Presbyterian church. A native of Glasgow, Scotland, he had come to Wilmington in the 1850s with his parents, Alexander and Jane Sprunt, who were preceded in North Carolina by Alexander’s brother, James Menzies Sprunt, a teacher and minister. Following the Civil War, James Sprunt and his brother William H. joined the successful cotton and naval stores export firm established by their father, Alexander.

After their marriage, James and Luola Sprunt made their home in Wilmington; in 1895 James acquired as their residence the antebellum home of Governor Edward Dudley, which he remodeled and supplied with a tall portico. (Some observers have suggested that Kenneth Murchison, Jr., designed the renovation, but this has not been documented.) Luola shared her husband’s interest in history and took a prominent role in historical and cultural organizations including the North Carolina Society of the Colonial Dames of America. After Luola’s father, Col. Murchison, died in 1904, James Sprunt purchased Orton Plantation from the estate as a gift to Luola. He encouraged her to remodel the antebellum plantation house, and her brother Kenneth planned the renovation of the house and added flanking wings in fine Beaux-Arts classical style. The Sprunts’ Orton became an icon of the southern “Colonial” style.

Except for his work at Orton for his sister and brother-in-law, Murchison’s projects in North Carolina were all in Wilmington. One of his most imposing designs was the Murchison Building (1913-1914) erected for the Murchison National Bank at the corner of Front and Chestnut Streets. As announced in the Wilmington Dispatch of October 31, 1913, the 10-story “sky-scraper” would be the tallest building in the city, with “magnificent” banking rooms on the ground floor and 9 floors above for offices exceeding (doubtless by intention) the 9-story Atlantic Trust and Banking Building (1910-1912, by architect Joseph F. Leitner). These two were the city’s only “skyscrapers” for many years. The Murchison National Bank had been organized in 1899 and named for founder Col. K. M. Murchison of New York. Whether the connection with his late father encouraged the younger Murchison’s selection for the commission is not known. The building was completed in 1914. The bank’s old headquarters across the street (1902, architect Charles McMillen) was to be occupied by the Home Savings Bank.

Murchison’s other Wilmington projects were associated with his sister Luola and her husband James Sprunt. In 1913,Murchison donated designs for the Marion Sprunt Annex, James Walker Memorial Hospital; the annex to accommodate women and children was proposed and substantially funded by the Sprunts in memory of their daughter, Marion, who had died young (Wilmington Morning Star, November 14, 1915). A few months after this gift was announced, Luola Murchison Sprunt died on February 17, 1916, following a year of failing health.

Kenneth Murchison continued to provide design services for projects associated with his brother-in-law James Sprunt. Especially prominent was the St. Andrews Presbyterian Church of the Covenant, which was funded by James and William H. Sprunt in memory of their parents, Alexander and Jane Dalziel Sprunt. The building was begun in 1916; the cornerstone was laid on January 6, 1917; and the large stone church was dedicated on March 3, 1918. The architects were K. M. Murchison of New York and Gause and Lynch as the local architects (Wilmington Morning Star, November 23, 1916, Wilmington Dispatch, March 4, 1918). Murchison also planned subsequent expansions of the church facility including a manse in 1919, funded by James Sprunt, and a Sunday school building, funded by Mrs. Jessie Kenan Wise.

Another major project was the Alexander Sprunt and Sons Building on Front Street, an imposing classical office building for the cotton trading firm established by James Sprunt’s father; the principal offices were occupied by the brothers James and William H. Sprunt (the “and sons”). The Wilmington Morning Star of February 11, 1921 cited Henry E. Bonitz of Wilmington as the local architect and Murchison of New York as consulting architect. The newspaper provided an admiring description of the brick, marble, and terra cotta building, which was to be “of Colonial type,” two stories tall; to cost about $75,000; and to have a frontage of 66 feet on Front Street and run back 78 along Walnut Street.

The Sprunt and Sons building may have been Murchison’s last major project in Wilmington. In 1920, he was one of several architects who submitted preliminary plans for a hotel to be built at the corner of Chestnut and N. 2nd Streets. A local newspaper article identified him as “Kenneth M. Murchison, of New York city, a Wilmingtonian who has gained prominence as an architect” (Wilmington Morning Star, Nov. 11, 1920). The project was delayed, however, and when the Cape Fear Hotel was finally erected in 1923-1915, the architect was G. Lloyd Preacher of Atlanta. With the death of James Sprunt in 1924, Kenneth Murchison lost one of his principal clients in North Carolina. For more than a decade, however, Murchison had provided some of the premier Beaux-Arts classical designs in and around Wilmington, most of which still stand.

Kenneth M. Murchison, Jr., is chiefly known as an architect of some prominence in New York. After graduating from Columbia University in 1894 and studying at the École des Beaux Arts in Paris from 1897 to 1900, he opened an architectural office in New York in 1902. He gained numerous prestigious commissions, including clubs, banks, apartment houses and major railroad stations in Scranton, Baltimore, and Havana as well as the Art Deco Apartment House in New York, which became his residence. On April 5, 1902, in New York City, he married Aurelie deMauriac, a daughter of Eugene and Susan Mauriac of New York, and the couple had two daughters, Katherine and Aurelie. During World War I Kenneth served as a captain in the United States Army Engineers.

Kenneth and Aurelie Murchison entered fully into New York society life. Kenneth served as president of the Society of Beaux Arts Architects and was an organizer of the society’s Beaux Arts Ball. Accounts of the Murchisons’ social life as well as Kenneth’s architectural work appeared frequently in New York newspapers and were widely reprinted. In 1929, several newspapers carried an account of a banquet of the Society of Beaux Arts Architects and the Architectural League at which Murchison was presented with a testimonial characterizing him as “fastest of all living draughtsmen; master of all musical instruments including the Matterhorn; actor of parts and how [sic]; playwright and producer; author, columnist and wise-cracker; architect and organizer; bon vivant boulevardier and man about everything” (Decatur Herald, January 13, 1927); Manitcowoc [Wisconsin] Herald-Times, May 29, 1929). He was also cited as vice president of the Central Savings Bank, the composer of a musical produced on Broadway, and a member of numerous clubs and organizations. He loved to plan events and celebrations. He introduced the idea of using historical themes for New York’s Beaux Arts Ball, a costume benefit ball and highlight of the social season held even during the Great Depression to benefit impoverished architects.

As reported in the New York Times of December 16, 1938, Kenneth Murchison, Jr., died suddenly on December 15 as he was emerging from the subway in Grand Central Station. The New York Times obituary (December 16, 1938) cited a few of his many railroad terminals, hotels, banks, apartment houses, and hospitals as well as his numerous organizations, clubs, and honors. The account highlighted that “Mr. Murchison was famous for his impersonations of George Washington. He bore an extraordinary resemblance to the first President in features and bearing, as shown by the Peale and Stuart portraits of Washington. He impersonated Washington in 1932 in New York’s bicentennial celebration of Washington’s birth.”

Murchison’s funeral was held on December 17 at the (Episcopal) Cathedral of the Incarnation in Garden City, New York, and he was buried in the Flushing cemetery in Queens (New York Times, December 18, 1938). The New York Beaux Arts Ball of 1939 was cancelled because of Murchison’s death (Waco News-Tribune, March 31, 1939). Through their daughters, Katherine Murchison Browning and Aurelie Murchison de Wardener, he and Aurelie had numerous descendants.