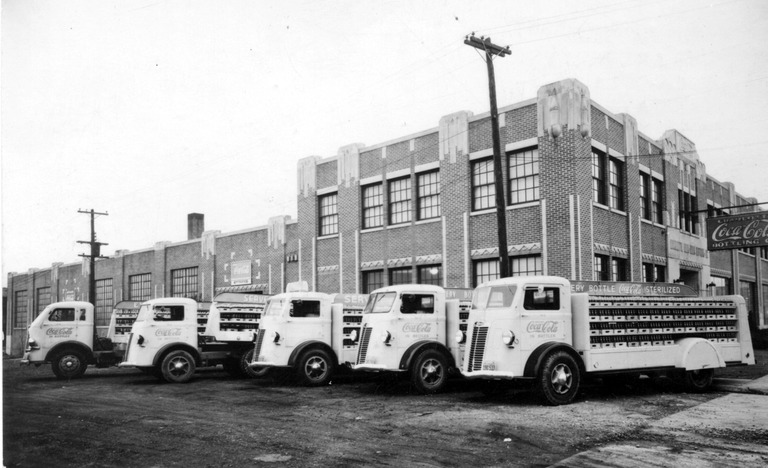 Marion R. (“Steve”) Marsh (October 21, 1893-September 4, 1977) was a versatile and long-lived architect and engineer active during Charlotte’s early to mid-20th century growth as an industrial and financial center. Between 1922 and his retirement in 1964, he designed several well-known Charlotte buildings, plus others in surrounding region of North and South Carolina. His work encompassed a wide range of styles and types from Tudor Revival residences to modernist office buildings, with Charlotte’s Art Deco style Coca-Cola Bottling Plant probably his best known project.

Born in Jacksonville, Florida Marsh attended college but learned his profession through correspondence courses and working with his brother W. M. Marsh’s architectural firm, Marsh and Saxlebye in Jacksonville. According to his partner in later years, Tebee Hawkins, Marsh was licensed as both an architect and an engineer. His obituary noted that he came to Charlotte in 1916 as chief draftsman for the architectural firm of James M. McMichael and later joined the chemical engineering firm of Peter Gilchrist as chief architect. In 1922, Marsh opened his own practice in Charlotte, where he spent his entire career except for a brief period during World War II.

Marsh like many of his fellow architects kept especially busy during the 1920s. In 1922 the local newspaper announced the impending construction of an apartment house “of modern design” he had planned for J. D. Stroupe on North Church Street between 7th and 8th Streets, one of several new apartment houses in the city (if it was built, it no longer stands). An important downtown landmark was his 1926 Builders Building, built at a key spot at 314 West Trade Street for developer Charles Lambeth as a seven-story downtown tower that served as headquarters for many of Charlotte’s contractors and other building professionals and tradesmen. His Charlotte Auditorium and Armory, which stood at Kings Drive and 7th Street, is remembered for its rapid completion, having been constructed in seventy-three working days to host the thirty-ninth national reunion of Confederate Veterans in 1929.

During the Great Depression Marsh along with others found work in publicly funded projects including schools. The Statesville Record and Landmark of June 20, 1935 noted that Marsh had been selected to plan school buildings for the county (Iredell County), “in the event the application for PWA government funds meets final approval.” He also gained commissions for private residences in Charlotte and elsewhere in the mid to late 1930s. Among his employees at this time was James A. Stenhouse, a recent graduate of Georgia Tech who would go on to become a prominent Charlotte architect.

In 1940, as the nation prepared for war, Marsh completed a National Defense census form for engineers and architects. He stated that his firm had a staff of four, but noted that a “quick, large, efficient organization can be had.” He listed among his recent commissions, dating from the 1930s, Fairview Homes, Concord High School, State Hospital Morganton, the Kannapolis Theater, Richmond County schools, the Coca-Cola bottling plant, and a residence for Charles Kistler in Morganton. He added a note on his practice: “Wide varied experience. Reputation for expediency and coordination. Can expedite plans for all kinds of buildings.”

During the war Marsh was stationed in New York and Washington with the War Production Board, serving as liaison architect for the construction division of the production board. He is also described as having designed the Morris Field Army Air Base (1941), which later became the site of the Charlotte airport.

In 1945 Marsh entered into partnership with Tebee Hawkins, native of Atlanta educated in architecture at Clemson University. During the postwar era Marsh along with his contemporaries adopted modernist styles, as illustrated in the main office of Mutual Savings and Loan, an International Style high-rise structure of blue and white glazed masonry completed in 1962 at 330 South Tryon Street in downtown Charlotte. Postwar projects also included school and hospital work, churches and residences, and bottling plants for Pepsi-Cola in various towns. Marsh retired in 1964. After Marsh’s retirement, the firm he established continued under various names, most recently Hawkins Kibler Associates. Marsh was buried in Elmwood Cemetery in Charlotte, where his wife, Lavonne, was buried in 1948.

In addition to the projects cited in the building list, several other Charlotte projects have been cited to Marsh for which additional information is needed. These include an apartment house at Queens Road and Pembroke Avenue (1936); the Jefferson Apartments; the Liggett Drug Company Building; the Torrence Hemby House; a gymnasium for the Thompson Orphanage; the South Branch Public Library (1956); F. H. Ross Warehouse and Office Building; and the Firestone Tire and Rubber Company Building. Another commission cited to Marsh is the Selwyn Avenue Presbyterian Church, but the history of the church notes church member Chuck Wheatley as architect of the ca. 1950 Colonial Revival structure. Marsh is also credited with several North Carolina commissions beyond Charlotte, including First Baptist Church, Mooresville; the H. B. Wilkenson House, Concord; the W. Lineberger House, Shelby; the Kannapolis High School in Kannapolis; and theaters in Kannapolis and Lincolnton. Many more projects appear in the job list cited below and merit further research.

Records of the firm begun by Marsh, dating from 1923 to 1972 are held in the Hawkins Kibler Associates architectural drawings collection (mss#275), Special Collections, J. Murrey Atkins Library at the University of North Carolina at Charlotte. A job listing made in 1983 from this collection by the Charlotte-Mecklenburg Historic Properties Commissions notes names and some dates for building projects represented in more than 90 tubes in the collection; many of them, especially the numerous residences, are undated. When processing of these records is completed, further research in this collection will provide additional information about Marsh and his work.