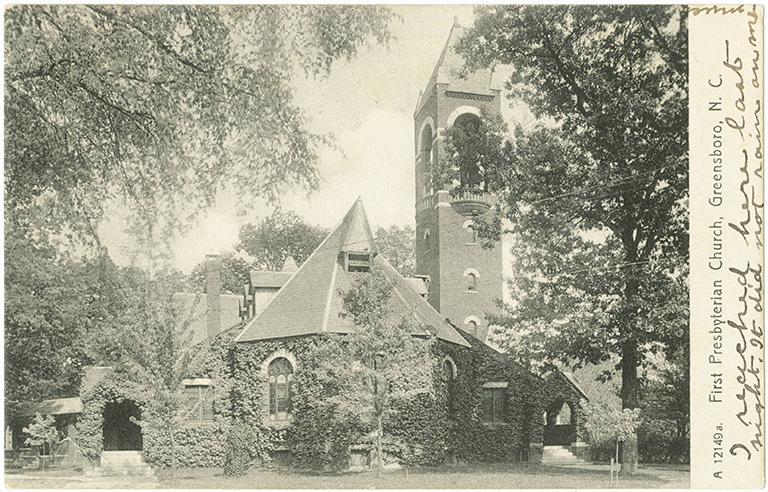 L. B. Valk and Son (1859-1924) was a prolific Brooklyn, New York, architectural firm with a long architectural practice of national scope. Lawrence B. Valk (1838-1924) began practice in 1859 and took his son Arthur as a junior partner in 1885. While headquartered in Brooklyn, the firm designed many churches in the eastern, midwestern, mountain, western, and southern states, frequently in the Romanesque Revival style, before moving to California in the late 1890s. The firm’s principal surviving work in North Carolina is the First Presbyterian Church, an imposing Romanesque Revival edifice built in Greensboro in 1890-1892.

Valk and Son’s first known commission in North Carolina was Greensboro’s First Baptist Church. It was constructed to replace the congregation’s previous church, which had been destroyed by fire. When the Greensboro Morning News of April 7, 1887, reported that the new Baptist church at the corner of Washington and Greene Streets was nearing completion, it noted, “The original design was furnished by an architect of New York city, Mr. Lawrence B. Valk, of the Tribune buildings, but this was extensively altered by the church building committee after the foundation had been laid.” The committee had decided to omit an originally intended school and classrooms and build a single auditorium, and to shift the intended tower and entrance to a different position on the building. The newspaper provided a detailed description of the Gothic Revival style church, which was built of grayish brick. The builder was identified as Thomas Woodroffe (Woodruff) of Greensboro.

A few years later, Valk gained the commission for a new building for Greensboro’s First Presbyterian Church, which was among the city’s oldest and most prestigious congregations. The new building, their third sanctuary, replaced a building erected about 1846, which was torn down to make way. The building committee, chaired by A. M. Scales, advertised in the local newspapers in 1889 for proposals for construction of the building for which bids could be made for “everything as a whole” or for separate components. L. B. Valk and Son of Brooklyn was identified as the architect. Plans and specifications could be viewed at the store of S. S. Brown. The auditorium was to seat 500, plus the Sunday school attached would accommodate 300. Work was to begin between Nov. 1, 1889 and March 1, 1890 and to be completed within six months (Greensboro North State, October 3, November 7, November 28, 1889).

As was frequently the case, construction was delayed for a time. The North State of August 28, 1890, announced that Porter and Godwin of Goldsboro (a prolific firm at the time) had taken the construction contract and work was to begin soon. Like the Baptists, the Presbyterians also made some changes to Valk’s plan. The Greensboro Workman, reporting on August 27 on the closing of the contract, mentioned an impressive drawing of the building and noted, “the plan of the church will be a modification of the one shown in the drawing.” The building was completed and in use by autumn of 1892. Whether Valk and Son had any other commissions in North Carolina is unknown.