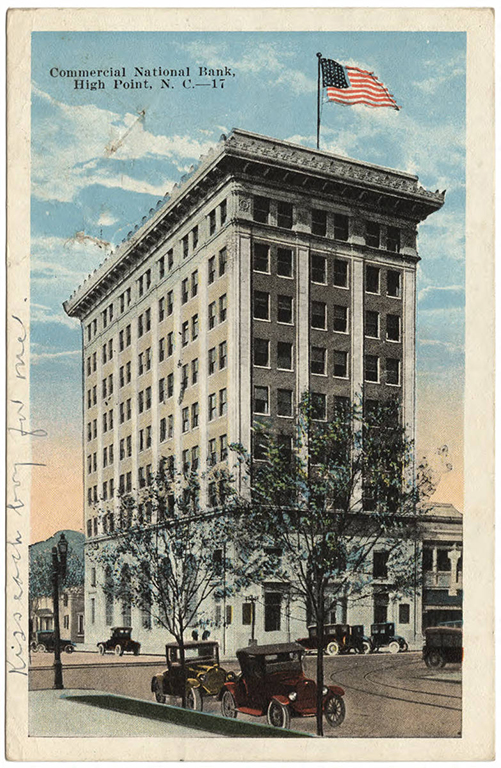 William Crumley (W. C.) Holleyman, Jr. (September 12, 1893-January 13, 1939), a native of Atlanta, Georgia, was an architect active in Greensboro in the early 20th century and was best known for his residential work, including fine houses built during the 1930s.

A son of W. C. Holleyman, Sr., a merchant, and Esther Holleyman, W. C. graduated in architecture from Georgia Tech in 1917. He registered for military service in August 1917 and in 1918 was promoted to the rank of captain (Atlanta Constitution, April 3, 1918). Honorably discharged in September 1919, he went to New York, where the Atlanta Constitution of December 28, 1919, reported that his parents were spending the holidays with him.

According to his obituary, Holleyman practiced architecture in New York for two years before going to Greensboro in 1921. He evidently formed an acquaintance in the metropolis with New York architect Charles C. Hartmann, an associate of hotel architect William Lee Stoddart.

In the late 1910s, Hartmann had begun to visit North Carolina to supervise two Stoddart hotel commissions for which he was chief designer—the Sheraton in High Point and the O. Henry in Greensboro. Hartmann impressed Greensboro leaders, and in 1921 Julian Price, vice-president of Jefferson Standard Life Insurance Company, invited Hartmann to come to Greensboro, promising him the commission for the company’s $2.5 million headquarters building, provided that Hartmann open a permanent practice in the city. Hartmann’s successful and prolific office in Greensboro operated from 1921 until his retirement in 1966.

The Greensboro Daily News of September 14, 1921 noted Hartmann’s commission to design the 10-story Commercial National Bank in High Point and reported that “W. C. Holleyman, Jr., Mr. Hartmann’s associate in Greensboro” stated that Hartmann and the bank officers had gone to New York to inspect banking rooms there. The article also identified Hartmann as architect of the 17-story Jefferson Standard Building, upon which construction would not begin in 1922.

In 1921 Holleyman was listed in the city directory as working with Hartmann. In 1923, Holleyman married Frederica Genevieve Bremer of Philadelphia in that city (Atlanta Constitution, January 28, 1923). Holleyman continued his association with Hartmann, as indicated by Greensboro city directories of 1923-1928. Although it is likely that Holleyman worked with Hartmann on the Jefferson Standard Building, it is not yet known how the two architects divided up their work or what role Holleyman had in projects credited to Hartmann.

In the late 1920s Holleyman established his own practice: directories of 1929, 1930, and 1934 show his architectural office in a building at 100 N. Elm Street, next door to Hartmann who was at 101 N. Elm Street. Notably, these two buildings held the offices of seven of Greensboro’s nine architects listed in the 1930 directory; two others were elsewhere on Elm Street. By 1938 Holleyman had moved his office to 114 N. Elm, while Hartmann stayed at 100.

During the Great Depression, Holleyman continued to gain commissions in Greensboro and other North Carolina communities, making connections with still-prosperous clients in a time when many architects experienced difficulty in finding work. These included handsome residences in various revivalist styles in Fayetteville, Asheboro, and especially the resort village of Pinehurst in Moore County, where he designed several notable buildings.

Notable among Holleyman’s known works in Greensboro is the eclectic Norman Revival style Herman Cone House (1935-1936) for the oldest son of textile magnate Ceasar Cone. It is one of numerous grand residences in the prestigious Irving Park suburb, where Holleyman may have designed other residences. Holleyman also designed the Science Building at present UNC-Greensboro, employing a red brick Colonial Revival campus style already established there by Greensboro architect Harry Barton. The Greensboro Daily News of October 12, 1938 illustrated its account of the Science Building with Holleyman’s perspective drawing, which survives at the UNCG Libraries (see (http://library.uncg.edu/dp/ttt/index.aspx?verb=20&start=226). By the time the building opened in 1940, its architect had died: the Burlington, N. C. Daily Times of January 14, 1939, reported that Holleyman had died on January 13 of a heart attack at age 45, which cut short a career in mid-course.