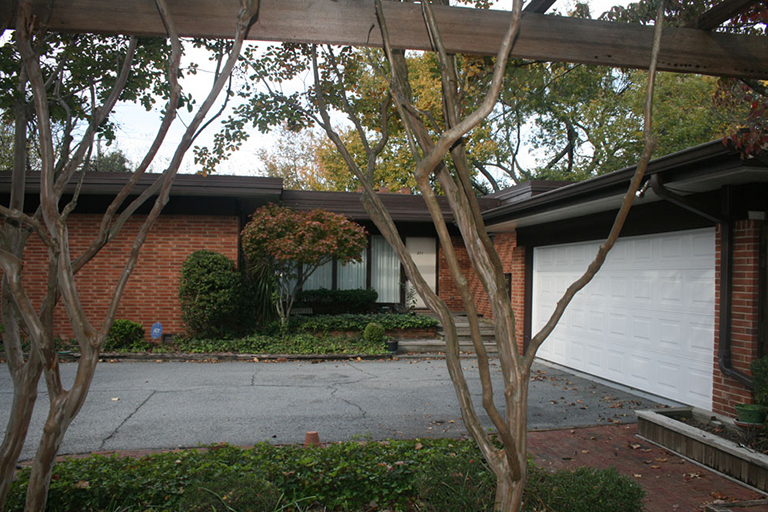 Gerard E. Gray (July 17, 1919-May 16, 2001) was one of a group of four African American architects who lived and worked in Greensboro in the mid-20th century, including William Streat, W. Edward Jenkins, and Clinton Gravely. Together these men comprised the first major group of successful African American architects in North Carolina. Only isolated cases of practicing black architects (see Gaston Alonzo Edwards) had occurred previously in the state, yet by the early 1960s these men were working in the same city, forming a supportive group well utilized by the city’s African American intelligentsia, as well as some white clients. Unlike the others, Gray never worked for noted Greensboro architect Edward Loewenstein, but had worked as a draftsman for architects in Philadelphia and for Greensboro architect Thomas P. Heritage before starting his own practice.

Gray was born in Cheraw, S. C. and graduated from high school in Bennettsville, S. C., in 1937. He first moved to Greensboro to attend college at present-day North Carolina A&T State University, where he received a bachelor’s degree in architectural engineering in 1942. After serving in the Army Corps of Engineers during World War II, Gray completed a master’s degree in architectural engineering from the University of Illinois in 1949. He worked in Philadelphia, served in the Korean War, and then moved back to Greensboro to become an associate professor at A&T in 1953. He also started his own limited architectural practice in 1961.

Gray continued as associate professor of architectural engineering at A&T until the mid-1970s, when he became the director of the university’s physical plant. William Streat was chair of the department of architectural engineering during Gray’s tenure as a professor, and together the two strengthened the department, which received national accreditation in 1969. Gray taught classes on working drawings, building materials, and the history of architecture, while Streat focused on engineering courses. Gray’s former student Vincent Spaulding, who served as an engineer for the United States Navy, endowed a scholarship in Gray’s name at A&T.

Gray and Streat both supplemented their careers as professors with professional architectural work for other architects’ firms and their own. Gray focused on residential design, the first known example being the 1946 John and Juanita Spaulding House, built just after World War II and prior to his graduate education. Later, as a professor, Gray worked for Greensboro architect Thomas P. Heritage in the late 1950s, an experience that helped him gain acceptance into the North Carolina chapter of the AIA in 1962. He was the third black member to join, after W. Edward Jenkins and William Streat. With the establishment of his own practice in 1961, Gray began designing modernist residences for prominent members of the black community who approached him to design their homes. Clients included Dr. Charles A. Fountain, founder of the landscape architecture program at A&T; Dr. Alvin V. Blount, the first African American doctor to perform surgery at Moses Cone Hospital; Dr. Eugene Marrow, professor of biology at A&T; Melvin Alexander, an engineering professor at A&T and a member of the board at the American Federal Savings and Loan Association; and Joe and Eunice Dudley, founders of a well-known brand of hair care products that bear their name.

The Juanita Spaulding residence, Gray’s only known traditional design, contrasts with his later modernist commissions, which reflect the influence of a modernist focus found in postwar architectural schools and embody a trend among African American clients following World War II. The homes Gray designed include ranches and split-levels, all of which share his subdued interpretation of the modernist style: a horizontal emphasis, Roman brick veneer and/or vertical siding, and solid front facades that contrast with more open rear elevations. A range of modernist touches, likely reflecting the wishes of the client, include the stone and plate glass windows marking the front-gable bay entrance of the Melvin Alexander House; the flat roof and extensive landscaping of the Dr. Charles Fountain House, and the prow-shaped balcony and prominent front façade chimney on the Joe and Eunice Dudley House. During this era, those black families who had the money to commission an architect to design their home most often chose the brick ranch, likely due to the form’s associations with a comfortable middle-class life, its spaciousness, and its economical construction.

Gray’s residential designs for prominent African Americans in Greensboro show that he, like his colleague William Streat, made an impact on the community not only as an educator influencing future architects of color, but also as a player in the economic and social ascendance of several families, designing modernist homes for them that demonstrated a stylistic optimism embraced by this community.

Note: Further research may reveal more buildings designed by Gray. As of this writing, only the six residences included on the building list are confirmed.