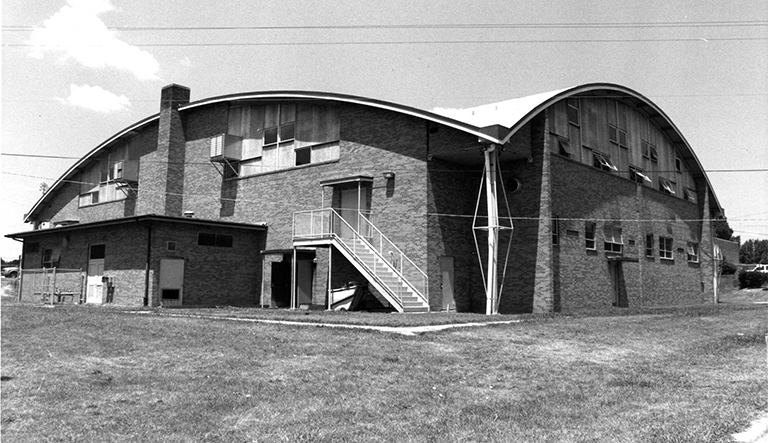 W. Edward (Willie) Jenkins (Nov. 14, 1923-March 18, 1988) was among the few African American architects practicing in North Carolina in the mid-twentieth century. He worked in the Greensboro office of Edward Loewenstein (Loewenstein and Atkinson) from 1949 to 1962 and thereafter on his own until his death. Like Loewenstein, who was evidently the only white architect in the state who employed black architects in this era, Jenkins favored modernist designs and innovation, and his work fulfilled the desire of many black clients to have modernist buildings expressive of progress.

As Jennifer Martin has commented, Jenkins and others saw modernist design as “a new beginning and a symbol of the promise the future held for African Americans in the segregated South.” Whereas many architects found their white clients reluctant to embrace modernism, especially in their homes, Jenkins and his primarily black clients shared a preference for modernism’s identification with advancement rather than the past. On this pattern elsewhere, see Margaret Ruth Little, “Getting the American Dream for Themselves: Postwar Modern Subdivisions for African Americans in Raleigh, North Carolina,” Buildings & Landscapes: Journal of the Vernacular Architecture Forum Vol. 19, No. 1 (Spring 2012), 73-86. This account comes primarily from Samuel J. Hodges III, “Willie Edward Jenkins” in Dreck Spurlock Wilson, ed., African American Architects, A Biographical Dictionary (2004), and Jennifer Martin, “James Benson Dudley Senior High School and Gymnasium” National Register of Historic Places nomination, 2003. Further study of Jenkins’s career and his relationships with his clients and fellow architects is needed.

Willie Edward Jenkins was born in Wake County to Willie and Emmaline Jenkins; his father died when he was small; and his mother worked as a seamstress. Jenkins attended local public schools and graduated from Washington High School. After serving in the U. S. Army from 1943 to 1946, he like many other veterans strove to further his education and his prospects. He studied architectural engineering at North Carolina A&T and graduated in 1949. He was part of the generation of black Americans, especially veterans, who hoped for a new day in the nation following their experiences in World War II.

As reported by Jim Schlosser (“Dudley nominated for historic status, [Greensboro News-Record, Sept. 3, 2002]), Jenkins initially found little opportunity to practice his profession and worked for a time as a telephone lineman. Not long after his graduation, however, he found a unique opportunity in the Greensboro firm of Loewenstein and Atkinson as the first black architect the firm had hired. At that time it was highly unusual for a white firm to employ black architects, and Loewenstein’s firm may have been the first in the state to do so.

Jenkins was licensed to practice architecture in 1953, the third black architect licensed in the state, following Gaston Alonzo Edwards (Raleigh) and William A. Streat, Jr. (Greensboro), the latter of whom graduated from MIT in architectural engineering in 1949 and served as professor and chair of the Architectural Engineering Department at North Carolina A&T University from 1949 until his retirement. William Gupple, another graduate of NCA&T, became Jenkins’s colleague as the second black architect Loewenstein employed; he left for New York City in the early 1960s and returned to Greensboro much later.

In Loewenstein’s firm, Jenkins had opportunities to design modernist works in company with Loewenstein, who had graduated from MIT and worked in both modernist and traditional modes. Lowenstein and Atkins took commissions (as did other white architects) from black as well as white clients, and planned buildings for major black institutions and leading black citizens.

Jenkins’s best known design is the modernist Dudley High School Gymnasium, a boldly innovative structure with intersecting roof arches, built for the black Dudley High School and dedicated in 1959. Although architectural leaders were promoting structural innovation—epitomized by the Dorton Arena in Raleigh (Matthew Nowicki)—most local school boards stuck with conventional structural systems even in modernist school buildings. Jenkins’s design won wide acclaim, including recognition and awards from the National Association of School Architects, the American Institute of Steel Construction, and the local American Institute of Architects chapter. The National Association of School Architects chose a scale model of the gym to display at its annual conference in Atlantic City in 1959. Although the awards went to the firm, according to Jennifer Martin, Jenkins’s name was on the plans for the gym, which are held by the local school system. As Schlosser reported in 2002, Jenkins’s daughter, Miltrine Jenkins Barden, said that her father’s role in designing the gym “made the whole community proud. It was unheard of in those days for black men to do work like that.”

Jenkins also played an important role in the creation of modernist residential architecture for leading black citizens who participated in a broader trend of favoring modernist design in the post- World War II era. Among these projects was the J. Kenneth Lee House (1960) in Greensboro, an outstanding example of modernist residential work for attorney Lee (b. 1923), a Civil Rights leader who was one of the first two African American students and graduates at the University of North Carolina Law School. Jenkins also planned other modernist residences for African Americans in Greensboro, Winston-Salem, and other towns.

After more than a decade with Loewenstein, Jenkins opened his own practice in 1962 and continued in the profession until his death in 1988. As he had done while working in Loewenstein’s office, he created modernist designs primarily for black clients and institutions, including educational and religious buildings as well as residences for the growing black middle class. He designed several buildings for North Carolina A&T in Greensboro, including the football stadium, in the 1970s and 1980s. He also planned facilities at North Carolina Central University in Durham and for modernist churches in Greensboro and Durham. As noted by Heather Fearnbach, he designed several Winston-Salem buildings, beginning with the home of a former NCA&T classmate Charles W. Gadson and his wife Irma, erected in 1959 while Jenkins was working with Loewenstein’s firm. Gadson was president of Twin City Electrical Contracting, a firm he established in 1949. Among Gadson’s many commissions, he did the electrical work in buildings Jenkins designed in Greensboro, Winston-Salem, and Charlotte. Jenkins and Gadson worked together on Winston-Salem projects including Gadson’s own house; the Juanita S. Herring House (1964), Dr. J. Raymond and Ruth Oliver House (1967), and Mt. Zion Baptist Church (1969). According to Jennifer Martin, Jenkins was the first African American to serve on the North Carolina Board of Architectural Registration, and he also became a member of the American Association of Architects and of the Piedmont North Carolina section of the American Institute of Architects.

At Jenkins’s death, Jim Schlosser wrote in the Greensboro News-Record of March 21, 1988, “The late Greensboro architect Ed Loewenstein said dedicated architects die unhappy. They never got to unleash creative juices because of pressure to please clients. But in at least one instance, architect W. Edward Jenkins, who worked for Loewenstein, was able to satisfy the urge for innovation and Jenkins likely would have enjoyed a successful career without Loewenstein’s help, but the experience and mentoring he received surely made it easier once he went on his own.”

Note: Samuel J. Hodges III’s biography of Jenkins in African American Architects includes a list of more than 40 projects. The building list here represents a selection of these.