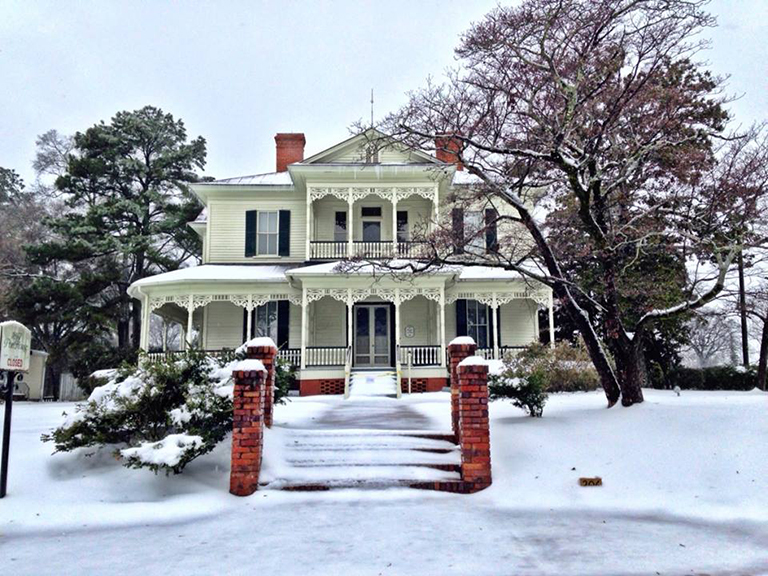 James Christopher (1828-1915) and Elijah Ruffin Vaughn (1833-1925) were prominent among the house carpenters active in the Upper Cape Fear region in the mid-19th century. Both were normally cited by their middle names. The Vaughns are best known as the traditionally cited builders of Camp Ground Methodist Church (ca. 1860/1858-1862) in Cumberland County, one of the very few of the Greek Revival country churches in that region for whom the builders have been identified. Strong local tradition also asserts that the Vaughns worked along with many other artisans in constructing the United States Arsenal in Fayetteville and built several notable antebellum houses in Fayetteville.

The attribution of specific buildings to the Vaughns, either together or singly, is based on longstanding local and family tradition. Given their large families, long life spans, and prominence in their close-knit community, as well as the stature of their clients, much of this traditional information is probably credible. Principal sources are local historian Lucile Johnson and the Vaughns’ great-nephew, Robert Clark, who in 1981 recorded what he had been told of the builders by his father and cited the buildings his family and older Fayetteville citizens had “always said” were built by one or both of the Vaughns. The architectural character of the buildings shows a preference for conservative Greek Revival details and proportions; further research may confirm or question these attributions.

James Christopher and Elijah Ruffin Vaughn were the two youngest sons of Gideon Vaughn (1792-1852) and his wife Charity Babb Vaughn (1796-1876). Gideon and Charity married in 1810 and had at least thirteen children between 1814 and 1835 (family genealogy, Ancestry.com). Family information indicates that Christopher was born in 1828 in Fayetteville, and Ruffin was born in Wake County. It is likely that Christopher and Ruffin received early training from their father, Gideon, a cabinetmaker and farmer, and their much older brother, William Vaughn, a shipwright. Descendants inherited pieces of furniture credited to Gideon Vaughn. Family tradition reports that Christopher specialized in masonry and plastering, while Ruffin, a carpenter by trade, is credited with designing and superintending construction of the buildings they erected.

The majority of the buildings attributed to the Vaughn brothers are Greek Revival style structures dating from the 1850s. Only a few of these still stand, but old photographs show some of the others and illustrate their kinship with the surviving examples. Camp Ground Methodist Church takes a familiar pediment-front form with simple Greek Revival detail and paired entrances. Robert Clark notes that Christopher Vaughan was a member of this church.

The principal surviving antebellum residence in Fayetteville attributed to the Vaughns is the Greek Revival style house known as Fair Oaks, built about 1858 for E. J. Lilly, a large, 2-story frame house with high hip roof and Doric porch. Until the late 20th century, its near neighbor was the large, frame Greek Revival house known as Westlawn, constructed for Fayetteville merchant and banker John D. Williams about 1858, likewise a 2-story, double-pile form with hip roof, central passage plan, Greek Revival finish including molded trim with cornerblocks. Other houses cited to the Vaughns stood into the 1930s and longer, but most of them have been lost, as reported by Lucile Johnson (1988). These include the Ruffin Vaughn House, which was similar to the two merchants’ houses but is only one story tall. Other lost antebellum Fayetteville houses credited to the Vaughns include the house built for Miss John Ann Colvin and known as “Tree Haven,” which stood on Morganton Road; the Stedman-Lamb House on Lamb Street, called “Sunnyside”; and the James C. Dobbin House, which stood on Dobbin Avenue.

Family tradition also states that the Vaughn brothers worked on construction of the United States Arsenal at Fayetteville, an immense complex of brick structures that required a large work force for several years. Construction continued from 1836 until the Civil War with as many as 200 men at work. It is believed that the Vaughns worked under George Hodges, the master builder of carpentry for the arsenal. According to Robert Clark, Ruffin Vaughn named his eldest son George Hodges Vaughn, and when the boy died young, named his next son Edward Hodges Vaughn. The Vaughns’ connection with the arsenal work is substantiated by a notation in Ruffin Vaughn’s time-book, “commenced worked with John Minor on January 27, 1858.” John Minor is known to have been a journeyman carpenter at the arsenal for many years. The Vaughns are also believed to have become acquainted with and learned from the arsenal’s architect, Scotsman William Bell.

Both Vaughn brothers served in the North Carolina Infantry during the Civil War. The arsenal was burned by General William T. Sherman’s troops near the end of the war, an event which is said to have broken William Bell’s heart. After the war, the Vaughns continued in construction for a time. Ruffin Vaughn is credited with building a small frame house for his widowed mother, Charity, in 1866; remodeled over the years and known as the Neal Penny Clark House, it continued in the hands of descendants for many years and was still standing in the 1970s. The Vaughns are also traditionally associated with construction of MacPherson Presbyterian Church in 1867, which is said to have incorporated materials salvaged from the destroyed arsenal. It is a stuccoed brick structure with Gothic Revival windows and a belfry. Ruffin Vaughn became a member and a deacon of this church, and the ornate reading desk bears a brass plaque stating it was made in 1887 by Ruffin Vaughn. One other postwar building, the Edgar Allen Poe House (ca. 1898) is attributed to the Vaughns—a 2-story frame house with elaborate stylized wooden ornament on the 2-story entrance porch, which Robert Clark described as the type produced by Ruffin Vaughn’s Novelty Works.

Family tradition and public records trace the Vaughn brothers’ family lives. In 1850 the United States Census recorded the household of Gideon Vaughn, aged 50 and a farmer, which included Charity, aged 53, and six of their children, including Christopher (aka James), 21, listed as a laborer, and Ruffin, 14. According to Robert Clark, Christopher and Ruffin Vaughn lived in the same household from the time of their births until 1859 when Christopher married Isabella (Isabellea) Catherine Matthews of Lee County and bought a farm a short distance away. Robert Clark stated that after his marriage, James Christopher Vaughn began to buy farms and became more interested in farming than building. In the 1860 census, James (Christopher) Vaughn was identified as a Master Mason, aged 31, and head of a household in a farming area, which included Isabella and a baby, Margaret. He had $500 in real estate and $100 in personal property. Also in the household was Robert Gardner, 15, an apprentice mason. The 1860 census showed Ruffin living with his mother and siblings, and identified as a carpenter. Ruffin married in 1861, to Isabella’s sister Margaret Matthews. The census of 1870 listed Ruffin as a carpenter and James C. as a brickmason, and both owned real estate and had children at home. According to Lucile Johnson in “The Vaughn Family” (1988), the homes of Christopher and Ruffin Vaughn stood on the south side of the Western Plank Road, but both “succumbed to business,” as did their father’s residence.

After the war, both men focused increasingly on their farming operations, and for a brief period in the 1880s Ruffin Vaughn had a manufacturing operation called the Novelty Works, which produced decorative woodwork popular in the period. The brothers continued in building only intermittently. In 1886 the Fayetteville Weekly Observer of April 8 carried an account of a recent conversation with Ruffin Vaughn, the proprietor of the Novelty Works, who was described as “not only a skilled architect and artisan but a careful and observant farmer.” In 1900 both brothers identified themselves to the census taker as farmers.

The Vaughn brothers and their wives lived to celebrate their Golden Wedding anniversaries in 1909 and 1911, respectively. James Christopher Vaughn and his wife and at least some of their children were interred in the Camp Ground Methodist Church cemetery, and Ruffin Vaughn and his family were interred in the MacPherson Presbyterian Church cemetery. Because of their longevity and extensive community ties, as well as the recollections of their descendants including grand-nephew Robert Clark, unusually strong tradition relates their work, in contrast to the many other local builders of their day, whose names have not yet been learned.