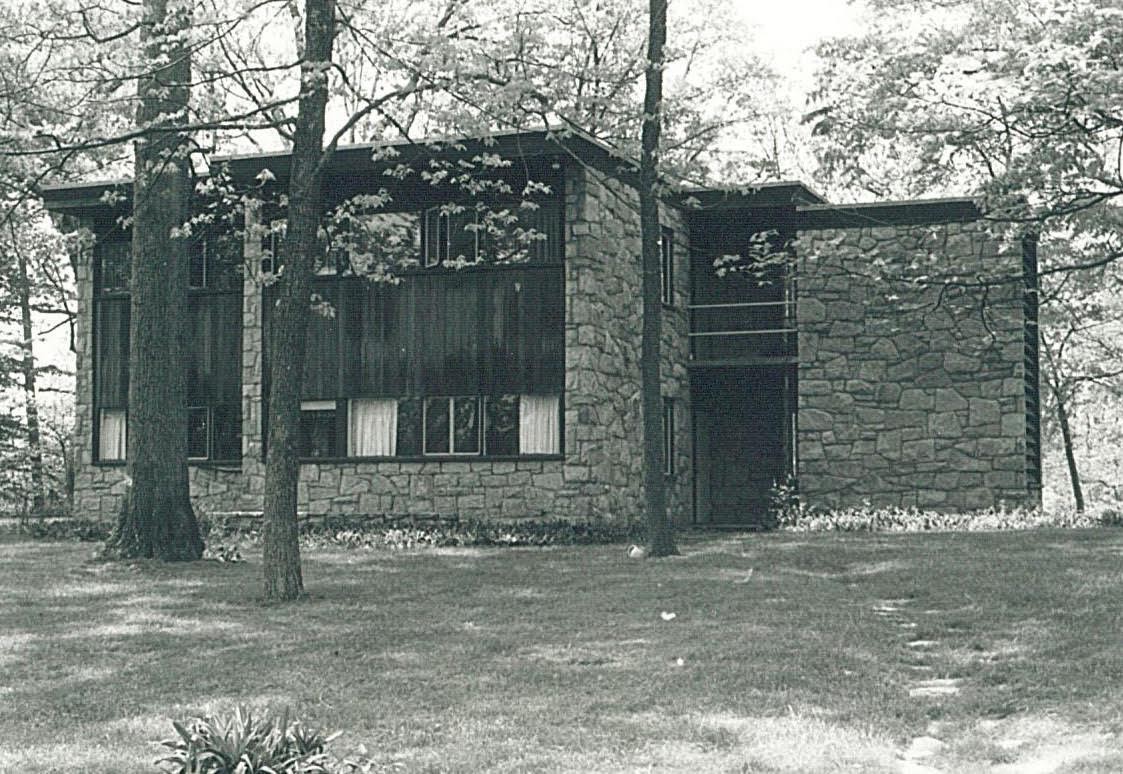 Marcel Breuer (May 21, 1902-July 1, 1981), the Hungarian-born furniture designer and architect associated with the Bauhaus school of arts and crafts, gained an international reputation as a leader in modernist architecture in Europe and the United States. Early in his tenure in the United States, he planned two projects in North Carolina. One of these, a complex for Black Mountain College (designed with Walter Gropius, his mentor and architectural partner 1937-1939), was never built, but the other, the Sprinza Weizenblatt House (1940-1941) in Asheville, was constructed and still stands. The story of the internationally known modernist’s work in western North Carolina is a notable chapter in the saga of the spread of modernism in the United States through the diaspora from Nazi Germany.

As a young man, Marcel Breuer studied at the famed Bauhaus arts and crafts school (1919-1933) founded by Walter Gropius in Weimar, Germany. Breuer soon became head of the carpentry shop, and Gropius (1883-1969) became his longtime mentor. Breuer gained fame for his tubular chair designs, which remain popular classics of furniture design. He spent a brief period in Paris, then returned to the Bauhaus, which had moved from Weimar to Dessau and would soon move to Berlin. Ludwig Mies van der Rohe, was its director from 1929 to 1933, when the school’s leaders closed the school under pressure from Nazism.

Driven from Germany by the rise of Hitler, Bauhaus leaders and students carried its influence worldwide, including to the United States. Mies van der Rohe emigrated in 1933, settled in Chicago, and became a principal figure in modernist architecture. Walter Gropius fled to London in the mid-1930s, as did Breuer. In 1937 both men moved to Cambridge, Massachusetts, where Gropius had been appointed chair of Harvard’s Graduate School of Design, and where Breuer also taught. Through their teaching and their architectural practice, including a professional partnership, they and other brilliant immigrants fleeing Nazism played a critical role in defining and establishing modernism in the United States. The Gropius-Breuer partnership terminated in 1941, and Breuer moved to New York City, where he practiced for the rest of his life as one of the stars of the modernist movement.

The Black Mountain College project developed at the outset of Breuer’s and Gropius’s careers in the United States. Black Mountain College had operated for several years in space rented from the Blue Ridge Assembly, which had a campus in Buncombe County (see Jallade, Louis E. (1876-1957)). In 1937 its leaders sought to establish their own campus, with an architectural character that expressed the widely known modernist, progressive philosophy of the school, which included avant garde faculty and students.

At the suggestion of American modernist architect A. Lawrence Kocher, the editor of The Architectural Record, Black Mountain College leaders made contact with Gropius, newly arrived at Harvard. Gropius first visited the campus in 1937, and in 1939 he and his architectural partner Breuer developed plans for a complex based on the goals expressed by the college. The Asheville Citizen-Times of April 8, 1939, reported that Breuer, “architect and associate of Dr. Walter Gropius,” was at Black Mountain College conferring with school leaders concerning the best sites for the new buildings at Lake Eden. He had brought along preliminary sketches. The complex was to be divided into “units which may be constructed by the college as money is obtained.”

The two architects provided a design for which drawings and photographs of a model survive, and which gained widespread national attention. The New York Herald Tribune of January 10, 1940 carried a photograph of Gropius and Breuer with a model of their design for the Lake Eden Campus. But fundraising for the costly project fell short of the sponsors’ hopes, and faced with war in Europe and the prospect of American involvement and restrictions on building materials, the school leadership instead commissioned a simpler design by Kocher which could be built by faculty and students; one section, the Studies Building, was built.

It was during this period that Marcel Breuer planned the only known building in North Carolina that was actually constructed from his design—the Sprinza Weizenblatt House in Asheville. Dr. Sprinza (Esperanza) Weizenblatt (1895-1987), a Rumanian-born opthalmologist in Vienna, had a chance meeting there with visiting Asheville opthalmologist Harry Briggs, which led to her move in 1928 to Asheville, where she joined Briggs’s medical office and later established her own practice. During her long life she was renowned for her many contributions to her adopted city.

Asheville architect Anthony Lord (1900-1993), who was the supervising architect for the project, recalled that Dr. Weizenblatt was a lively woman interested in the arts, modernism, and new ideas, She had opportunities to meet Breuer during his visits to the Asheville area. In 1940 she asked him to design her duplex residence in the Lakeview Park suburb of Asheville. Shedding light on the commission is a letter posted on the web by the Marcel Breuer Digital Archive at the Syracuse University Libraries (https://breuer.syr.edu/xtf/view?docId=mets/23111.mets.xml;query=;brand=default).

On May 21, 1940, Breuer wrote to Dr. Weizenblatt, “It certainly was a pleasure for me to make your acquaintance in Asheville, last Thursday, the 16th,” and expressed his gratitude for in “the confidence you have shown in my work.” He had already started with sketches and planned to send them to her within two or three weeks. He summarized the points discussed at their meeting, describing a two-family residence in which she would rent out the lower floor and live on the upper floor, which would have “as much sun and view as possible.” He listed further details and expressed the need to employ a local supervising architect or a staff member sent down from his office. He asked a few questions about the site, the location of the fireplace, and the direction of the prevailing wind. The Marcel Breuer Digital Archive also includes several drawings for the project. Local architect Anthony Lord, as noted earlier, was employed as the supervising architect.

Like many houses in the region, the Weizenblatt House employed natural local materials of wood and stone, but in contrast to its generally revivalist and eclectic neighbors in the suburb, it followed a clearly modernist design with simple, clean forms and an asymmetrical arrangement. As Tony Lord remembered, much of the stone came from a quarry near Fletcher, but when that quarry closed for the winter, Dr. Weizenblatt, who often hiked in the area, found another source at Mount Pisgah. The house is one of the earliest fully developed International Style residences in the state. Perhaps because of its location, it has not been widely published in accounts of Breuer’s role in American modernism.

Lord, himself an admirer and designer of modernist architecture, recalled many years later that Breuer “was a nice guy . . . a youngish guy. . . came down [here] a number of times and gave a lecture to a meeting of the Asheville AIA chapter. (Catherine W. Bishir, telephone conversation with Anthony Lord, March 13, 1989, cited in North Carolina Architecture.) The Asheville Citizen-Times of July 13, 1941 carried an account of Breuer’s talk at the recent meeting of the North Carolina chapter of the American Institute of Architects, held at the Pisgah Inn and organized by Lord, the president of the chapter. Breuer, identified as a former associate of the Bauhaus, “discussed the influence of materials on design. He told of new ways to use familiar materials, and talked on the aesthetic aspect of modern architecture.”

After the war, in 1948 the North Carolina chapter of the American Institute of Architects held its annual meeting at the University of North Carolina. The meeting featured a display of recent work by North Carolina architects, plus an exhibit called “The Modern House Comes to Life,” with models and drawings from the Bertha Shaeffer galleries in New York. The Raleigh News and Observer of January 10, 1948, noted that there would also be exhibits of (modernist) buildings in North Carolina—the Friedlaender House in Greensboro, the Weizenblatt House in Asheville (noted as Breuer’s design); models and photos of Black Mountain College; and the Container Corporation of America.