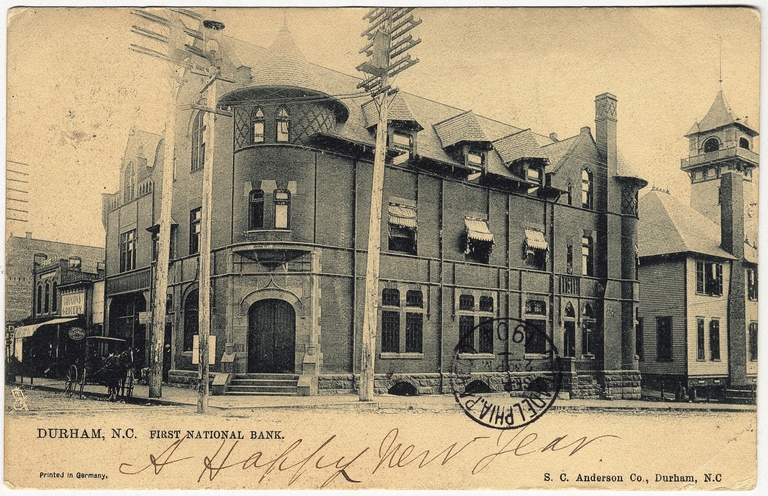 Charles H. Norton (1857-1901), a builder in Durham in the 1880s and 1890s, came from his native Virginia in 1888 to help rebuild Durham after a major downtown fire. Among his first projects was construction of a Romanesque Revival style commercial building, the E. J. Parrish Building, for pioneer tobacco merchant Parrish. Like other builders who arrived in Durham as the ashes were cooling, Norton found opportunities among leaders eager to rebuild the whistle-stop town of frame structures into a city of substantial and eclectic brick buildings.

Norton served as contractor for leading industrialists such as the Duke and Watts families. Within a short span he built a large annex to the Dukes’ tobacco factory plus two cotton mills in industrial Italianate styles: the Chateauesque-Queen Anne style First National Bank Building; and the Gothic Revival style First Presbyterian Church. For the newly formed county, he built the Durham County Courthouse (1887-1889) in brick with a central, mansard-roofed tower from designs by architect Byron A. Pugin. He also undertook construction of the towered, Romanesque Revival style Trinity College Main Building (1890-1891) at Trinity College, designed by architect Samuel Linton Leary for the college that, with Duke family support, had just established a campus in Durham. Trouble ensued when the tower collapsed, causing a bitter debate and delaying the opening of the college.

In 1896 Norton was injured when his buggy was hit by a train as he and his co-passenger, architect A. G. Bauer, were traveling to a building site (Durham’s First Baptist Church). Bauer suffered lasting injuries, but Norton recovered and resumed his practice in 1897 with a towered, brownstone mansion, the George W. Watts House. The Durham Record reported on February 11, 1896, that Norton, the “well-known contractor” was to build the $75,000-$100,000 residence and that “architects”—unnamed and as yet unidentified—had been “working on the plans since the first part of January.” A notice in the Durham Record on April 16, 1900, stated that “Architect, Builder and Contractor” Norton “draws his own designs” and listed his works. In 1900 the census showed Norton as “architect-builder” in Durham with wife, Nannie, and three young children. He continued to build factories and had a contract for a cotton mill in Charleston before his unexpected death in 1901. In Durham, nearly all of the buildings of the 1890s boom years have fallen to fires and extensive rebuilding that began in the early 20th century and essentially erased the 19th century downtown. Briefly the pride of Durham, Norton’s diverse and imposing works survive only in photographs.