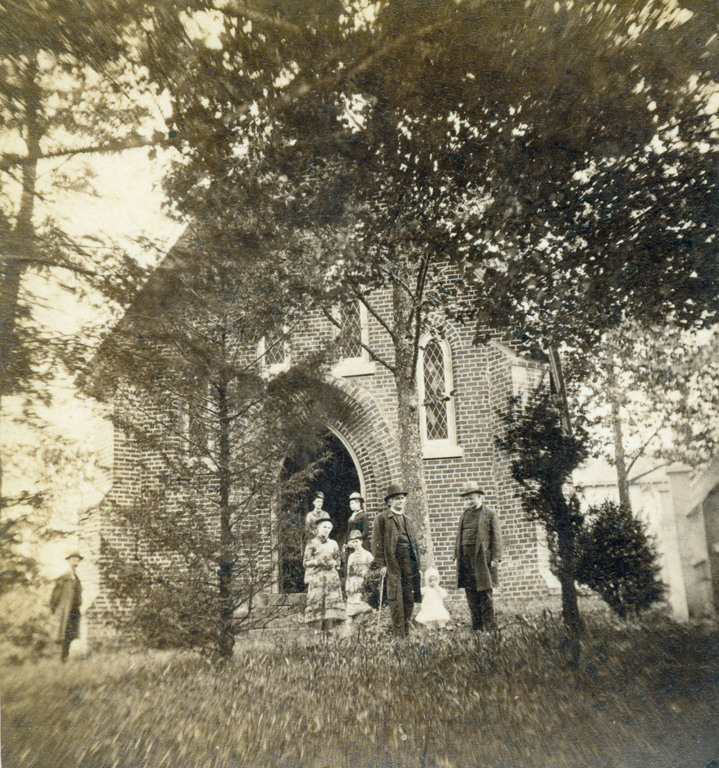 Frank Wills (1822-1857), an English-born New York architect who planned many Gothic Revival style churches for Episcopal congregations, participated in the Ecclesiological movement that promoted “authentic” medieval models as the ideal for churches. Soon after arriving in New York in 1847 by way of Canada, he affiliated with the New York Ecclesiology Society and was its official architect. He became well known through publication of his book Ancient Ecclesiastical Architecture and Its Principles, Applied to the Wants of the Church at the Present Day (1850). For a time in the 1850s he had as partner in his firm architect Henry Dudley. Wills died unexpectedly in 1857 during construction of Christ Church Cathedral in Montreal.

Wills is credited with providing designs for three Episcopal parishes in North Carolina. The first project was for St. Paul’s Episcopal Church in Edenton: in 1848 he designed altar furnishings for the chancel to update the colonial church with its Federal period interior finish (see William Nichols). St. Paul’s was unique among the state’s colonial churches in having a well-defined apse containing the chancel, and Wills’s additions, including an altar rail, enriched the liturgical space in keeping with Ecclesiological principles.

For Trinity Parish in Scotland Neck, Halifax County, Wills supplied designs for a Gothic Revival brick church, which still stands as Old Trinity Episcopal Church, just outside the town of Scotland Neck. Picturesquely sited on a knoll amid a churchyard planted with venerable trees and shrubs, it features narrow lancet windows and a central bell tower enriched with corbelling.

The church was built in 1854-1855 for a parish established in 1831 by planter families, including the numerous Smith family, who shared a taste for fashion. Joseph Blount Cheshire, the priest who served Trinity as well as Calvary Episcopal Church in Tarboro (see William Percival), obtained the plans from Wills. In his history of the Smith family, Claiborne T. Smith quoted from Bishop Joseph B. Cheshire (son of the Rev. Joseph B. Cheshire):

The proposition for a new church building being made the three Smith brothers, William, Richard, and James, concurred in thinking that it was needed. They authorized the rector [Cheshire] to obtain such plan as might meet his views of what the church should be, and he wrote to Frank Wills of New York, one of the best architects in the country, and had plans and specifications prepared. There were no subscriptions solicited nor any attempt made to solicit money. The three brothers set their men [slaves] to work to burn the necessary brick and to get the lumber for the frame and floors and roof out of the forests. They employed skilled mechanics [unidentified] for such parts of the work as their slaves could not do, and within a comparatively few months the building was completed.

On the opposite side of the state, where the Episcopal church was making headway in the mountains under the leadership of the Rev. Jarvis Buxton, the small parish recently established in Asheville built a “neat, Gothic edifice” in brick from a design by Wills. Dedicated in 1852 by Bishop Levi Silliman Ives, an ardent advocate of the Gothic Revival style, Trinity Episcopal Church in Asheville was built by the prolific local contractor, Ephraim Clayton, who was also responsible for constructing Greek Revival churches for Asheville’s Baptists and the Methodists. Trinity was one of the last churches Ives dedicated, for later in 1852, controversy over Ives’s pro-Catholic views came to a head, and by the end of the year, Ives had converted to Catholicism. Whether Wills designed any other churches in the state is not known.