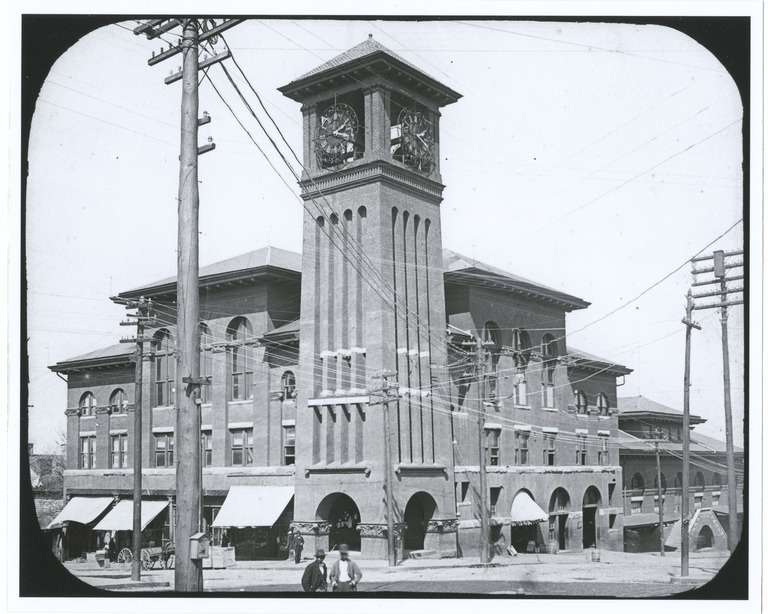 Glenn Brown (1854-1932), an architect from Virginia with family ties in North Carolina, designed buildings in Winston-Salem, North Carolina, in the Romanesque Revival style, but his most important contribution to the state was his role, as secretary of the American Institute of Architects, in nurturing the formation of the North Carolina Chapter of the AIA (1913).

After gaining a classical education from present Washington and Lee University, Glenn Brown studied medicine under his father, expecting to follow in his footsteps. To earn extra money, Brown learned mechanical drafting and rendered patent drawings in the evenings. By 1873 this part-time interest changed the direction of his career, and he entered the office of architect Norris G. Starkweather to learn the rudiments of architectural practice. In 1875 Brown enrolled at the Massachusetts Institute of Technology as a special student, the status accorded to those who wished to take the concentrated two-year architectural program. He then found employment with the contracting firm of Norcross Brothers, master builders of many works designed by architect Henry Hobson Richardson. The young Brown served as clerk of the works for their Cheney Building in Hartford, Connecticut. In 1879 he returned to Washington DC and began a diverse fifty-year career in the capital as a historian, an architect, and an organizer and leader of the architectural profession.

As a historian, Brown attained national fame for his two-volume History of the United States Capitol (1901 and 1904). He published many other works, including an analysis of the Octagon (the headquarters of the American Institute of Architects), and over a hundred articles on various architectural and professional topics. As an architect, he maintained a respected practice in Washington DC for forty-five years. Among his best known works in the capital, which range from Romanesque to various neoclassical styles, are the National Insurance Building (1890) on F Street; the Beale House (1907) on Massachusetts Avenue; and the Buffalo or Dumbarton Bridge (1913) on O Street. As an organizer, he took a key role in defining the national role of the American Institute of Architects, for which he served as secretary from 1898 to 1913. Among his accomplishments were the relocation of the AIA national headquarters to the Octagon in Washington in 1899, creation of a national AIA archive and library, founding the organization’s first journal, and increasing the national visibility and stature of the institution.

In North Carolina, Brown planned a few buildings early in his career, most in the town of Winston (in present Winston-Salem). In 1890, as reported in the Manufacturers’ Record on October 25, he designed a two-story house for W. B. Carter (the W. B. Carter House), to cost $6,000, a substantial sum for its day. In 1892, he collaborated with Willis E. Hall, a North Carolina cousin, in designing two major buildings in downtown Winston, both in strikingly bold Romanesque Revival style. Hall operated as supervising architect. The First National Bank of Winston was announced in the Manufacturers’ Record on March 26, 1892, and on March 21, 1896, the journal reported that the bank had occupied the building, which was described as Romanesque in style, in pressed brick and sandstone with terra cotta trim. One of the principal edifices in town was their Winston Town Hall (1891-1893), which was built by the local Miller Brothers, on a bid of $45,000.

The Manufacturers’ Record of August 15, 1891, reported that Brown and Hall had furnished plans for the Winston municipal building for Winston. In contrast to the ornate Forsyth County Courthouse (1893-1896), designed by Frank Pierce Milburn, the brick municipal building featured clean lines and forceful massing emphasized by a dramatic corner tower. It encompassed the city jail, armory, and market as well as administrative offices. Brown and Hall also reported in the Manufacturers’ Record (March 26, 1892) that they had prepared plans for a 100-room Renfro Hotel, to be built in Surry County of rubble stone, rustic plank, and shingle. It may have been the Renfro Hotel in Mount Airy, which once stood at the corner of Main Street and Pine Street. After Hall’s death, it appears that Brown did no further architectural projects in North Carolina.

Glenn Brown’s most lasting significance for North Carolina stems from his successful campaign as AIA secretary to expand the influence and membership of the organization. In 1901 he launched a national membership drive, sending invitations to architects across the nation to solicit applications for AIA membership. AIA bylaws required recommendations from current members who could vouch for the character of an applicant and the standard of his work, which tended to restrict membership. Several North Carolina architects responded to Brown’s 1901 initiative, but without AIA members in the state, they were unable to obtain recommendations from AIA members who personally knew them. Although this requirement was intended to prevent the admittance of unethical practitioners, in effect it delayed AIA expansion to North Carolina and other states in the South and West because so few architects in those areas were members of the Institute. Even in Atlanta, Georgia, architects struggled for years before they were able to bring together five AIA members to form a chapter in 1906.

Brown, who had strong ties with North Carolina, took a strong role in establishing the AIA in the state. An important step came when North Carolina native Louis H. Asbury became an AIA member in 1908 (he was recommended by Ralph Adams Cram and other AIA members who had known of him from his work associated with Cram’s principal building contractors). Soon after this, Asbury established an independent practice in Charlotte and became active in organizing the profession in western North Carolina. In 1913, North Carolina architectsRichard Sharp Smith (Asheville), Hill C. Linthicum (Durham), Garland Rose (Durham), and Willard C. Northup (Winston-Salem, see Northup and O’Brien) also became AIA members. (They and others had previously formed the North Carolina Architectural Association in 1906.) Linthicum had been working closely with Brown for a few years before in hopes of organizing a chapter. The five AIA members met in Greensboro on September 16, 1913 to organize a chapter and selected Linthicum as president, as Linthicum reported to Brown in a letter of September 17 (see Jackson and Brown, History of the North Carolina Chapter). Brown promptly obtained the approval of the board of AIA and enrolled the chapter on September 25. In addition to the institute members, the original chapter members also included Frank A. Weston, W. L. Brewer, Charles E. Hartge, James F. Gause, Jr., Albert Heath Carrier, William H. Lord, and Herbert W. Simpson. Despite obstacles, Brown persisted in his mission to expand the profession and the AIA, and nurtured the formation of key AIA chapters across the country, including Iowa (1903), Georgia (1906), Kentucky (1906), Louisiana (1910), Indiana (1910), Wisconsin (1911), North Carolina (1913), Ohio (1913), South Carolina (1913), and Texas (1913).