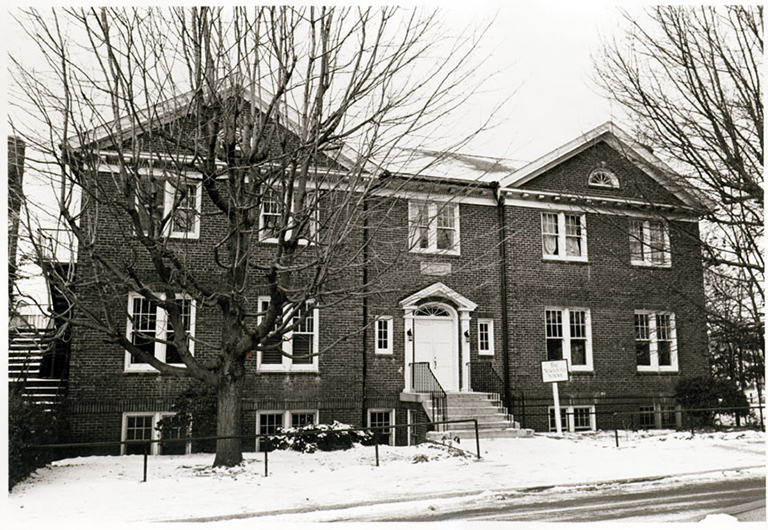 William Henry Lord (1864-1933), a native of Syracuse, New York, came to Asheville in 1899 and emerged as one of the most important architects in the city during the early twentieth century as well as a leader in the development of the architectural profession in the state.

According to an article in the Asheville Citizen-Times of September 20, 1903, before arriving in Asheville in December, 1899, Lord had resided in Syracuse and was associated with A. L. Merrick in the firm of Merrick and Lord, architects, until 1891. He then left Syracuse in that year and spent several years working for the United States government supervising building construction across the country for the war department. He married Helen Anthony of Poughkeepsie, New York, in 1896 in Chicago.

In 1899, Lord resigned from his government position and decided to “make his home in Asheville,” which was then a growing railroad and resort community. For a brief period, William and Helen resided with Helen’s sister Maud Anthony and her husband Octavius (Octave) Battle and their family. This family relationship linked William Lord to Octavius’s brother, the prominent Asheville physician Dr. Samuel Westray Battle and to the long established Battle family of Tarboro and Rocky Mount, North Carolina. William and Helen’s son, Anthony Lord (1900-1993), born soon after their arrival in Asheville, would become a prominent regional architect headquartered in Asheville. In 1900 William Lord completed construction of a house for his family at 267 Flint Street in the Montford neighborhood. (According to an interview with his son Anthony, William Lord was encouraged to move to Asheville by architect Richard Sharp Smith. One of Lord’s first projects was an addition to the Clarence Barker Hospital at Biltmore Village,where the original building was designed by Smith. There is no evidence that Lord formed a lasting association with Smith.)

Lord’s architectural practice in Asheville began promptly after his arrival and attracted the attention of the local newspaper. The Asheville Citizen-Times of September 20, 1903 noted Lord’s work on several substantial projects, including the enlargement of the Clarence Barker Memorial Hospital at Biltmore—of which Lord’s in-law Dr. Samuel Westray Battle was medical director; school buildings at Valle Crucis; offices for the Asheville Street Railway Company; and various residences in Asheville, plus the “new National Bank building” in Waynesville.

A decade later, the Asheville Citizen-Times of September 29, 1912, noted Lord’s continued productivity. Commending the city’s architectural character, the writer noted with pride that unlike many cities of its size which had to employ outside architects for their principal building projects, “Asheville is an exception to the rule, and instead the work of its architects may be found in a radius of many miles.” The article singled out Lord as being “among the best known of the local architects,” and stated that since coming to Asheville in 1900, he had “been actively involved with the phenomenal growth and progress of the city,” and had designed some of its “most substantial business structures and handsomest residences,” as well as notable buildings elsewhere. Among those noted in the 1912 article were the Asheville Electric Company on Patton Avenue, the Palace Theater, and the First Church of Christ, Scientist as well as residences such as the Dr. Marion C. Millender House, the George S. Powell House, and the William H. Westall House. There were also banks in Canton and Bryson City, North Carolina. Other projects soon followed as Asheville’s growth mounted through the 1920s. Especially significant among his projects beyond Asheville was his design for the Champion Fibre Company Main Office (1918) in Canton for the giant industrial company in western North Carolina. After Anthony Lord completed his studies at Georgia Tech and Yale, he joined his father’s firm in 1929. For the Lords and other architects, the Crash of 1929 and the Great Depression created a near hiatus in building.

Well trained in classical architectural styles, William H. Lord designed residential, commercial, and institutional buildings, in addition to a number of schools, and his buildings display sound proportions and tasteful ornamentation. His early work in Asheville consisted primarily of houses in the Montford neighborhood, including his own, which incorporated elements of the Colonial Revival and Shingle styles. Around 1910 Lord worked on two important church buildings, solidifying his reputation as a renowned local architect. He designed the interiors for the First Church of Christ, Scientist, a handsome Neoclassical Revival-style building designed by S. S. Beman of Chicago and constructed 1909-1912. The orange brick church features a central, pedimented Doric portico and a hip-roof auditorium. Lord also served as the supervising architect for the rebuilding of Trinity Episcopal Church in 1912-1913. Designed by noted architect Bertram Goodhue of the Boston firm of Cram, Goodhue, and Ferguson, the church is a restrained Tudor Gothic Revival-style brick structure with granite trim. The church projects are indicative of the versatility and high standards of Lord’s own practice.

Lord designed the E. D. Latta Nurses’ Home, a three-story Neo-Georgian building completed in 1929 across Woodfin Street from the hospital. The three-story, L-shaped, hip-roof, brick building features include rusticated brickwork on the first story, limestone belt course, and a pedimented entrance topped by a Palladian window. Lord’s design for the YWCA on Grove Street, built 1924-1925, consists of a two-story, hip-roof Neo-Federal main block with a gymnasium wing located to the rear. Two pedimented pavilions frame the façade, which also features soldier course water table and lintels, dentil cornice, modillions, demi-lune windows in the pavilion pediments, classical entrance surround, and an elliptical fanlight over the single-leaf entry.

Among his numerous school projects, Lord designed the Asheville High School (originally called the David Millard High School) in downtown Asheville in 1916. Located at the corner of Oak and College streets in downtown Asheville, the three-story brick Tudor Gothic-style school displayed a central pavilion, curved parapets, large window groups, and limestone trim. The school cost $300,000 to build, but was delayed such that when it opened in September 1919, it was already too small for the student population. Lord also designed the two-story Flat Creek School in 1926 north of Weaverville and the stately two-story-plus-basement Biltmore High School, completed in 1927. Located on slight rise overlooking Hendersonville Road, the brick and limestone Biltmore High School featured an auditorium block with pedimented portico at the front of the building, an L-shaped classroom wing at the rear, and a three-story entrance pavilion set at a forty-five degree angle where the auditorium and classroom wing meet. The school projects designed by William Lord were part of a broader statewide trend in the 1910s and 1920s of substantial public investment in consolidated high schools and elementary school facilities.

Unlike two of his fellow architects in Asheville, Richard Sharpe Smith (1852-1924) and Douglas D. Ellington (1886-1960), Lord’s architectural legacy is characterized by substantial, conservative buildings that formed the solid framework of Asheville’s distinctive architectural character. Whereas the prolific Smith contributed stylistically unique buildings heavily influenced by English antecedents and the Arts and Crafts movement, and whereas Ellington’s brief period of activity in Asheville was marked by an innovative amalgamation of his training at the Ecole des Beaux-Arts, modern Art Deco stylistic elements, and local context, Lord was a more devout classicist in his designs. His adherence to more traditional architectural styles does not diminish his work in any way, but serves to distinguish Lord’s buildings, which helped to define a number of Asheville institutions and businesses.

W. H. Lord died tragically in an automobile accident near Salisbury in July 1933, following the summer meeting of the North Carolina chapter of the AIA in Hickory. On his way to Tarboro to visit relatives, Lord was riding with Greensboro architect Harry Barton when their car was struck by an oncoming vehicle and forced off the road, where it overturned and burst into flames. Some of the records of the NCAIA were lost in the fire. Just prior to his death, Lord had been elected president of the North Carolina Board of Architectural Examination and Registration at the meeting in Hickory. William Lord is buried at Riverside Cemetery in Asheville.

At Lord’s death in 1933, a writer for the local newspaper lauded his character as well as his accomplishments: “For more than thirty years he practiced his profession in this community. He drew the plans for innumerable buildings—schools, hospitals, churches, business structures and homes. Utterly incapable of jerry-built construction, he devoted to every project his best thought and energy and refused to consider his task ended until the job had been finished with scrupulous fidelity to specifications. He avoided the garish and showy. He sought always after that beauty which is a happy blending of simplicity and usefulness.”

Note: The Pack Library in Asheville contains a large collection of architectural records for William H. Lord (and Anthony Lord). In the accompanying building list, the notations [Pack ARD or SA plus a number] indicate these records. The building list here includes only a portion of the contents of the collection. Further research may determine the status of others.