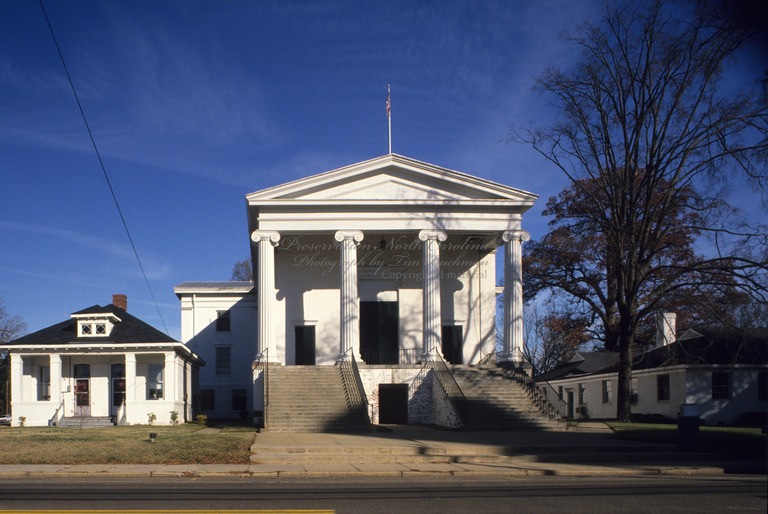 Azariah J. Riggs (ca. 1819-1864) was a carpenter and builder from Connecticut or New York who worked briefly in eastern North Carolina in the 1850s. In 1860 he was listed in the United States census as a carpenter from Connecticut, aged 41 and known as A. J. Riggs, living in the railroad town of Goldsboro, North Carolina. He headed a household that included his wife Eliza H., a native of New York, and three children, with the eldest two, Clarence and Elba, born in Connecticut and the youngest, Ugene, aged 3, born in North Carolina, dating the move. (In 1850, he was listed as Azariah Riggs, a joiner and native of New York living in Meriden, Connecticut, with his wife Eliza H. and son Clarence.) Riggs was one of numerous builders who moved to North Carolina during the prosperous building period of the 1850s, attracted especially to towns beside recently completed railroad tracks.

While in Goldsboro in 1855, A. J. Riggs, identified as “an excellent Master Builder,” agreed to execute the substantial carpentry work for St. Stephen’s Episcopal Church, a Gothic Revival brick building, from plans begun by the rector and “perfected” by architect John W. Priest of Newburgh, New York. James R. Murray, a mason from Georgia, did the brickwork. Doors, windows, and sash were made in New York. Soon after the church was completed, Riggs also contracted to build the Northampton County Courthouse (1858-1860) in Jackson, one of the handsomest neoclassical courthouses in the state. The building committee already had plans and detailed specifications for a temple-form brick edifice with portico, “Iron Ionic capitals and bases, “ and a “broad grecian cornice.” Some sources credit West Point trained planter H. K. Burgwyn with planning the courthouse. Riggs completed the $10,000 project in 1860. Early in 1861, Riggs advertised that he was back in Goldsboro and ready to receive orders for buildings, but probably no projects came his way because the Civil War began within a few months. In June, 1861 Azariah J. Riggs, builder from Wayne County, aged 39, enlisted in North Carolina’s troops at Fort Macon and became a lieutenant. Wayne County estates papers indicate that he died in 1864. By 1870 his widow, Eliza H., and their children were living in the state of New York.