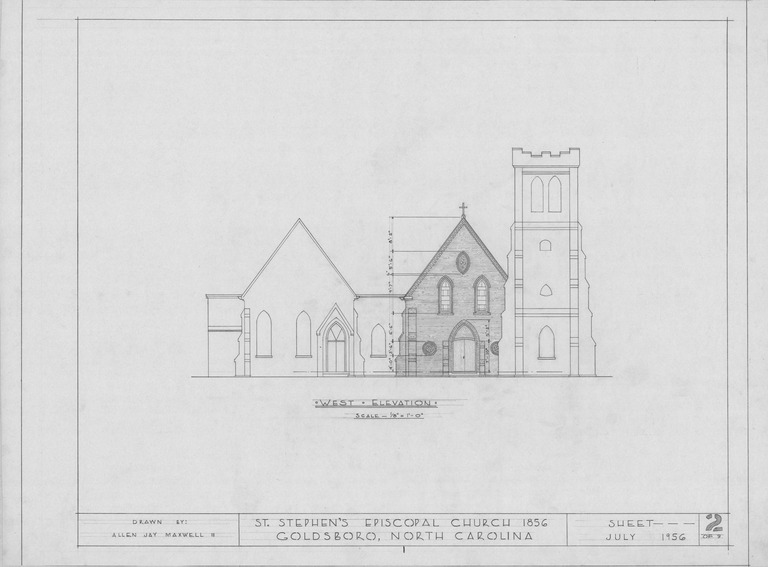 John W. Priest (1825-1859), an architect based in Newburgh, New York, attained prominence as a church architect in the 1840s and 1850s, but his bad health and early death cut short his career. As noted by architectural historian Phoebe Stanton in The Gothic Revival and American Church Architecture; An Episode in Taste (1997), Priest was a founding member of the American Institute of Architects and the New York Ecclesiological Society, an organization that promoted ideals of authentic medieval architecture for the form, plan, and materials of Episcopal churches. His articles on English church architecture appeared in the society’s publication. Stanton supplies a note from a friend of Priest contributed to his obituary that cited “monuments of his genius” in several states including North Carolina.

St. Stephen’s Episcopal Church in Goldsboro, N. C., is Priest’s only known work in North Carolina and one of the few known surviving churches built from his designs. During the 1840s and 1850s, North Carolina Episcopal clerics attuned to national trends turned to northern architects to provide Gothic Revival designs for their parish churches. The best known is Christ Episcopal Church in Raleigh, designed by New York architect Richard Upjohn. Most of these projects took place by mail, without visits from the architects to the site.

According to a brief, handwritten history of St. Stephen’s in the parish register, in 1855, the new rector, Francis Fitzgerald, took a leading role in the planning and execution of the brick, Gothic Revival church in the young railroad town of Goldsboro. This history reports, “A plan of an ‘Early English’ Gothic church was prepared by the Rector, 70 feet by 25 feet inside, and adopted. The Drawings for this plan were afterwards perfected by a [superior?] Architect Mr. John W. Priest of Newburgh New York.” The bricks for the church were made locally. The “mason work was performed in a substantial manner by Mr. James R. Murray, a mason from Georgia. All the substantial wood work was done by Mr. A. J. Riggs an excellent Master Builder, while the doors, windows, and sash were made in New York city under the [gaze?] of Mr. J. W. Priest the architect of the church.” The extent of Priest’s role is not further explained. Raleigh builder Charles Palmer has also been associated with the church but is not mentioned in the parish register account. Ground was broken on August 8, 1856, and construction proceeded under the supervision of the rector. The building was ready for use in May 1857.

Although expanded later, the original section of the church well exemplifies the “Early English” Gothic style promoted by Priest and other Ecclesiologists and built in small towns in the South and elsewhere by Episcopal priests in collaboration with northern architects.