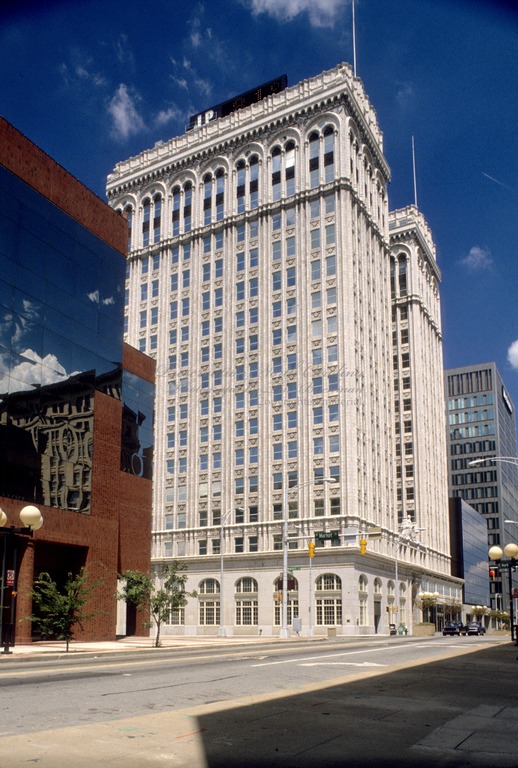 Charles Conrad Hartmann (1889-December 31, 1977), architect, moved from New York to Greensboro in 1921 to design the Jefferson Standard Building and established a prolific and long-lasting practice. In the mid-1940s he formed the practice of Charles C. Hartmann, Architects, with his son Charles C. Hartmann, Jr., a firm herein referred to as Hartmann and Hartmann; his post World War II work is discussed as part of that firm.

Charles C. Hartmann was born in New York, the son of Swiss and German immigrant parents. He recalled in a 1975 interview that as a youth he aspired to be an artist, but his father, a Swiss naval engineer, convinced him to devote his artistic abilities to a more practical profession. In 1905 he became an apprentice in the New York architectural firm of Warren and Wetmore, assisting in the design of Grand Central Terminal’s main lobby ceiling and working on other aspects of that project. He also worked for the renowned firm of McKim, Mead and White in the evenings, designing a drop curtain for the Havana Opera House and other interior elements for a theater and a church.

In 1907 Hartmann began work as a draftsman for noted New York architect Charles E. Birge and studied in the evenings in one of many Beaux-Arts ateliers sponsored by New York architects. He went to Boston to take architectural courses at Boston Tech (MIT), but did not enroll in a degree program. He returned to New York about 1913 to work for William Lee Stoddart, whose firm specialized in hotels across the country. Hartmann moved up from draftsman to associate partner before he left the firm in 1921. In the late 1910s, Hartmann began to visit North Carolina to supervise progress of two Stoddart commissions for which he was chief designer: the Sheraton Hotel in High Point and the O. Henry Hotel in Greensboro.

Hartmann impressed the Greensboro business community, and in 1921 Julian Price, financier and vice-president of Jefferson Standard Life Insurance Company, sent J. E. Latham, a member of the company’s board, to New York to invite the young architect to come to Greensboro. He promised him the prize commission for a $2.5 million office building that would be headquarters for the firm, with the condition that Hartmann open a permanent practice in Greensboro. Hartmann accepted the offer and opened his office in Greensboro in 1921, which operated until his retirement in 1966. He later commented that the lack of wealthy contacts in New York was a major factor in his decision to move to Greensboro. He found in Greensboro a small but active architectural professional community that included the prominent architect Harry Barton, who had moved to the city a decade earlier.

Hartmann’s inaugural project, the Jefferson Standard Building (1921-1923) was one of the largest and most prestigious commissions in the state at the time. The 17-story, twin-towered skyscraper was the tallest in the South at its completion in 1923—a magnificent Beaux-Arts composition combining classical, Gothic Revival, and Art Deco motifs in pale granite and terra cotta that instantly became an icon of Greensboro. Its construction placed Hartmann in an advantageous position in a rapidly growing region.

He soon gained commissions for major office buildings, banks, and other structures from High Point and Burlington to Wilson and Fayetteville. These were primarily of classical and Art Deco design, and many were the first or tallest skyscrapers in their communities. One of Hartmann’s favorites was the neoclassical, granite-faced Cumberland National Bank (1923-1926) in Fayetteville, which features a classical shaft above a base of Ionic columns, an order that relates it to the nearby antebellum Market House. In the late 1920s he introduced Art Deco motifs at the First National Bank of Wilson and the Atlantic Bank & Trust Company Building in Burlington, the latter a skyscraper locally admired for its “advanced ideas in this type architecture.” In Greensboro’s F.W. Woolworth Building, Hartmann blended Art Deco and classical elements in elegant street façades; the building is best known as a landmark in the American Civil Rights movement as the site of the student sit-ins that began Feb. 1, 1960.

In contrast to his commercial and institutional work, Hartmann planned residences in picturesque modes that featured natural materials. He was instrumental in shaping the development of Irving Park, an elite suburb of Greensboro, where he designed 20 residences, of which only a few have been identified. For his patron, Jefferson Standard president Julian Price, he designed Hillside (1928-1929), a luxurious suburban residence in towered Tudor Revival style, which he planned soon after designing a much smaller Tudor Revival house for Price’s secretary Mary R. Taylor. In a departure from formality, for Blue Bell Overall Company president C. C. Hudson he created a massive, dramatically horizontal, log bungalow, Idlewood (late 1920s), which was dismantled in 1994.

Hartmann maintained an office in Greensboro for the rest of his long and prolific career, becoming one of the state’s leading architects between the World Wars. His firm planned at least 50 major buildings between 1922 and 1946. Unlike many, his firm stayed busy during the 1930s, averaging $1 million worth of construction per year even during the Great Depression. His work in this period included schools, hospitals, and apartment houses, such as the Country Club Apartments in Greensboro, which followed the newly popular “super block” layout.

A leader in his profession, Charles C. Hartmann, Sr., was a member of both the North Carolina Architectural Association, serving as its president, and the North Carolina Chapter of the American Institute of Architects. In 1920, he had been licensed to practice architecture in North Carolina with certificate #112. In 1941 he was president of the NCAA and secretary-treasurer of the NCAIA. He played a key role in the unification of the two organizations in the 1940s. He was also a member of the national American Institute of Architects. Locally, he was active in community organizations, including the Greensboro Chamber of Commerce, chairman of the City of Greensboro Board of Building Appeals, director of Greensboro Lions Club, member of the Rotary Club, Country Club, Manufacturer’s Club, Knights Templar Masons, Shriners. Hartmann also employed and encouraged other young architects, including Edward Loewenstein, who became one of Greensboro’s leading modernist designers in the postwar era.