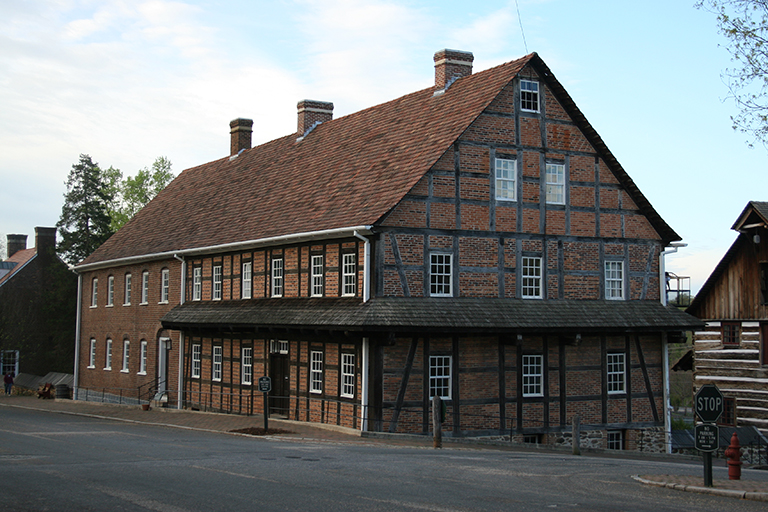 Christian Triebel (November 6, 1714-April 16, 1798), was a master carpenter who, like the mason Melchior Rasp, brought his Old World skills to the Wachovia Moravian settlement in North Carolina and helped construct buildings in Salem and elsewhere that represent the state’s sole surviving examples of European building traditions transferred directly to colonial North Carolina. Among his best-known surviving works is the massive, half-timbered Single Brothers House in Salem, which exhibits his skills in traditional heavy framing that defined Salem’s early architecture.

Little is known of Triebel’s early life, except that in his memoir he recalled his younger days as something of a hooligan in Henneberg before he affiliated with the Moravians and converted to a pious life. He left Europe in November 1754 and spent a brief period in Bethlehem, Pennsylvania. He arrived in Bethabara from Bethlehem, Pennsylvania on October 11, 1755, just two years after the pioneering group of Moravians began the community in 1753. (For more on the Wachovia settlement, see Frederic William Marshall.)

At first the settlers had managed with simple log structures, including one that was already standing on the site; they coined a term, Aufgeblockt, for erecting a log building, as contrasted with the familiar word Aufgeschlagen, the term for raising a frame structure, a method the Moravian leaders viewed as superior to log construction (Fries, Records of the Moravians, Vol. I, p. 287). To erect substantial framed structures required the skills of a trained carpenter such as Triebel. In early November, Triebel was joined in Bethabara by the mason Melchior Rasp, and they and other men kept busy constructing buildings in Bethabara.

After the site was selected for the new principal town of Salem in 1765, Triebel at age fifty-one faced what must have been the greatest building challenge of his life—the construction of a new town in the wilderness with substantial and well-crafted buildings erected with traditional techniques. In January 1766 Triebel was a member of the first crew of workmen sent from Bethabara to Salem to construct a temporary log house for the workmen. By March of that year he was busy selecting timber for the first permanent buildings in Salem, and on April 23, Triebel and his apprentice Strahle (Strehle) went to Salem and “began work on the framing for the first house to be built.” Brother Traugott Bagge said of Triebel in November 1766, “Br. Triebel is surely a faithful brother on his part, and although he often has much to object to and expresses himself somewhat roughly, it must be said that he has worked very hard at his trade, made harder because he has always been alone and that is just now for us and for him the most difficult thing in Salem. Otherwise I regard him as one of the most faithful in the Choir.”

Triebel’s skills were essential to construction of Salem’s fachwerk, or half-timbered, buildings, which employed a traditional techniques he knew from Europe. Raising the heavy structures was sometimes dangerous, especially for the larger ones but even for the smaller ones. On January 8, 1766, while Triebel and other men were erecting the Builders’ House in Salem, “Br. Triebel, chief carpenter, fell from top of wall while helping place the roof timbers, not hurt” (Fries, Records of the Moravians, Vol. 1, p. 323). In 1769, “In raising the Single Brothers house in Salem, a piece of timber fell, taking with it a wall which was not yet secured; it might have swept a number of Brethren from the second story to the ground, or have crushed others as it fell, but the angels guarded them and no one was hurt” (Fries, Records of the Moravians, Vol. I, p. 383). In October 1778 Triebel broke his leg in a fall while working on the Bethabara mill; this injury plagued him for the rest of his life.

By 1769, with seven dwellings, a workmen’s house, tannery, and the large, Single Brothers House constructed, administrator Frederic William Marshall began consulting with Triebel and Melchior Rasp on construction of Salem’s principal congregational building, the Gemeinhaus (Salem), to serve for worship, community meetings, and other purposes. Rasp constructed the first story of stone, and Triebel framed up the second story in the half-timbered method used for the previous buildings. It was completed in 1771. In 1772 Salem was deemed ready to accept the Moravians who were assigned to move there from Bethabara to practice their trades. In 1774 Triebel built his own house at his own expense on Lot 59 in Salem (at the corner of present Academy Street and Main Street). This structure was approved by the Congregational Council on the condition that he would house the night watchmen in an upstairs room, which he did for several years.

Although in the founding years at Bethabara, the Moravians had practiced “common housekeeping,” with their tools owned by the community and all working for the common good, once they moved to Salem, a new system was put in place wherein the tools were held by the individual craftsmen, and they were paid for their work at rates agreed upon with the community council. The status of master workman was also determined by the council, and if “a profession is being carried on in the town all other Brethren who wish to work in it, whether they come from Europe or Pennsylvania or grow up here, shall be considered as journeymen under the Master workman, and shall be personally responsible to him (Fries, Records of the Moravians, vol. II, p. 724). Triebel became the master carpenter.

For some projects, such as a bridge over Muddy Creek, the congregational leaders contracted with outsiders after consultation with Triebel. But in 1775, when planning construction of the waterworks, which involved a system of wooden pipes to deliver water to Salem, “it was not approved to give the contract to an outsider and Triebel, Krause and Frederick Beck said they would do the work for the price named.” The contract drawn up with Triebel in 1776 stipulated, “to square the wood, we keep the old price i.e. per 100 ft. 12 sh. [shillings]. As to the other carpenter work we shall make a special contract with him.” In December 1777, Johann Gottlob Krause, Triebel and another man stated that they were “willing to undertake the bringing of water pipes to the town. . . . Br. Triebel has agreed to cut and bore the pipes according to directions and a contract will be made with him per yard.” It was agreed that he should have “4d. Congress money for each log he cuts for pipe and 3.5d. of old money for each foot bored.” (The difference in the money referred to the financial situation during the American Revolution.) In early January 1778 Triebel was cutting trees for the project, which at age sixty-four must have been demanding work even with the help of his apprentices and other men. By mid-month, he asked the governing board for 5d. instead of the 4d. agreed upon (possibly reflecting wartime inflation). The adjustment was made, and by February he was boring pipe again. But the American Revolution, other construction work, and an accident at the Bethabara sawmill slowed his progress on the waterworks.

During the war years, Triebel busied himself making gutters for the Gemeinhaus and the store. He also supplemented his income by selling gravestones and making well pumps. During the war, troops were housed in his home, and later part of it was rented to the Boys School. Also in 1780 Triebel entered a contentious period when another man wanted to buy his wood boring equipment and replace him at pipe making. Triebel refused and continued making the pipes until the mid-1780s. Triebel also worked as a gravestone cutter, and although this task was seldom mentioned in his records, it is noted that he fashioned and sold stone markers—which in the Moravian tradition were simple square or rectangle markers inscribed with only the name and lifespan of the deceased.

As the postwar building boom accelerated, Salem again required the master carpenter’s construction skills. In February 1784, Frederic William Marshall lamented that the community was “handicapped by the lack of workmen. Our master carpenter Triebel, is in his seventieth year,” and along with master mason Melchior Rasp, was “in the sick room.” Triebel evidently recovered sufficiently to serve Salem for a few more years. The congregation called on him to assist in completion of the new, brick Salem Tavern II in 1784, for which Johann Gottlob Krause was the brickmason. For the 1786 Single Sisters House, another large brick building, it was decided “to keep Triebel for the frame work of the Sisters House because we are doubtful to leave this to Strehle [Triebel’s former apprentice] by himself.” Triebel responded that he was “willing to help with the construction as much as possible for 4 sh. [shillings] a day.” This was the last project in which Triebel was mentioned; with his health failing and his old leg injury troubling him, he was no longer able to work, and his memoir states that he was forced to give up his trade about 1786-1788. He had employed his skills to make an entire town rise in the wilderness, and his surviving works represent some of the principal examples of first-generation German immigrant architecture from colonial America.