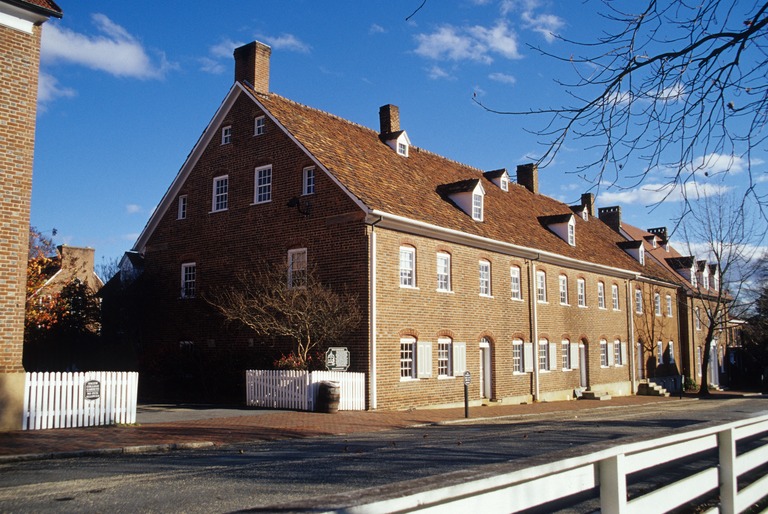 Abraham Loesch (1765-1843), born in Bethabara, North Carolina, was a brickmason and master mason in Salem for several years in the late eighteenth and early nineteenth centuries. Like his fellow brickmason Johann Gottlob Krause, he was part of the first generation of Moravian artisans who was born in the Wachovia settlement in North Carolina and who followed the members of the previous generation, such as brickmason Melchior Rasp, who brought their skills from the old world and constructed the first permanent buildings in Wachovia.

When he was two years old Abraham Loesch moved with his family to the Moravian community of Bethlehem, Pennsylvania, where he attended school at Nazareth Hall and was trained as a mason in Christiansbrunn, Pennsylvania. Between 1782 and 1785, according to his memoir (life story) in the Moravian archives, Loesch moved back to Wachovia and settled in Salem; because the elderly master mason Rasp had died early in 1785 after several years of bad health, the Moravian communities in Wachovia sorely needed a mason. Loesch’s first known project was the masonry work of the Bethabara Church and Gemeinhaus in 1785.

Loesch was also recorded in the minutes of the Aufseher Collegium of February 20, 1786 as beginning to do the masonry work on the Single Sisters House in Salem, but in August, the minutes noted that Loesch had not decided whether to stay in Salem as a mason. He evidently chose to stay, for later that year he was listed as a mason for the Single Brothers House Addition. He also built a bake oven for the Gemein Haus in Salem.

Although Loesch’s personal qualities and perhaps the quality of his work sometimes led to conflict with local leaders, nonetheless Johann Krause recommended that he be named a master mason in 1787. After the post-war building boom slowed in 1786, Krause had planned to return to Bethabara and the pottery trade, but the council dissuaded him. He recommended Loesch as a master in part because Loesch wanted higher pay, and in part because Krause needed help on building projects in Salem. But this arrangement did not prove satisfactory, for in April of 1788, the council noted, “concerning the bad mason work that is done at times it was suggested to have Gottlob Krause employed as the master mason.” In 1788 Loesch traveled back to Pennsylvania and learned the fulling trade, and in 1789 he returned to Salem and constructed his own fulling mill and house. He became a full-time fuller, holding the rights to indigo dye in Salem, and did only occasional masonry work as needed or when time permitted.

In the summer of 1791 Loesch was hired to do the masonry work on the Peters Creek Bridge—a bridge cited as the only one across Muddy Creek that was accessible during flooding. A major project came in 1807 when Loesch was appointed to oversee the construction of the large, brick Bethania Moravian Church as well as hiring the workers to construct it. In 1815 and 1816 Loesch placed advertisements for wood water pumps as far as Raleigh in the Raleigh Star and the North Carolina State Gazette. His subsequent career remains unknown.